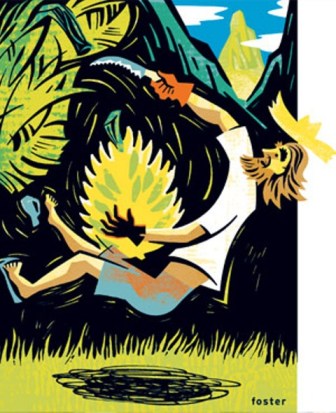 After many years in dorm rooms and cinderblock “starter” apartments, I moved to Maui in 1974 and rented a spacious redwood house in Iao Valley.

Those were the days.

The house sat on a small but scenic flag lot opposite Kepaniwai Park. Out the back door, a mile of mountain soared into the mists. The front porch overlooked a vine-laced cliff and the dancing drumbeat of Iao Stream. As a bonus, a border of rocky soil skirted the fence line.

Having missed the prime Maui hippie years, I was tardy getting “back to the land.” By the time I grew my beard and ponytail to full bushiness, the island’s proto-hippies were selling real estate.

My real estate was a belt of rocky red dirt that probably hadn’t been tilled since Kekaulike the Thunderer’s time. But that didn’t deter me. I was young. I was strong. I was ignorant. And I was ready to plant.

We are staaaaarrr dust; we are goooollldden, and we’ve got to get ourselves back to the gaaaaaaaaaaaaarrrrden!

After several months in the garden, I was not feeling too golden. My full-grown carrots were the size of baby toes. My beets were as skinny and wrinkled as li hing mui. Squadrons of moths, fruit flies, aphids, and leafhoppers had reduced my other crops to spittle.

In desperation, I sought out my friend Archie at his little farm in Keokea.

“Iao Valley?” he mused. “Well, bananas for sure. I’ve got some keiki you can have. Pull your truck around back.”

A few days later, twenty-five deep holes ringed the Iao Valley house. After filling them with horse manure from Wally Rodgers’s Waikapu paddock, I dug the stumpy banana corms into the holes, watered them deeply, and stepped back.

Almost overnight, thick, brawny banana plants thrust from the earth. The moist tropic air rustled and murmured with the sound of their broad, ever-unfolding leaves. Soon sticky purple flowers appeared, then fell away to reveal hand after hand of plump green bananas. It was miraculous.As the bananas ripened and the bunches lengthened, I proudly propped up their sagging trunks. I pruned and watered and weeded. I plucked off fat caterpillars that cut and rolled the leaves into tattered cigars.

What I forgot to do was think ahead. All twenty-five of my robust, well-fertilized plants were fruiting at the same time, with dozens of bananas in each bunch. Who was going to eat them all?

I also forgot the principal rule of banana harvesting: cut from the bottom! When my first bunch was ready, I proudly stretched up to my full height and sawed the stalk through from the top. The entire bunch ripped free, and ninety pounds of falling bananas flattened me like a linebacker.

After I could walk again, I cut the remaining bunches hand-by-hand. But even in segments, they still represented a ton of fruit. Nishiki’s market in Wailuku kindly took some of the hands, but the rest rode around in the back of my truck while I accosted startled pedestrians at intersections.

I eventually disbursed them all, but I had to twist a lot of arms. Now if someone asks me for advice about starting a garden, I just say: “Hey! I’ve got some banana keiki you can have. Pull your truck around back.”