“Amongst the articles which they brought to barter this day we could not help taking notice of a particular sort of cloak and cap, which, even in countries where dress is more particularly attended to, might be reckoned elegant. . . . The ground of them is a net-work, upon which the most beautiful red and yellow feathers are so closely fixed, that the surface might be  compared to the thickest and richest velvet, which they resemble, both as to feel and glossy appearance.” 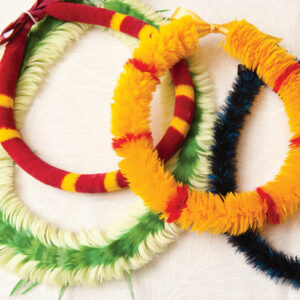 The first settlers from the Marquesas brought the art of feather work to Hawai‘i 1,500 years ago. By the time Captain Cook arrived, the Hawaiians were making magnificent feather lei, cloaks, capes, helmets and kahili (royal standards)—cherished symbols of wealth, prestige and power that could be owned and worn only by ali‘i (Hawaiian royalty). Among the handful of native birds whose feathers they harvested, most valued were those that yielded the royal colors: ‘i‘iwi and ‘apapane for red, ‘o‘o for pale yellow, and mamo for a deeper gold.

Long ago, lei were the only feather adornments women of noble rank were allowed to make and wear. The tedious work involved sorting the feathers by size and color, tying them in small bunches and fastening the bunches to an ‘olona-fiber cord. How the feathers were cut and placed created different patterns and textures. Wili poepoe lei were wispy and fluffy, while feathers in the kamoe style were bound together flat, in a “sleeping” position, so the finished product resembled a rope. Pauku lei featured solid bands of alternating colors, and the pani‘o technique produced a spiral of various hues.

Honolulu’s Bishop Museum claims the largest collection of feather work from ancient times, but some of these items, considered too fragile for exhibition, are stored away in vaults, under careful lighting and climate control.

Fortunately, the craft itself endures, though lei are the only traditional Hawaiian feather works created on a regular basis. Since many of the birds that once were abundant feather sources are extinct or endangered, modern-day artisans use goose, pheasant, guinea hen, grouse, chukar, peacock, chicken, turkey, duck . . . feathers of virtually any birds that are not an endangered species.

It’s 9 a.m. on a Tuesday morning, and Aunty Mary Lou’s Na Lima Mili Hulu No‘eau is abuzz with activity. Five women are seated around a table near the entrance to the cozy Kapahulu, O‘ahu, shop, chatting and laughing as they set out materials and tools for their intricate projects. They’ve come for their weekly feather-work class, taught by shop owner and master feather worker Paulette Kahalepuna.

Na lima mili hulu no‘eau translates as “skilled hands touch the feathers,” but as their gorgeous lei and hatbands attest, Kahalepuna’s students do much more. Many of them blossom into noted feather workers whose stunning creations can sell for over $1,500.

For Kahalepuna, feather work is a family legacy. Her late parents, Paul and Mary Lou Kekuewa, were considered the foremost proponents of the art. The Honpa Hongwanji Mission of Hawai‘i named Mary Lou a Living Treasure in 2003; two years later, Paulette and Mary Lou received the O‘o Award from the Native Hawaiian Chamber of Commerce. The Historic Hawai‘i Foundation bestowed all three Kekuewas with Preservation Awards for their efforts in perpetuating the Hawaiian feather arts—Kahalepuna in 1999 and her parents in 2000. (Paul Kekuewa, a retired tugboat captain, was adept at making kahili and capes.)

In 1976, Paulette and Mary Lou coauthored the book Feather Lei as an Art.

“My mother began the tradition of feather work in my family,” Kahalepuna says. “In the mid-1950s, she volunteered as wardrobe mistress for Aloha Week [now known as the Aloha Festivals]. That was how she met Leilani Fernandez. One day, Leilani told her, ‘Mary Lou, you’re fixing the pa‘u [riding skirts], kïhei [capes] and malo [loincloths], but the lei and kahili also need to be repaired.’ Mom said, ‘I don’t know how to do that,’ but Leilani said, ‘I do, and I can teach you.’

“And so at lunchtime, instead of just sitting around talking story, Mom learned how to work with feathers, eventually teaching classes from Kekaha on Kaua‘i to Pahala on the Big Island.”

Many of Kahalepuna’s students blossom into feather workers whose stunning creations can sell for over $1500.

In 1962, when Kahalepuna was a junior at Kamehameha Schools, she took a work-study class at Bishop Museum from the late Dr. Donald Kilolani Mitchell, a renowned Hawaiian scholar. “I needed extra credit for that class, and I asked Mom to help me make a feather lei. That was my first hands-on experience with feather work.”

During the course of completing two twelve-inch lei, Kahalepuna discovered that simply preparing the feathers—washing, drying, clipping and sorting them—can take up to ten hours. Depending on the complexity of the design, constructing a lei can require an additional ten to seventy hours of meticulous work.

And for Kahalepuna, a lifetime of dedication. She opened her 700-square-foot haven twenty years ago with her parents; her mom was the “Aunty Mary Lou” of the homey little shop. Today Paulette’s daughter Mele and granddaughter Taryn assist her at workshops she leads statewide for museums, art galleries, cultural conferences, and halau (hula schools).

“For me, sharing cultural insight is important,” Kahalepuna says. “I can’t do a make-and-take kind of class: Open this kit, put together the materials, pau [done]. I want my students to know what birds the feathers were taken from, who did the work in olden times and what that work involved.”

Students decide whether they want to make a lei or a hatband; both require time, commitment and mastery of the proper technique. “Hatbands are hand-stitched, lei are hand-tied,” Kahalepuna says. “There’s no quick or easy way to make either of them.”

Historians aren’t certain when feather hatbands came into being, although it obviously was after Western explorers and traders introduced hats, thread and metal needles to the Islands. Also, most of the early hatbands incorporated feathers from the pheasant, an introduced species. “So when were pheasants brought here?” Kahalepuna asks. “We don’t know, but since it takes a lot of feathers to make a hatband—thirty to forty feathers in an inch—the pheasant population must’ve been well established in Hawai‘i when the hatbands were first made.”

It’s plausible that nineteenth-century paniolo (cowboys), farmers and ranchers literally had a hand in this. “There were plenty of pheasants, chukars, wild turkey and other birds in the mountains and on the range,” Kahalepuna says. “They killed the birds for food, admired the feathers, and instead of throwing them away, they came up with the idea of making hatbands. When you look at old pictures of paniolo, many of them are wearing hats with hatbands.” By the turn of the last century, feather hatbands were very popular; whenever men dressed up in their finest clothes, they wore felt or Panama hats adorned with feather hatbands.

In Kahalepuna’s opinion, traditional crafts such as feather work are as important to the Hawaiians’ cultural identity as their language, beliefs, customs, food and music. She urges those who own feather lei and hatbands to “Respect the artistry. Honor the native birds. . . . Celebrate the fact that you possess something beautiful that has been made in Hawai‘i and that provides us with a strong link to the past.”

Caring for Your Feather Lei and Hatbands

Feather lei and hatbands are delicate works of art that should be treated with great care and respect. Paulette Kahalepuna offers these tips:
•    When you’re not wearing your lei and hatbands, coil and wrap them in acid-free tissue paper, then place them in a round, airtight, previously unused plastic or metal container.
•    Store the container in a cool, dark place.
•    Air out your lei and hatbands for at least a day several times each year.
•    Moisture can damage feather work, so be sure you keep your treasures away from open windows, the bathroom, sinks and other areas of your home where water may accumulate.
•    Don’t wash or leave lei and hatbands in direct sunlight. Doing so can fade the colors of dyed feathers and warp the felt on the hatband.
•    If you plan on keeping a hatband on a hat for a while, dust it periodically so bugs don’t settle in it.

Learning the Craft on Maui

Pattie Hanna grew up in rural Keokea in Upcountry Maui, where a feather hatband was a sign of status. “You’d see twelve paniolo, and one would be wearing a hat with a hatband,” she says. “He would immediately stand out from the rest because you knew he either was a good enough hunter to get enough feathers needed for hatbands, or he had enough money to commission them, or he had a family member who sewed lei.”

When she was a teenager, Hanna’s two stepbrothers spent their spare time hunting ring-neck pheasant, francolin and chukar. “Back then, in the late seventies and early eighties, hunters would give their pelts to a lei maker and she would make hatbands for them,” Hanna recalls. “We had hundreds of bird pelts at home, and my stepbrothers kept telling me, ‘You can do that.’”

So Hanna visited Keokea’s lei makers. “I learned by observing. One lady would sew in her little general store, another would sew during recess at the grade school where she worked.”

Thirty years later, Hanna still lives Upcountry, amid hundreds of pelts and hatbands, and is herself a respected teacher of the art.

Hanna met Paulette Kahalepuna three years ago at a class arranged by Kaunoa Senior Services. “Paulette talked to us about the history of feather work; the capes, kahili and other traditional things; and the importance of documenting your arts lineage—who you learned from, who that person learned from and so on,” she says.

In the eight years that she’s been teaching, Hanna has met people of all ages, from all walks of life. Her classes always draw a few men whose work, she says, rivals women’s in quality and creativity. The craftsmanship of some of her students is so fine, she believes they will be regarded as feather-work masters in the future. An exhibit of hatbands by Hanna and her students, titled “In Tribute to the Lei Makers of Keokea,” is on view through December at Kahului Airport.

Hanna’s classes are held at Kaunoa Senior Services, 401 Alakapa Place in Spreckelsville, and Maui Community College (MCC), 310 West Ka‘ahumanu Avenue in Kahului. Fees, days and times vary, and students at Kaunoa must be at least fifty-five years old. Call Kaunoa at 270-7308 and MCC at 984-3231 for more information.