They say a sequel never quite measures up to the original, but that’s not the case with the Maui Film Festival, which seems to outdo itself year after year.

This time around, a diverse lineup of films, chosen from nearly one thousand submissions, will light up the big screen, including two documentaries with Maui connections: Supermensch: The Legend of Shep Gordon and Dying to Know.

Supermensch chronicles the fast-lane life of entertainment-industry maverick Shep Gordon. The biopic also marks the directorial debut of actor Mike Myers, who grew close to Gordon (whom he considers “a perfect combination of Brian Epstein, Marshall McLuhan and Mr. Magoo”) while staying at Shep’s home in Wailea more than twenty years ago. 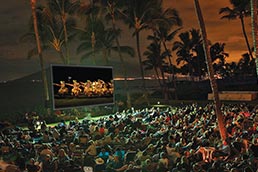 This year, besides the Celestial Cinema, the Maui Film Festival will treat movie buffs to an oceanfront viewing experience and an extra dose of star power at the Seaside Cinema Music Cafe & Sunset Lounge, located on the Grand Wailea Resort’s Chapel Lawn. The twenty-one-and-over Seaside Cinema will host “Intimate Conversations” with this year’s festival honorees and luminaries, who will take center stage for moderated Q&A discussions. The starlit venue will also feature refreshments and a no-host bar — and there’s no need to bring your own chair.

The festival runs from June 4 through 8 (a week ahead of its usual schedule) at Wailea Resort and the Maui Arts & Cultural Center’s Castle Theater.

Special-event and multilevel VIP passes are available at mauifilmfestival.com, where you’ll also find updates on screenings and other events, as well as ticket information and venue specifics.