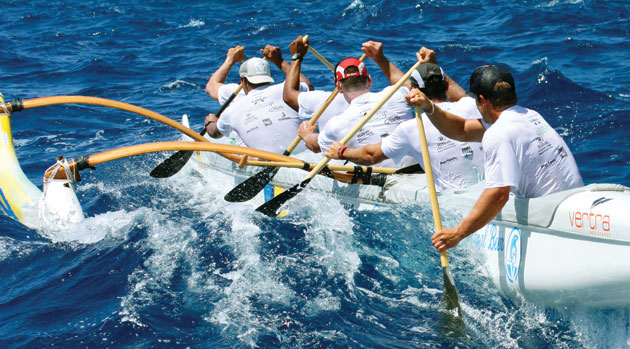 On October 11, a Maui crew became the first Hawai‘i team to finish the 2009 Moloka‘i Hoe, placing second in this world-championship outrigger-canoe race—unprecedented feats for a Neighbor Island crew.

Team Primo finished in four hours, fifty-two minutes, twenty-four seconds—twelve minutes and about a mile and a half behind Shell Va‘a of Tahiti, which earned its fourth victory in as many years. The record field of 112 crews hailed from all the major Hawaiian Islands and from Australia, New Zealand, California and the Pacific Northwest.

The granddaddy of Hawaiian canoe races, the Moloka‘i Hoe stretches more than forty miles from Moloka‘i to O‘ahu. Nine-man teams compete in six-man canoes, with two to six crew members making water changes every twenty minutes or so, all while traversing the unpredictable, often treacherous Kaiwi Channel.

Challenges include wind, waves, currents,  and ailments such as seasickness and sunstroke—and that’s after the canoes hit the water. Each team has to first undergo cardiovascular conditioning; obtain a canoe, paddles, and escort boat; deal with the logistics of shipping the canoe, travel and lodging; and most importantly, achieve team unity.

No Neighbor Island team has come this close to winning, because most isle crews represent a single club. But Team Primo was a select crew with a core of dominant Maui paddlers: Kai Bartlett, Mael Carey, Felipe Gomes, Peter Konohia, Tyson Kubo and steersman Kekoa Cramer; plus all-stars Mike Judd and Mike Pedersen of O‘ahu and Danny Ching of California.

“We’re proud because six of us were from here. It puts Maui on the map,” Bartlett said. Kubo added that vying against the professional Shell Va‘a crew was like “a backyard softball squad facing a Major League baseball team.”