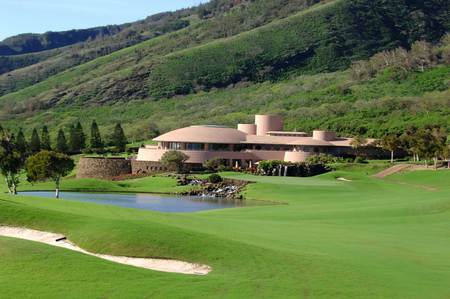 Memberships were rumored to cost $250,000 when the Grand Waikapu Golf and Spa Resort debuted its $35 million, Frank Lloyd Wright-designed clubhouse in 1993.

Seven years later the course was shut down, the sprinklers were turned off and the eighteen-hole course’s landscaping was left to fend for itself. Not one membership was ever sold. The bottom had fallen out of Japan’s economy in 1990 and Hawai‘i was no longer a playground for the wealthy clientele the course was built to serve.

To go private, or not to go private, that is the question island golf course owners have been pondering ever since, especially of late, as they navigate their companies through rapidly changing times for island real estate and the sport of golf itself.

Grand Waikapu’s woes highlight some of the dangers. The course’s reemergence in 2006 as the King Kamehameha Golf Club also offers hope for optimism. There are currently 150 members at the club. Memberships sell for $60,000, with an additional $6,000 in annual dues. Slots are open for about 250 more people to join the club.

Maui Country Club in Spreckelsville, where full family memberships are $5,000 and dues are $140 a month, is the only other private course on the island. Persistent rumors have been swirling, however, that other Maui courses may turn private. Or may not.

The official word is: the Wailea Old Blue Course is not turning private, but the owners may reexplore that option in the future. Kapalua’s plan to develop the closed Village Course into a new eighteen-hole layout called the Mauka Course is on hold . . . for now. One of Makena’s two courses may turn private, but the owners are waiting to see what they decide to do with the property’s hotel, the Maui Prince. If the hotel remains open, both courses will be kept public. For now, Makena will be reserving three hours every Wednesday for owners in the resort.

The future eighteen-hole golf course planned for Honoua’ula (Wailea 670) homeowners was still in the hands of the Maui County Council at press time. Developer Charlie Jencks says the 7,000-yard layout designed by professional golfer Tom Weiskoph is an integral part of the project’s land-use plan.  The course covers 200 acres of the 300 designated as open space in the 670-acre development. Winding through neighborhoods, it would be located uphill from Wailea’s Diamond Resort and the Wailea Old Blue. Homeowners in the development would be eligible to purchase memberships, while public play for Maui residents will be offered one day a week. A Maui Jr. Golf program and quarterly play for non-profits is also planned.

Community perceptions often swing to the negative when there is talk about building private clubs, or turning public courses private. Maui residents are accustomed to playing any island course they want, and often at a reduced rate. This easy access to elite courses is not found in many other communities around the golfing world.

Course operators say turning private is not about excluding everyday golfers, it is about surviving as a business. Currently the number of rounds played each week on Maui are down, as they are nationwide. Courses are hard-pressed to turn a profit.

“We have a lot of golf courses on Maui,” says Everett Dowling, whose development company recently bought Makena Resort and its two courses. “As an industry, the rounds are decreasing and I think there is surplus capacity. If you and I wanted to play today, we could probably get tee times at every course on the island.

“That being the case, from a cash-flow standpoint, you can’t perform that well. It’s ‘how do you make use of the assets and keep the jobs?’”

Tying golf memberships to real-estate sales—buying a property in a development and becoming a member of the club—is one way for developers to fund their golf course budgets. When courses face extensive renovations, as older courses often do, the sale of memberships is another way to foot that hefty bill.

“Golf courses, in terms of being able to support themselves, are not very good investments,” Dowling says. “Basically they are amenities, very expensive amenities.”
Real estate’s slowdown and the Maui community’s increasing call to halt growth until the infrastructure catches up complicate matters for developers. Wide swaths of green fairways in the middle of South Maui deserts become easy targets when islanders are asked to conserve water in a dwindling supply.

Fresh from a seminar on how courses can help combat global warming, Dowling says that golf courses get a bad rap. The Makena and Wailea courses have their own wells and use brackish water to irrigate. Makena also mixes in treated water from its sewage treatment plant. Dowling says using effluent to irrigate is a better way to dispose of treated water than the injection wells that are used in other parts of the island.

“I think golf courses got a bad rap back in the seventies because they were using so many pesticides. In the past two decades things have changed; there are new techniques and strains of grass that are hardier.”

A hardy attitude is what the staff at Wailea Old Blue needed in the early part of 2006 when the island golf community quit coming because it assumed the course had gone private. “The start of year was dismal, because people thought we were private,” says Old Blue General Manager Barry Helle. “We basically took a look at it and the way the market is, and with the possibility of other private courses near us . . . we are going to stay public.

“But we do believe there is a market for a private membership club in South Maui. With the demographics of the residents and the fact that we have so many frequent return visitors, we do have a market for it.”

“What the public needs to know is there is always room on the Old Wailea Blue. We’ve appreciated local player support through the years, and as we move forward we will always consider them important as our customers.”

The Blue Course’s first nine holes were built before there were any hotels or condos in Wailea. To get there, you had to cross a cattle guard and bounce along a “beat-up dirt road.” When you consider the thriving, growing resort destination that Wailea has since become, the importance of great weather and activity amenities like golf cannot be discounted.

But on the other side of the coin is little Maui Country Club, where you might find retired Supreme Court judges playing alongside rock-and-roll stars, and local guys raised in sugar plantation camps.

“It’s probably one of the last true country clubs,” says Director of Golf Bruce Woelke. “It’s a neat mix, where you can have fun together and play golf.” Golfers can hear the ocean, but not see it, on the flat nine-hole layout between Kahului Airport and Pa‘ia. The oldest course still operating on the island, it has 800 members who enjoy the greens, tennis courts, a pool and a quaint cinder-block clubhouse.

“We’re a little hidden gem here,” Woelke said. “It’s like you are back [on Maui] in the seventies. Kids can go to the beach while parents play a round of golf. We don’t have all the amenities, but with amenities comes paying. [The members] like it inexpensive and unpretentious. That’s what keeps the charm.”

Amenities and services are being extended at the King Kamehameha Golf Club as new members join. “It’s come a long way, but it has a long way to go,” says Director of Golf Operations and Memberships Rick Castillo. “We’re not a country club, we’re a golf club. We try to stay away from the word ‘private’ because we are not private. Anyone can become a member.”

Anyone, that is, with $60,000 burning a hole in his pocket. While many Maui residents would find that sum above their means, Castillo points out there are others who find the price extremely attractive.

“The course is located 700 feet above sea level and our driveway dead ends at the parking lot,” Castillo says. “We’re all by ourselves up here and it’s quite tranquil. There are no homes around the course, no condos.” Members are entitled to unlimited golf with no daily fees, and complete access to club facilities with full service.
Meanwhile, Kapalua officials have delayed plans to build their Mauka Course. Construction will begin only when market conditions improve.

“The Mauka Course and clubhouse remain central to our plans for Kapalua
Resort,” says Teri Freitas Gorman, vice president of corporate communications. “In fact, the private course is critical to developing over sixty premium properties within the 925 acres of Kapalua Mauka.

“That said, we’re aware of unstable market conditions on the horizon, and decided to postpone groundbreaking for the Mauka Course until it makes more sense.

“Golf remains an important focus of Kapalua Resort,” she adds. “The Plantation Course, home of the Mercedes-Benz Championship, has long set the standard for Hawai‘i golf. The Bay Course has just undergone substantial renovation in preparation for the inaugural Kapalua LPGA Classic. So despite having to wait for the Mauka, golfers can expect the same premium golf for which Kapalua Resort is famous.”