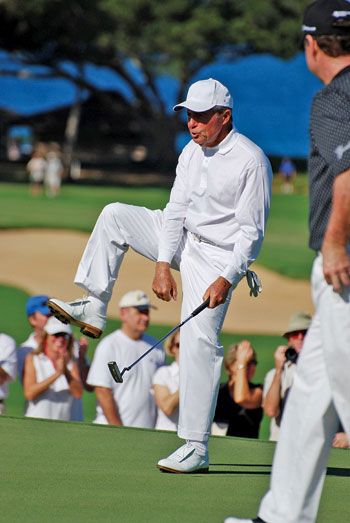 Maui’s golf courses have long delivered a sublime eighteen-hole experience: exhilarating challenges tucked within distractingly beautiful landscapes. Isle tournaments attract some of the biggest and best names in professional golf—and opportunities for the rest of us to play great courses for a worthy cause.

Seoul Broadcasting Systems takes over as sponsor of the former Mercedes-Benz Championship. Limited to winners from the 2009 PGA TOUR season, this signature event will have players vying for the first PGA title of 2010—and a $5.6 million purse. Qualifiers as of press time include Steve Stricker, Y.E. Yang, Retief Goosen, Rory Sabbatini, and defending champion Geoff Ogilvy. Nationally televised with live prime-time coverage on the Golf Channel, the SBS Championship kicks off January 4 and 5 with professional practice rounds and a January 6 pro-am. Since 1999, the Championship has donated more than $3.2 million to the Maui community. This year’s beneficiaries include the Boy Scouts of America, Maui County Council; Maui Memorial Medical Center Foundation; Hale Makua; Lahainaluna High School Foundation; and Ka Lima o Maui. Tournament information: 665-9160; www.kapalua.com. Tickets: Toll free (877) 772-5425

Ben Crenshaw and Fuzzy Zoeller return to defend their 2009 title against 2007 champs Jack Nicklaus and Tom Watson, and four other golf legends in an alternate-shot, two-man-team format that will be televised by ESPN on a tape-delayed basis. Gary Player will pair with Loren Roberts as they did in 2008, while Fred Couples and Nick Price make their Wendy’s Champions Skins Game debut. This will be Couples’s first Champions Tour appearance. Events are free and open to the public (including a pro-am on January 15), and benefit Maui Junior Golf. Tournament information: 661-3271; www.Kaanapaliresort.com

Golfers squaring up for the shotgun start at this annual event can take pride in knowing they’re benefiting Ka Lima O Maui, a nonprofit organization that trains adults with developmental disabilities. Lunch and an awards ceremony follow. Tournament Information: 244-5502; www.kalimaomaui.org

This fundraiser is named in honor of the Maui philanthropist who spearheaded the creation of the Maui Arts & Cultural Center. In 2009, more than 160 golfers participated, raising $34,000 for the MACC’s arts-education programs. Registration & sponsorship information: 243-4225; www.mauiarts.org

Some two-dozen golfers compete in an event unique in its format—with a par of 399. Having raised pledges on behalf of Ka Lima O Maui, players try to complete 100 holes between sunrise and sunset. The Wailea Golf Club has supported this nonprofit event for more than two decades. Tournament information: 244-5502; www.kalimaomaui.org

Maui golf professionals join amateur players in the twenty-fourth annual Kapalua Clambake Pro-Am, which this year benefits Maui Special Olympics, Lahainaluna Golf Team and the Hawai‘i State Junior Golf Association. Teams of four will compete for tournament honors dished out at the popular clambake that follows. Award ceremonies, along with the clams, are held beachside at the Ritz-Carlton, Kapalua. Tournament information: 665-9298; www.kapalua.com

Part II: For tournaments scheduled in the second half of 2010, watch for the Maui Golf Guide in our July/August issue.

Pop-up private dinners are a hit.