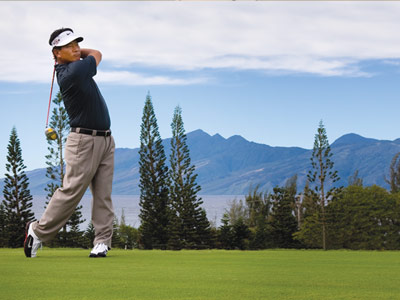 If there’s one thing the 2012 Hyundai Tournament of Champions has on its side, it’s youth. The PGA Tour’s season-opening event, happening January 5 to 9 at Kapalua’s Plantation Course, welcomes some of the freshest faces in golf. On this year’s card is the 2011 PGA Rookie of the Year, twenty-five-year-old Keegan Bradley, who won twice last season, earning four top-ten finishes. Also teeing off—and also in contention for Player of the Year—is Webb Simpson, twenty-six, who collected two wins and a spot on the 2011 Presidents Cup team.

“You’ve got a lot of young, new faces that are going to be good for the game in the long run,” says Mike Jones, director of golf operations at Kapalua.

They’re good already. The tournament is an exclusive invitational for winners from the previous PGA Tour season. “It’s small and exclusive, around thirty-five players,” says Tournament Director Nancy Cross. “Everyone who’s playing is a champion.”

The 2011 Hyundai Tournament featured some of golf’s most decorated players, including Geoff Ogilvy, Ernie Els and Jim Furyk. With a $1.2 million winner’s purse on the line—not to mention bragging rights as best of the best—the young guns will have to outplay veterans such as last year’s champion, Jonathan Byrd; and K.J. Choi, who set the course record of 62 in 2003, when it was known as the Mercedes-Benz Championship.

But the toughest competition may just come from the course itself.

Designed by Ben Crenshaw and Bill Coore, the Plantation Course is a par 73, 7,411-yard test that has been known to humble even the sharpest shooters. The good news: its broad fairways and spacious greens help compensate for Kapalua’s notoriously tricky trade winds.

The course showcases Maui at its finest, snaking through 240 acres of undulating terrain. With Pacific views at every hole, you might even spot Maui’s humpback whales cavorting offshore.

The tournament also offers a Fan Zone with interactive expos, swing analysis and a putting green. But for aficionados, the real treat is getting to see the sport’s top athletes up close. Cross says that Kapalua offers one of the few PGA Tour events where spectators can enjoy front-row access to their favorite players—and see them at their best.

“It’s the season-opening event,” she says. “The pros are rested from their Christmas breaks and they love coming to Hawai‘i. Many of them bring their families, and are relaxed and just having a good time.”

Play begins with a January 5 Pro-Am and continues with four rounds of professional competition January 6 to 9. Admission is free for the Pro-Am. Tickets are $20 at the gate for all other days. For details, call 665-9160 or visit www.kapalua.com.