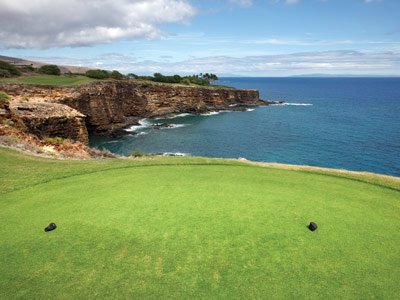 When it comes to golf, Lanai gives you two unbeatable choices: mauka (inland) and makai (ocean).

For the former, imagine swinging beneath towering pines on a layout that winds through naturally carved canyons. The Experience at Koele invites golfers to embrace the course as a mountain playground.

Alternatively, whip out the SPF 50 and head seaward, where salty breezes and postcard-worthy views are guaranteed from every tee at The Challenge at Manele.

These sister courses are decidedly distinctive, and equally enticing. In which case, choosing just one might not be enough. Happily, you don’t have to choose.

Here’s what to expect.

The Challenge at Manele

The crashing surf along Hulopoe Bay taunts golfers from tee Nos. 12 and 17, where the only way across is over open ocean. Miss the green, and you’ve just made a donation to the golf-ball graveyard 150 feet below.

It’s a layout that plays with your head. Not to worry, says Markulis; many sections simply look scary.

“From the tee boxes, the fairways appear narrower than they really are,” he says. Nicklaus “did a good job at creating some optical illusions and making the course look more difficult than it is.”

In fact, the course is as tough as golfers choose. Each hole offers a choice of five tee boxes, and distances of anywhere from 5,024 to 7,039 yards.

Serious golfers aren’t the only ones attracted to The Challenge’s signature 12th hole. “All kinds of people get married here,” says Markulis. And then there are the merely curious, who flock here to see the spot where Bill and Melinda Gates were married in 1994.

The Experience at Koele

Trade those short sleeves for something a bit cozier as you head eight miles inland for a complete change of pace. While The Challenge features generous fairways and panoramic views, The Experience is intimately sheltered by ravines wooded with pine, koa and eucalyptus trees.

Perched 2,000 feet above sea level, the layout features sweeping elevation changes — none more dramatic than the signature 17th hole, a 390-yard par 4 that plunges 200 feet to the fairway. It’s like teeing off from a twenty-story building to slot the ball between the slopes of a chiseled canyon, just to reach a fairway lined with monster trees.

“A lot of people say it’s the best hole they’ve ever played,” says Doug Duguay, assistant golf professional at The Experience. “If people remember one thing about this course, it’s No. 17.”

Designed by Greg Norman and Ted Robinson, The Experience is one of only two courses in Hawaii that feature bent-grass greens, a rarity in the Islands because of its preference for cooler weather.

“You just don’t expect to see bent grass in a place like Hawaii, but people love it because the roll is true,” Duguay explains.

Another draw is the contrast between the front and back nines, making The Experience feel like two courses in one. The first nine holes cut through old pineapple fields; the last nine roll through the highlands of the former Koele Ranch.

Like its sister course, The Experience welcomes all levels of skill, with five sets of tees ranging from 5,425 to 7,014 yards.

At just 141 square miles, Lanai may be a relatively small island, but it makes up for that with ample opportunity for club-toting visitors. A forty-five-minute ferry ride from Maui’s Lahaina Harbor (or a twenty-five-minute flight from Honolulu) is all it takes to arrive at this golf-inspired Shangri-La.

This off-the-beaten-path locale promises sparser crowds, ensuring ample time to sample both courses well before sundown. But why rush a good thing? The Four Seasons Resort at Manele and Four Seasons’ Lodge at Koele offer guest discounts and a day of unlimited play at both courses for the price of one round. And the two hotels offer accommodations as exceptional and distinctive as the courses themselves.