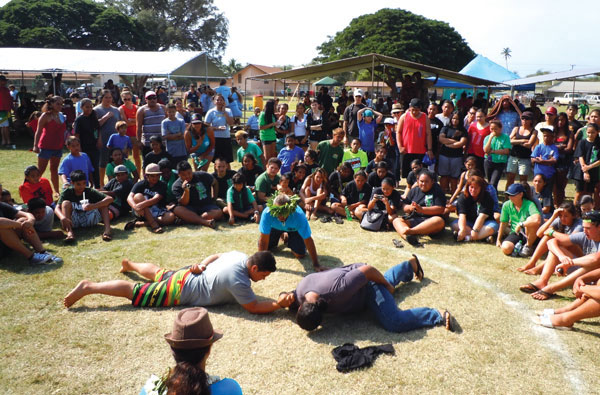 Toes dig into the grass and smiles turn to grimaces as keiki (children) lean back on their heels, gripping the rope and tugging against their rivals. The crowd creeps closer, roaring encouragement. The young athletes take short, staggered steps backward as they inch the ti leaf tied in the middle of the rope toward the victory line. With a final heave, the winning team topples to the ground, grinning and pumping fists.

This is hukihuki, Hawaiian tug-of-war, one of the athletic events at Moloka‘i’s annual Ka Moloka‘i Makahiki. The Makahiki games are an ancient tradition honoring Lono, the Hawaiian god of peace and agriculture. The season of Makahiki lasts four months — usually November through February — and in the ancient days, war was kapu, or forbidden, during this time. The people made offerings from the harvest to Lono, and everyone joined in athletic games.

With Christianity’s arrival in the Islands, the practice of Makahiki began to die out by the late 1800s. For more than half a century, the tradition lapsed — but was not forgotten. In 1981, a group of Moloka‘i cultural practitioners brought Makahiki to life again, and the games have been held here annually ever since. Competitors begin training months in advance, hoping to win for their district in feats of athleticism such as ‘ulu maika (Hawaiian bowling), haka moa (standing chicken fight), uma (arm wrestling), ‘o‘o ihe (spear throwing), kukini (running) and hukihuki.

Friday night features adult competitions. Saturday is for youth — and while Makahiki is now celebrated on almost every island, many schools around the state bring their students to Moloka‘i, where, they say, they feel more connected to the festival’s cultural traditions and meaning.

“We participate in Makahiki to represent our culture,” says Kallee, an elementary student from Kamehameha Schools Maui. “These games were played by our ancestors so we want to carry on the tradition.”

“We learn good sportsmanship and helping each other as ‘ohana [family],” says a Moloka‘i student.

Cultural practitioner Miki‘ala Pescaia agrees. “No other event in Hawai‘i allows keiki from so many different places to come together with so much aloha and respect for one another,” she says.

Ka Moloka‘i Makahiki is primarily intended as a cultural practice for its participants, but if you’re on the island on Saturday, January 25, you’re welcome to come watch the youth competitions, beginning around 7:30 a.m. at the Kaunakakai Ball Park.