If you’ve ever wanted to play a round at Maui’s premier private eighteen-hole golf club, the King Kamehameha Golf Club’s new “Member for a Day” program is your ticket. For $180, you can golf beautifully tended, mountainside fairways that have practically been reborn, and have lunch at a clubhouse designed by Frank Lloyd Wright.

It’s rare for a private club like the King Kamehameha to make its course so available to the public. Even nongolfers can visit the clubhouse and view a distinctive Hawaiian-themed art collection that includes a mural by renowned Hawaiian artist Herb Kane, sculptures by Maui artist Dale Zarella, kapa (tapa) by Puanani Van Dorpe, and a feather cape by Joanne Kahanamoku-Sterling—both women Living Treasures of Hawai‘i.

And if those lovely fairways and panoramic views prove addictive, well, there’s always the adjacent—and public—Kahili Golf Course, whose great low rates make it, in Castillo’s words, the “best golf value on Maui.”

The Dunes at Maui Lani

As its name implies, the Dunes at Maui Lani is a course literally built on sand. It’s also located in the heart of Maui’s populous Central Valley, where being a responsible neighbor means respecting the drainage requirements of the nearby community. That was the impetus for renovations the Dunes has made over the past two years to increase the course’s capacity to catch storm-water runoff.

The new basin on the right side of the sixteenth hole’s fairway doubles as a water hazard, with seven strategically placed bunkers on the left that up the ante for those who think they can drive the green. Meanwhile, a new green complex has been designed to accommodate more pin placements and a better putting surface.

The par five fourth hole, which opened in December, boasts a new line of sight from tee to green, new fairway bunkers, a relocated putting green, and a drainage basin on the right—which not only improves Maui Lani’s storm-water-holding capacity, but impels golfers to keep accuracy foremost in minds. All the improvements aesthetically blend with the course’s natural layout, unique sand base, and British “linksland” feel, while rewarding players’ golf-management skills more than ever before.

Blessed with natural beauty and carefully cultivated fame, Kapalua’s Bay and Plantation Courses—which have hosted world-renowned tournaments like the Kapalua LPGA Classic, the Mercedes-Benz and SBS Championships—wouldn’t seem to require much improvement.

But an ambitious rejuvenation of the scenic Bay Course has restored and expanded all the tees and bunkers. The putting and practice greens have been rebuilt and surfaced with TifEagle, and there’s now a “short game area” where guests can hone their chip shots, putts and bunker work. There’s also a new three-hole Village Walking Course for casual play.

And the Plantation Course, site of numerous PGA TOUR events, has seen a recontouring of all the greens and a restoration of all bunkers, with the goal of further improving playability for all comers, duffers to pros. Renovations include leveled tees and new hole locations for resort and tournament play. It’s an almost invisible upgrade—but one that can be felt in the kind of world-class golfing experience that, as Tournament Chairman Gary Planos promises, “will help complement two tournament-tested golf courses, and keep our internationally televised events on course for a bright future.”

Club technology has changed since Robert Trent Jones Sr. designed the Royal Ka‘anapali Course in 1962. Robin Nelson has repositioned the bunkers to account for clubs that today allow farther drives off the tee. He’s also increased the strategic challenges of the Arthur Jack Snyder-designed Ka‘anapali Kai Course, adding bunkers that frame the hole while making an approach shot more difficult from the wrong side of the fairway off the tee.

Adding a fourth set of tee boxes means juniors and casual golfers can play from a more manageable distance—4,500 yards for the Kai, 5,400 for the Royal.

“Since the renovations,” says Kageyama, “the courses are visually more interesting to play, blending a contemporary look with a classic design.” 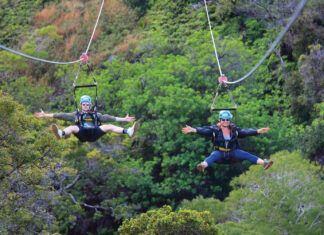