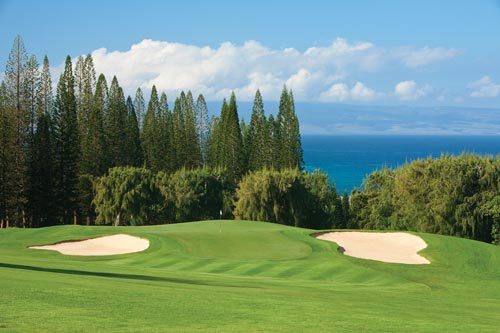 These days, dedicated golfers might be forgiven for doubting the old maxim “Change is good.” One of the sport’s biggest cats may be headed for early retirement, and the irregularly dimpled Polara golf ball threatens to take the word “slice” out of the golfer’s vocabulary and alter the traditional dynamics of the game.

But some change any golfer can welcome, particularly when it improves Kapalua Resort’s classic Bay Course. Not that there’s any need for drastic transformation at a course that boasts, among other features, a spectacular fifth hole where golfers have a chance to blast their tee shot 100 yards over an inlet of billowing surf at Honolua Bay.

Still, as Mike Jones, director of golf operations at Kapalua, told me, “Over the last three years we’ve always had small construction projects going on, and now it’s done. The Bay Course is basically new; we’ve redone the greens, tees and bunkering, and we hope people will come back and play it again.”

Designed by Arnold Palmer and Frank Duane, the 6,600-yard, par-72 course opened in 1975, and its gently rolling terrain and dazzling coastal views quickly made it an international favorite. Soon it was drawing numerous PGA and LPGA Tour stars and hosting events like the Lincoln-Mercury Tournaments—until that became the Mercedes Championship (now Hyundai Tournament of Champions) and moved in 1999 to the Bay’s sister course, the Plantation.

Jones likes to call the Bay “Hawai‘i’s favorite resort course . . . it’s challenging but friendly, doesn’t beat you up and is more fun.” The topography hasn’t changed, Jones says, and quips, “Arnold would still recognize it.” Golfers will still have that glorious march to the sea on hole four—whose dogleg left borders the bay, making the trade winds a factor in any shot—and the stunning ocean vistas and treacherous bunkers of hole five. They’ll still face a back nine with a clever mix of bunkers, ravines and water hazards, climaxing with a 16th hole that puts a golfer’s strategy to the test with a pond and a split fairway.

The main change is something of a facelift. The undulating greens, long known as fairly fast, have been resurfaced with TifEagle Bermuda grass developed exclusively for golf greens. That translates into a slightly slower upward putting surface and an even faster downslope one, with a tendency for the shot to break towards the left. For more serious golfers, that might be worth a trip to the Bay’s new “short-game area” to practice their chip shots and putting technique. For those of us who tend to be better view-lovers than players, it’s a lush, gorgeous new look.

Renovation has restored the greens to their original size, to counter the “creep in” of mowing patterns and growth that occurs on the circumference of any course over time. The tee boxes have been expanded and laser-leveled—as in checked with laser beams—so there’s little excuse if a golfer doesn’t have his feet in proper relation to the ball. Most holes now have four sets of tee boxes to accommodate every level of play, from junior tees on the front nine holes, through resort, regular and championship level. And to add to the family fun or more casual golf experience, there’s a three-hole Village Walking Course.

Troon Golf Management, a company that currently manages more than 200 courses in Asia, Europe and the Middle East, took over the Bay and Plantation Courses in April 2011, and has bolstered the services at Kapalua Golf. “We’re going in the opposite direction of a lot of courses,” says Jones, “adding fifteen staff members to better take care of our customers, even with the economy struggling.” And what he calls Troon’s well-known “agronomy and conditioning standards” are in harmony with Kapalua Golf’s reputation for ecological awareness; for example, a drainage filtration system separates all oil, gas and chemicals from any runoff from heavy rains before it reaches the ocean. Players can be confident that the Bay is still meeting the standards that earned the course its Audubon Cooperative Sanctuary certification.

With its enduringly beautiful design and spanking new greens, the rejuvenated Bay Course is ready for its next generation of brilliant players, as well as those for whom the top of their game translates to simply golfing under Maui skies.

Email golf@kapalua.com for current and upcoming specials and golf rates.