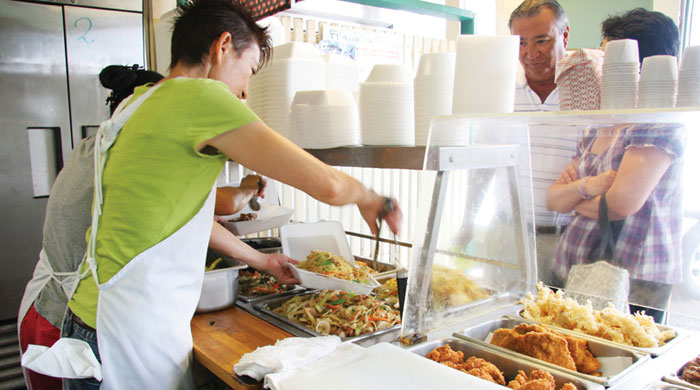 The scent of fresh ginger, steaming rice, and sizzling sesame oil wafts through the frayed screen doors, drawing a steady line of customers into the one-room eatery. Ichiban Okazuya’s humble storefront on Kaohu Street belies the quality—and quantity—of food prepared within. Ichiban, which means number one, the best (no ka ‘oi, if you will) is a fitting name for this popular Central Valley kitchen. But okazuya? What the heck is that?

According to Donovan Dela Cruz and Jodi Chai, authors of The Okazu Guide: Oh, ‘Cause You Hungry!, okazuya is a Japanese word for a Hawaiian tradition. Back in plantation days, deli-style eateries popped up to serve immigrant bachelors who needed portable lunches for long days in the fields. Before punching the clock, the fieldworkers would stop at a small storefront, or ya, where they could grab okazu (side dishes served with rice) on the go.

In the past, okazuya were sprinkled among the various plantation camps. Nowadays, the few that remain are found in strip malls or down city side streets, and are frequented by construction workers, county officials, and those looking for affordable food to go. Maui doesn’t have the tantalizing array of okazuya that O‘ahu has—those hidden gems featured in Chai and Cruz’s book—but we’ve got a few tucked-away treasures of our own. The best of the bunch, in our opinion, is Ichiban Okazuya.

When Ichiban’s doors open at 10 a.m., the trays behind the counter are piled high with chicken katsu pieces, sweet-potato tempura, lightly steamed broccoli, fish cake and noodles. Traditional okazuya food is prepared ahead of time and displayed so that customers can point and pick, creating their meals cafeteria-style. Most dishes are dry, making them easy to carry, and might hail from any one of Hawai‘i’s many ethnic groups.

At Ichiban, what isn’t prepared beforehand takes five minutes to cook, says owner Tony Sasaki. That’s a good thing, because with just four parking stalls and no seating, it would be otherwise impossible to satisfy the 300 customers he serves daily.

Sasaki moved here from Japan, where his family was also in the restaurant business. After honing his hospitality skills in the kitchens of the Intercontinental (now the Renaissance Wailea) and the Sheraton Ka‘anapali, he struck out on his own, opening shop in the shadow of the County Building twenty-seven years ago. His okazuya quickly became known for its mouthwatering chicken katsu, which some say is the best on the island. The thin golden strips of deep-fried chicken are perfectly crunchy on the outside and moist on the inside.

Ichiban’s main cook, Chieko Sasaki (no relation to Tony), is the culinary mastermind behind the restaurant’s top-selling recipes. The slender, spiky-haired chef also relocated from Japan three decades ago, and creates recipes from memory. She’s responsible for the fresh kim chee (a steal at fifty cents a tub) and the gobo (burdock root)  vegetable dish—a nutritious  specialty that never fails to sell out.

This brings up an important element of okazuya dining: timing. Ichiban, like most okazuya, has limited hours and often runs out of the most popular items. The food is made fresh every morning, and the cooks don’t want any leftovers. So if you’re hankering for a specialty item—like the chicken katsu—get there while the trays are still full and steaming hot.

Business at Ichiban Okazuya is brisk from ten until two, when the kitchen closes, and then again from four to seven.

Sasaki’s experience in the resort kitchens instilled in him a commitment to premium service. While the kitchen’s environs are spare, many of the dishes are labor intensive, and all feature high-quality ingredients. The cooks arrive at five a.m. to start prepping. Slim stalks of burdock must be peeled, seaweeds soaked, and never-ending pots of rice set to steam.

Nishime, a savory Japanese vegetable stew, simmers in a big pot behind the counter. Chock full of potatoes, turnips, carrots, bamboo shoots, and kombu seaweed, it’s nourishing and filling—Asian comfort food. It’s not on the menu; you have to ask for it.

If you see a tray brimming with something unfamiliar, don’t be shy. Ask. Sasaki’s wife, Nami, cracks jokes at the cash register, greeting regulars with a big smile. She’ll point you in the direction of a special dish worth trying. And then she’ll talk you into adding a piece of shrimp tempura or two to your order.

Straying from tradition, the chefs at Ichiban Okazuya will cook to order. A menu to the right of the entrance advertises pan-fried ‘ahi, teriyaki salmon, and misoyaki butterfish. The five chefs move among stove, counter, cutting table, mounds of produce—and one another—with a fluid intuition that approaches choreography.

One of the kitchen’s specialties, hijiki seaweed, is a highly nutritious dish you won’t find on many menus. The earthy, black flecks of seaweed are served warm, mixed with shiitake mushrooms and carrots. The lightly fried tofu balls are heavenly—sweet, soft, and full of flavor.

Sasaki says food should be good for the health and the pocketbook. His plate lunches are distinctly different from those at other local-style eateries that load plates with carbohydrates and mayonnaise.

“Mac salad, coleslaw,” he says, making a face. “I cannot handle that. Too much calories!

“The Japanese food concept is long life. Not everybody puts shredded cabbage on the plate. I do. It’s healthy for digestion.”

The kitchen’s approach to cooking is perhaps counterintuitive: an easy hand with the spices. “We always try to make weak taste, less seasoning,” Sasaki says. “People can fix it how they like.” Without heavy sauces to obscure their flavor, the fresh vegetables shine. And if you can’t live without the heat, the big bottle of bright red chili sauce beside the cash register will do you right.

“Because the kitchen is open, the communication is very easy,” says Sasaki. “Not like at a restaurant, where you have to wait until a waitress comes over.” The kitchen veteran prides himself on knowing what customers want before they reach the counter.

“You like pan-fried fish,” he says to me. (He’s right.) “Just a hunch after working twenty-seven years.”