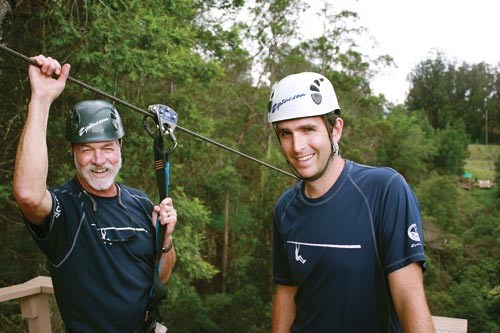 Take the zing of a pulley that’s running wind-swift along a stainless-steel cable. Add to that the yahooing or squeals or gleeful shrieks of people releasing their inner Tarzan. Such are the happy sounds of a zipline crossing. These days the crew of Skyline Eco-Adventures gets to enjoy that music on average once every thirteen seconds. It’s a remarkable success rate for a company launched just eight years ago by a kid with an idea most people had never heard of.

“We were extremely fortunate that Haleakala Ranch was willing to give us a chance,” says Danny Boren, recalling the negotiations that allowed him to stretch his first zipline on leased forest slopes. “I was twenty-three years old. My biggest work experience to that point was being stock boy at Woolworth’s. And I was planning to do something that had never been done before in the U.S.”—something that sounded suspiciously like pushing people off cliffs.

Truth is, Danny brought a lot more to the deal than his history at Woolworth’s. He had a crisp new college diploma in the field of entrepreneurship, an excellent business plan, and a stalwart partner—his father, Buck. (Though Buck remains co-owner and creative adviser of Skyline, he now leaves the day-to-day matters to Danny.)

“I always knew that I wanted to own my own business,” says Danny. “And, growing up on Maui, I wanted to be outside as much as possible.”

After graduating from Seabury Hall in Makawao during the mid-nineties, he spent two years as a student at University of Utah. “I was there mostly to snowboard, to tell you the truth.” But a broken ankle and a dislocated hip caused him to rethink his priorities. He finished his degree at Northeastern University, Boston. Then he went surfing.

“My dad always said that it’s important to pursue your passions.”

It was in Costa Rica, where he had been freelancing as a surf guide for a few months, that he received the business idea he was yearning for. “At first I thought it would be a surf camp.” But Hurricane Michelle blew through in late 2001, flooding out the dirt roads leading to the coast, just when Dad had come to visit for a week. “We turned the car around and headed for the mountains.”

They found themselves in the Monteverde Cloud Forest—an ecological attraction replete with tours to find sloths, bats, butterflies, tropical frogs—and they discovered some commercial ziplines that gave the thrill of flying through the forest canopy across King Kong-like canyons. Not that ziplines are a Costa Rican invention. You find them at summer camps in the U.S. and as part of character-building challenge courses. Danny recalls rigging something like a zipline in his buddy’s backyard when they were in middle school. However, the idea of a widely popular commercial attraction that is integrated with a specific landscape—a meaningful tour with high-flying interludes—bloomed in the young entrepreneur’s mind. So he came home to Maui full of this idea and encouraged by something both he and his dad had observed about the Monteverde experience:

“It was really fun.”

As he developed his business plan, Danny made an impractical and (some would say) truly foolish decision that has become a  signature of Skyline’s financial model—he decided to give away some of the profits. This decision can be fully understood only by people who have grown up in a tourism-based economy, who have seen beaches hogged by hotels, public roads clogged by tour groups, and native customs flogged as ad slogans. “I couldn’t start a tourism business without giving back,” he decided. “If not, I could never hold my head high around all the kids I grew up with.”

His immediate vow was that 10 percent of company profits would be plowed back into reforestation and recycling efforts. He designed his tours as lessons in the plight of native Hawaiian ecosystems, naming each of his ziplines for endangered forest birds and planting native trees as part of the company’s regular practices. He joined One Percent for the Planet, a global movement of companies pledged to donate 1 percent of profits to environmental causes. He signed up with the Carbon Fund, and in 2007 Skyline Eco-Adventures became the first zipline company—and probably the first business on Maui—to be declared completely “carbon neutral.” Skyline has donated tens of thousands of dollars to environmental causes such as the Maui Coastal Land Trust, Maui Cultural Lands, The Nature Conservancy, and East Maui Watershed Partnership. His employees all accrue “service days”—they are paid for skipping work  to go volunteer with local causes.

Has this responsible generosity hurt Skyline’s progress as a business? Heck no. In 2002, Danny and his dad were lucky to get six customers a month. Today, Skyline has sixty-three employees on Maui. They operate two zipline sites: the original Haleakala Skyline located on Crater Road (five lines and an Indiana Jones-style swinging bridge), and the Ka‘anapali tour (eight lines) headquartered at the company’s retail shop. Skyline stocks this shop with its trademark gear and clothing.

In 2004, while just a toddler in the world of Maui tourism and offering an activity that many people still didn’t comprehend, Skyline received the “Eco-Adventures Operator of the Year Award” from the Hawai‘i Ecotourism Association. In 2007, Islands Magazine chose it as one of the “World’s Top 100 Sustainable Attractions.”

More flattering than the awards has been the swift emergence of imitators. Four other companies have hatched on Maui alone, and over a hundred have sprung up across the U.S. Danny is happy to see that most of these copycats have retained the “eco” mission in some way. After all, the environment is integral to the Skyline brand. For Danny, the experience has never been a competition for the longest, highest, fastest ride. “Even the longest zipline is over in less than a minute,” he says. What’s important is to have a meaningful (albeit exhilarating) experience of a natural realm. It’s the tour, not the zip, that stands at the core of Danny’s entrepreneurial invention.

Just when these zip-alike companies were turning Danny’s good idea into the newest Maui must-do, Dollywood called. The big theme park in Pigeon Forge, Tennessee, now has an attraction called the Great Smoky Mountains SkyZip—five zip crossings and a rather solid “swinging” bridge. That’s Danny’s doing. Word is out. He’s the guy. He gets inquiries from zipline startups all over the world (Dubai, Egypt, Australia, Thailand, New Zealand, Mexico, Vanuatu . . .) and has been flown as a zipline consultant to South Korea, Fiji, and various parts of the continental U.S. “We never refuse to help,” he says.

But the interest has been so demanding that Danny has adopted a new business strategy—franchises. Skyline has its own product line of rigging, carabineers, and pulleys; its own safety training programs; its own business philosophy; its own brand. “We were getting so many requests that it became apparent we needed to define how we’re going to help people. Franchising is a legitimate way to go through expanding.” He’s excited about a franchise opening now on the Big Island, where people will be flying over a 225-foot waterfall located just below Akaka Falls.

Though Skyline is expanding like mad, Danny won’t let it go crazy. Evidence of this:  his company is listed with Hawai‘i Business Magazine’s  “100 Best Places to Work in Hawai‘i,” an award determined by tabulation of anonymous employee surveys. “We try not to stress out our employees. We don’t harp on nitpicky things. We just try to be nice people, I guess, and give our crew the benefit of the doubt.”

Relaxed, matter-of-fact, he says, “We’re creating an overall experience that’s good for the island and good for everyone in the company. And we’re a leader in this new industry. It’s a good opportunity.”