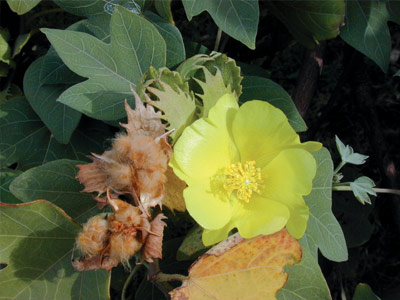 Early Hawaiians strung glossy yellow mao blossoms into lei, made dyes from its petals and leaves, and stuffed their bedding with the soft, reddish-brown tufts that surround its seeds. They nicknamed this Hawaiian cotton huluhulu, or hairy.

Scientists know it as Gossypium tomentosum, and it’s closely related to commercial cotton, Gossypium hirsutum. The Hawaiian cotton’s fibers are too short for industrial use, but the species nonetheless played savior to the textile industry. Insect pests hammer commercial cotton; when agriculturalists discovered that mao lacks nectaries, the nectar-producing organs that attract insects, they interbred the two cottons, passing on the genetic trait for the built-in defense.

Mao once grew on rocky, coastal landscapes throughout the Islands. Today the species’ survival is uncertain. Already extinct in the wild on Kauai, it’s threatened by habitat loss–humans prefer the same sun-kissed shores. Genetic dilution is another worry. The very industry that mao saved might yet be its undoing. Cotton isn’t a major crop in Hawaii, but genetically modified varieties are cultivated here. In 2011, seed companies planted 5,485 acres of transgenic cotton statewide. To decrease the possibility of gene transfer, the U.S. Department of Agriculture requires a forty-foot buffer between transgenic and wild Gossypium species.

Still, pollination isn’t an exact science when wind and weather come into play. And when honeybees swap pollen between plants, accidental hybrids can occur. Because mao interbreeds readily with other Gossypium species, its distinct characteristics could be smudged out over time. After generations, the two cottons could become indistinguishable. That would be an irrevocable loss.