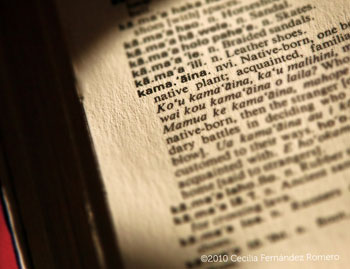 As we welcome you to this kama‘aina issue, it seems fair to ask: Who or what is a kama‘aina, anyway?

The question arises when visitors confront their first “kama‘aina discount” signs, and wonder why people who ordered the same meal or played the same round of golf paid 10 percent less.

The answer is harder to come by. The Pukui-Elbert Hawaiian Dictionary defines kama‘aina as “native-born,” literally a “child” (kama) of the land (‘aina). Pre-Contact, Hawaiians used two main words to distinguish themselves from others: kama‘aina if you were “of” a particular place (this valley, this island, etc.); malihini, or “stranger,” if you weren’t. You were kama‘aina of wherever you were born.

Once Captain Cook showed up, followed by the Americans, Russians, Chinese and everybody else, the original distinction had to change. People who were not “of” the Islands, by birth, ancestry, culture or whatever other yardstick, became malihini. Later, some malihini wanted to distinguish themselves from the whalers, plantation laborers and other riffraff. The Daughters of Hawai‘i—descendents of early missionaries—decided kama‘aina referred only to those families here before 1880.

Merchants set a lower bar: any customer with a Hawai‘i license.

Kiope Raymond, a Hawaiian-studies teacher at the University of Hawai‘i’s Maui College, doubts the meaning can be so simply elucidated. “I devote one entire class to that word alone,” he says. He endorses the “child of the land” definition, but notes that ‘ai also means “food plant,” often specifically referring to kalo, from which poi, the quintessential Hawaiian staple, derives. In Polynesian creation legends, kalo is the older brother of Man; its cultivation is also a spiritual and cultural obligation.

“Literally, kama‘aina means ‘I am a child of that which feeds me,’” Raymond explains. “I therefore have a duty to it. I need to malama [care for] that which sustains me.”

In other words, kama‘aina isn’t so much about bloodlines and birthplace, as about a fully intentional way to live. It’s about loving the ‘aina more than the discount.