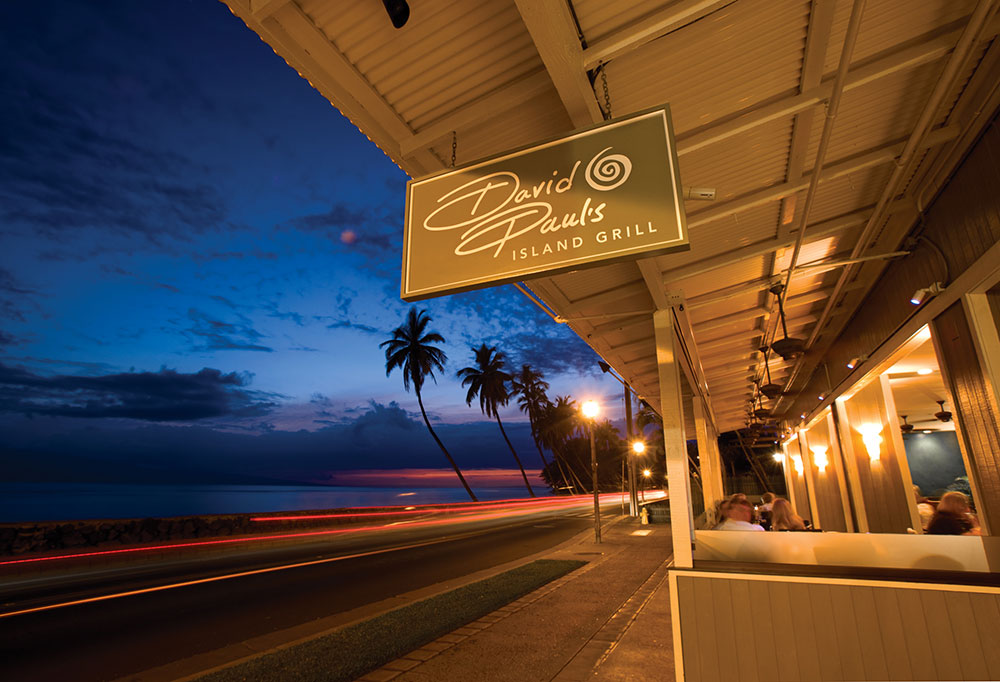 It’s not quite five p.m., and people are lining up to be let into David Paul’s Island Grill. The new Front Street restaurant has been open just a week, but it’s already got substantial buzz.

David Paul Johnson is back on Maui after a ten-year absence. Tan and spry, the celebrated chef looks like he spent the past decade bathing in the fountain of youth, rather than reinventing his career and cooking up plans for his comeback.

Almost twenty years ago, he opened David Paul’s Lahaina Grill down the street to rave reviews, only to lose the award-winning restaurant when his partner and financial backer went bankrupt. Johnson sold his share and relinquished the use of his name and recipes for ten years. In 2007, that contract expired. While the original Lahaina Grill remains unchanged (sans the David Paul moniker), Johnson’s newest project promises to stir up West Maui’s dining scene.

“I know the expectations for this restaurant are high,” says Johnson. “I believe I’m up to the challenge.”

Like many local foodies, I’m eager to see what culinary tricks the chef’s got up his sleeve. I readily accept an invitation to view the action from a “chef’s table” in the kitchen.

Winding my way through the new restaurant, I discover that Johnson’s creative touch extends beyond the plate. His renovations have transformed a decent venue into a gorgeous one. The oceanfront l¯anai overlooks the harbor, where surfers are catching waves. Inside, blown-glass lamps, woven furnishings, and copper railings add warmth to the spacious dining room. Eye-catching artwork includes a silhouette of Johnson and his youngest son fishing.

In the kitchen, chefs are busy preparing for the evening’s performance, frizzling leeks, stuffing ravioli, and submitting taste tests for Chef Johnson’s approval.

“Every day’s like a Top Chef Quickfire challenge,” says bandana-clad Caitlin Wertz, referring to the reality TV show where cooks race the clock to perform exacting culinary tasks. “We come in at two and find out what our menu is for five o’clock,” she says. “It keeps us on our toes.”

Aaron Rogers, the restaurant’s affable manager, alerts his staff that they might be interviewed and photographed this evening. “This is the awesomeness of being at David Paul’s,” he says. “Get used to it. Keep it loose, fun. Don’t feel like you have to act any different. This is who we are.”

They set a table for me between the prep counter and coffee station, complete with linens and fresh-baked rolls. I smear avocado butter on my bread as the kitchen’s ticket machine rattles to life, spitting out the evening’s first orders.

Johnson runs a meticulous kitchen; he notices everything from fingerprints on the swinging doors to a cook’s cup of soda sweating on the counter. Snatching a caprese salad from the line, Johnson assails the coarse peppercorns. “Regrind the pepper. This is unacceptable.”

Food runner Pablo Parez Polo responds to his boss’s perfectionism without hesitation. He’s worked with Johnson since 1994, back in his original restaurant. When Polo heard his favorite chef was back in business, he tied on his apron and rejoined him.

Most of the chefs at David Paul’s are young and hungry to learn. Their boss takes every opportunity to teach, methodically demonstrating how to shave five-sided carrots and prepare foie gras.

“You can’t make béarnaise with cold butter,” he tells one cook. To another, “These leeks look nice but have too much oil. Let’s drain it and use it for something else.”

As orders roll in, Johnson relaxes. He’s in his element. For fun, he sears some extra foie gras and asks his staff what to pair it with. Suggestions come from across the hot line: Mushrooms and crostini? Fig jam?

During his decade away from Maui, Johnson launched David Paul’s Diamond Head Grill, an ambitious but short-lived restaurant in Honolulu, complete with an apprentice chef program for youth at risk. He continued working with youth in his next venture, a barbecue cooking show called Playing with Fire.

Mentoring comes naturally to Johnson, who knows a thing or two about being “at risk.” A high school dropout, he spent time in reform school. It was there he first dreamt of becoming one of America’s great chefs while watching Julia Child on TV.

“I couldn’t focus on anything but cooking,” says Johnson of his younger years. “In the kitchen I could express my creative side.”

Indeed, an artist’s dedication to color and texture exemplifies Johnson’s cooking. Purple cauliflower florets, fried sage leaves, and crisp wheels of Parmesan decorate dishes as they sail out the door. Appetizers resemble multicolored Fauvist paintings—and taste like you might imagine a Matisse should: masterful.

Johnson has the good fortune of debuting a menu already graced by award winners: an ‘ahi and foie gras from his prior restaurant, and an ‘opakapaka and polenta entrée that won top honors at this year’s Maui Onion Festival. The savory ‘opakapaka dish is crowned with a few golden artichoke chips. Shil kochu chilis—little electric rods of spice—are sprinkled atop the local style ono.

Be warned: Johnson’s dishes can pack a spicy punch. He hands me a sample of curried cauliflower soup. The heat hits the back of my throat, is softened by a dollop of apple yogurt sauce, then dissolves, leaving an unabashed, bright curry flavor. I love it, though I suspect more cautious diners might find it a tad too hot.

But no one is likely to complain about the prices. At $36, the sumptuous lamb trio is the priciest entrée; most are under $30 and all can be order as half-portion “tastes.” If Johnson is looking to stir up Maui’s dining scene, this is a good start.

Another unexpected treat: wine aficionados can shop for their favorite bottles in the restaurant’s walk-in cellar. “It’s easier for people to see what they want, rather than reading it on a menu,” says Johnson.

As the night progresses, I savor butternut-squash ravioli with lobster and “Princess and the Pea” scallops atop a delectable edamame croquette. A fuchsia beet soup arrives in a small glass fishbowl, alongside a stacked beet-and-goat-cheese salad. Rosemary serves as a sharp foil to the earthiness of the beet, the creaminess of the cheese.

As they squeeze past me, servers flash genuine smiles. I’m in their way; I’m not assigned to anyone in particular, but each person stops to fill my water glass, clear my dishes, and ask if I need anything.

Johnson has nothing but praise for his employees, who’ve risen to the challenge of learning a new menu weekly. “Caitlin and Torey [Hall] are solid as a rock,” he says of his two top chefs. “I got really lucky and hired amazing people.”

So far, I have to agree. In this first rough-and-tumble week of business they should be sweaty-palmed and slightly frantic, like actors on opening night. Instead, they’re relaxed, even congenial. It’s almost unfair how smoothly the evening has unfolded.

For dessert, I retreat to the outdoor “Sky Lounge,” where a fire pit adds to the starlit ambiance, and speakers broadcast a hip remix of an old jazz tune. I happily devour a dessert sampler: lavender créme brûlée, chocolate decadence, and triple-berry pie. I congratulate Chef Johnson on a job well done.

“I’m just excited to be back,” says Johnson. “I’m really grateful for all the support I’ve gotten from the community.”

If this first taste is any indication, the excitement is mutual. Discerning diners will find that, once again, Chef David Paul Johnson has raised the bar for fine dining on Maui.