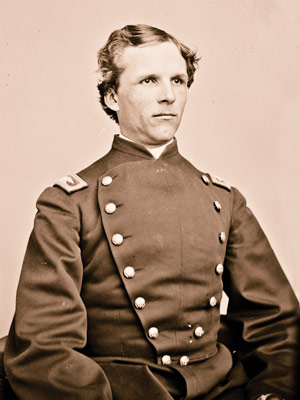 On November 19, 1863, President Abraham Lincoln delivered the Gettysburg Address at the site of one of the bloodiest conflicts of the American Civil War. Gettysburg marked what many now consider the beginning of the end of the Confederacy. Far less well known is the role a Maui-born officer played in that Union victory.

Samuel C. Armstrong was captain of the 125th New York Volunteer Regiment, an infantry company. On the crucial third day of the Battle of Gettysburg, he and his men halted the audacious rebel attack known as Pickett’s Charge, the South’s “high-water mark” of the war.

“We turned the rebel flank,” Armstrong wrote to his family back home in Hawaii, “and no wonder, for we did terrible execution. . . . It was one of the severest fights of the war and a glorious success for us.”

Armstrong’s bravery earned him promotion to major. In November 1863, he was given the rank of lieutenant colonel and placed in command of the newly formed 9th Regiment of United States Colored Troops. The son of abolitionist missionaries, Armstrong relished the opportunity to lead these former slaves into battle to end slavery in America.

Born in 1839 in Wailuku, Armstrong was raised as a subject of the Kingdom of Hawaii, and was a lifelong friend of David Kalakaua, the future “Merrie Monarch.”

Armstrong enrolled at Williams College in Massachusetts. In August 1862, he joined the Union Army, though as a citizen of Hawaii, he was under no obligation to do so.

“I was a Sandwich Islander, who had no local sympathies; but seeing the great issue be that of freedom or slavery for four million souls, I had given myself cheerfully and counted no sacrifice too great for the cause,” Armstrong wrote.

In an 1865 letter, Armstrong described his joy at fighting alongside native Hawaiians who had also joined the Union Army.

“As my orderly was holding my horse, I asked him where he was from. He said he was from Hawaii! He proved to be a full-blooded kanaka, by the name of Kealoha. . . . There is also another, by the name of Kaiwi, who lived near Judge Smith’s, who left the islands last July. I enjoyed seeing them very much, and we had a good jabber in kanaka. Kealoha is a private in the 41rst Regiment U.S. Colored Troops and Kaiwi is a private of the 28th U.S.C.T. in the Pioneer Corps.”

Armstrong ended the war as a brigadier general, and continued to work on behalf of African-Americans. His father, the Rev. Richard Armstrong, had dedicated his life to educating the Hawaiian people. The younger Armstrong believed the best way to help African-Americans was to educate them. By 1868, he was the first principal of today’s Hampton University; Booker T. Washington was a former student.

Justin W. Vance, history professor at Hawaii Pacific University in Honolulu, says Armstrong was one of 114 Hawaii-born soldiers known to have served in the Civil War. Influenced by the early Protestant missionaries from New England, most fought for the Union.

The author wishes to thank the Oahu-based Hawaii Sons of the Civil War Memorial Committee.