It’s a catchy name, and one that has a fitting backstory. “When people first tasted our lemonade, they would say ‘Wow!’ and a few sips later, they’d say ‘Wow!’ again,” Todd recalls. “So we thought it would be a fun name — we don’t take ourselves too seriously.”

It wasn’t long before demand started to outweigh supply. “We knew we had to grow the business,” Todd says, but they also wanted to avoid the risk of opening a store. “We’d never seen a lemonade stand for grown-ups, so we decided to make one. We found a listing on Craigslist for the location, and we built a stand.”

Soon after, the couple celebrated the grand opening of Da Lemonade Stand, a blink-or-you’ll-miss-it kiosk tucked behind a surf shop on Dairy Road in Kahului.

“We didn’t know if anyone would come, but we thought we’d try it,” Todd says. “We also had been experimenting with interesting flavors [that we] couldn’t offer at the farmers’ markets. We wanted a permanent location where people could get our lemonades every day.”

The gamble paid off. Within weeks, Wow Wow Hawaiian Lemonade was a hit. “I think it was word of mouth, combined with social media,” Todd says. “The business just took off.” 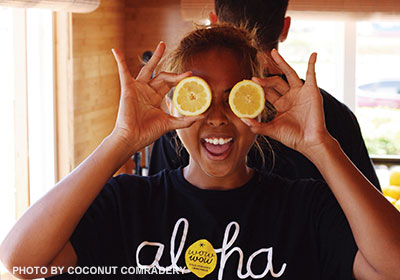 So much so that Todd and Chloe opened a brick-and-mortar storefront in Kihei last summer.

Wow Wow Lemonade, Maui lemonadeSix years ago, no one — least of all the Casselberrys — would have predicted Wow Wow’s success. Back then, the couple lived in San Diego, where Todd had a high-level corporate job as an athletic-apparel designer. But when Chloe gave birth to their first son, Haven, Todd began to yearn for a simpler life, away from the nine-to-five grind. Three years later, the Casselberrys lost Haven, and Todd abandoned the corporate world to focus on family. He and Chloe started a small lemonade and waffle business, selling their sweet treats and cheek-puckering concoctions at farmers’ markets throughout San Diego.

While visiting friends in Hawai‘i, Todd and Chloe met former Miss Hawai‘i Leina‘ala Drummond, who welcomed them with open arms and helped them begin to heal. Touched by the love and support they received from Drummond and the larger community — and moved, as well, by the tranquil beauty of the Islands — the Casselberrys decided to make Hawai‘i their home.

What’s the secret for the company’s success? Well, it’s not just the lemons.

“It comes down to community,” Todd explains. “We’ve focused on building long-term relationships.”

A growing roster of local farmers supplies the fruit and produce that’s chopped, squeezed, pureed and blended into Wow Wow’s gourmet beverages. The Casselberrys collect truckloads of lemons, mangos, strawberries, watermelon, kale, basil and more from their sources on Maui and the Big Island. But you don’t need to be a farmer to get in on the action. Maui residents with fruit trees on their properties also contribute; the company pays by the pound for their backyard bounty.

“We always choose local,” Todd says. Nearly 100 percent of Wow Wow’s ingredients are grown and harvested in Hawai‘i, including the sugar that’s used to make the company’s titular lemonade.

And then there’s those collectible mason jars.

Instead of plastic to-go cups, Wow Wow beverages are served in reusable mason jars with a straw hole drilled into the lid. Bring one of these “puka-hole” jars in for a refill, and you’ll get $1 off your purchase. It’s a clever marketing strategy. It’s not uncommon to see these jars around town; they’ve become an eco-friendly fashion statement. Todd is the creative genius behind Wow Wow’s eye-catching logo, which is now scrawled across the company’s signature mason jars, flasks, drink coozies, T-shirts and hats.

He admits he didn’t expect to become a trendsetter, but he’s happy to put a fresh twist on the classic canning jar. “Our goal was to encourage people to recycle,” he explains. “So we gave them an incentive.”

As for what to put inside those trendy containers, you’ll find more than just lemonade behind the counter at Wow Wow. When they opened the Kihei store, the Casselberrys decided to diversify to appeal to a broader range of palates, and offer a delicious array of options, from smoothies and kombucha to sparkling drinks and acai bowls.

Todd comes up with the recipes; Chloe, who has studied nutrition and whole foods for many years, tweaks the flavors until they’re just right. “I enjoy coming up with new products,” Todd says. “But Chloe has always been good at capturing the details and making things complete.”

Wow Wow now has twelve employees and a commercial kitchen and warehouse in Kahului. That’s where the magic happens: five days a week, staff are hard at work scooping and measuring ingredients, peeling lemons and limes, and hand-pressing fruits to make the company’s thirst-quenching creations. A seasonal business, Wow Wow sources and squeezes close to 4,000 pounds of lemons per month during the busy spring and summer months, and a little less during the slower months.

A little more than a year ago, the company started bottling its fresh-squeezed beverages to sell in resorts, restaurants and grocery stores islandwide. Wow Wow employees mix, bottle, cap and label single-serve juices in the commercial kitchen; if you peek inside, you won’t find any conveyor belts or labeling machines. “We bottle 2,000 to 3,000 lemonades a month during busy months,” Todd says.

That labor-intensive process is part of what makes the company stand out. There’s more.

To give back to the community that mended their hearts, Todd and Chloe established the Wow Wow Hawaiian Lemonade Kokua Program, which donates a percentage of sales each month to a designated organization or cause on Maui or O‘ahu, from the Maui Fire Department, to the Hawaii Children’s Cancer Foundation, to last September’s Project Kokua, a fundraiser for Big Island families affected by tropical storm Iselle.

And while their company is growing by leaps and bounds, the Casselberrys still pitch a tent at the same farmers’ markets and street fairs they started with three years ago.

“Our success has come from the community,” Todd says. “We don’t take that for granted.”

At this rate, it’s doubtful that things will ever turn sour for Wow Wow Hawaiian Lemonade. Todd plans to add another store in Kahului and further expand the company’s bottling operations.

“We want to be a brand that Hawai‘i is proud of,” he says. “But our number one goal is to make people smile.”