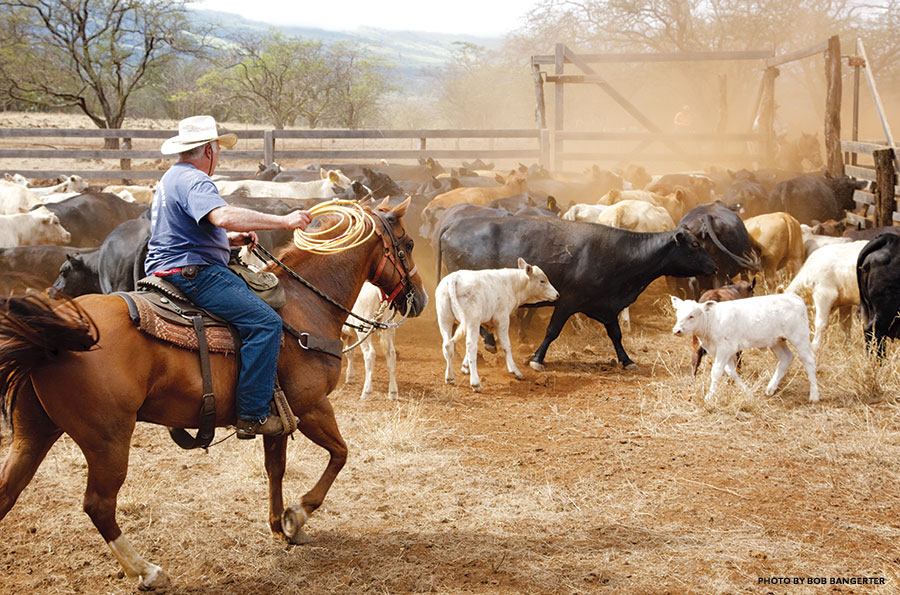 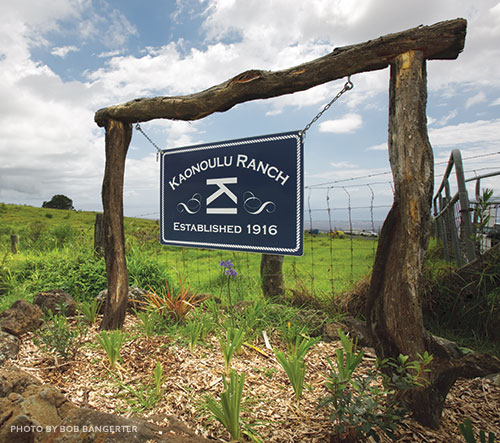 Follow Kaonoulu Ranch’s family tree, and you’ll connect to generations of Upcountry Maui life. From the family that owns these rolling pastures on the slopes of Haleakalā, to those who have tended its cattle for a century, Kaonoulu spreads its branches far and its roots deep into the Kula soil.

Sugar and ranching were Maui’s cash industries when Kaonoulu got its start; pineapple was just beginning its rise. Now sugar is shutting down, and pineapple is grown only on a small scale, but Kaonoulu and other ranches remain, protecting thousands of acres of open space. Pronounced ka-ono-ulu (translated from Hawaiian as either “the delicious breadfruit” or “the desire for breadfruit”), Kaonoulu is perhaps less known to the public than Haleakala Ranch, with the highway to the summit bisecting its emerald pastures, or ‘Ulupalakua, with its winery and elk burgers. But Kaonoulu has a unique distinction.

The ranch is an almost complete ahupua‘a (an ancient Hawaiian land division), stretching from mountaintop to sea: from the top of Haleakalā to near the island’s southern coast. The ranch no longer owns the coastal land that includes Ko‘ie‘ie Fishpond, where cowboys used to catch mullet. But only a few miles above Pi‘ilani Highway and the houses and condominiums that fill those seaside acres, cowboys still herd cattle across rugged dryland terrain.

The Rice family, which purchased the ranch in 1916, traces Kaonoulu’s history back to a Hawaiian named Keohokoloe, who acquired an immense tract during the mid-1800s and then sold it to a Chinese rancher and farmer named Yung Hee, a former sugar contract laborer. Yung Hee repeatedly refused to sell it to his neighbor, Col. William H. Cornwell, a colorful character who owned Waikapu Sugar Plantation and was known for his racehorses and his friendship with King Kalākaua. Then Yung Hee went home to China in 1893, and word filtered back that he was ill and would not return to Maui. Cornwell was on the next ship sailing to Shanghai. On the same ship was a certified check from sugar baron Claus Spreckels, who also coveted the Kula property. In Shanghai, Cornwall quickly disembarked, got to Yung Hee before the check did, and won the land.

Henry Rice is not entirely sure that is a true story. But however the original transaction happened, it laid the foundation for his family’s home and business. Rice’s grandfather Harold W. “Pop” Rice purchased the 10,000-acre property from Col. Cornwell’s daughter Blanche and her husband, John Walker, in August 1916, also acquiring 25,000 acres in leasehold lands.

Old-timers remember stories of Pop Rice, polo player and prominent politician, who married Charlotte Baldwin, daughter of sugar baron Henry Perrine Baldwin. Rice expanded the ranch and ran meat markets in Wailuku and Honolulu to sell beef from 4,400 Hereford cattle and pork from a Kīhei piggery. Fields of corn helped feed 200 pigs, there were a small dairy and a poultry farm in Makawao, and the Kaonoulu stables bred and trained polo ponies for sale around the world. 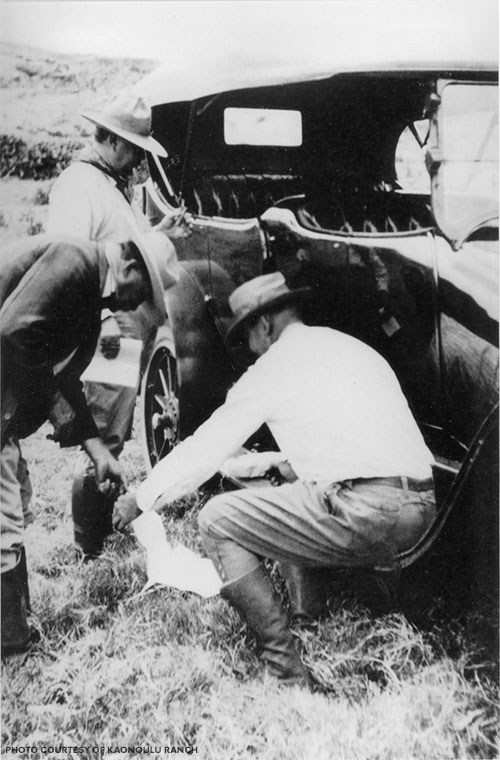 In the early 1930s, fresh out of prep school, Pop’s son Harold Frederick “Oskie” Rice became full-time manager of the ranch, a job he continued until his death in 1983. In 1955, Oskie and his brother-in-law Garfield King purchased the ranch from Pop, a partnership that still exists between Rice and King cousins today. (The ranch is now led by Charlie King, managing general partner, with his brother BK and Henry’s daughter, Wendy Rice Peterson, as general partners, and Ken Miranda as general manager.) Oskie continued to improve the ranch, and sparked the growth of polo, rodeo and the fledgling Maui Roping Club by his gift of the Oskie Rice Arena above Makawao. His sons, Henry and Freddy, grew up riding and roping, winning polo tournaments on the ranch’s ponies.

The ranch’s evolution has taken place against the backdrop of an always-challenged island industry that survives only by hands-on stewardship combined with canny business strategies. Faced with frequent droughts, high costs for everything from fertilizer to labor, and uncertainty about what markets will offer when cattle are ready for sale, Maui ranchers cope by diversifying. Kaonoulu leases land to three farms, and owns a commercial fencing company and mainland warehouses.

This centennial year, members of Kaonoulu’s extended family are focused on ranching memories: of herding on horseback before dawn, of roundups and branding, and of names like Ernest Morton, Hua Kekiwi, Harry Auweloa, Willie Kei Poepoe and other paniolo (cowboys) who rode the ranch in the twentieth century. There was Kenji Ikeda, who managed the race horses (“the best jockey Maui ever saw,” says Henry Rice), and Winifred “Toyo” Takeyama, a prize-winning member of Pu‘unēnē’s legendary Three-Year Swim Club, who grew up to be secretary to three generations of Rice ranchers. The Moriharas, who established Kula’s Morihara Store, worked for the Rices for years, installing gardens at the family’s Kula house.

Descendants of some of these longtime employees still work on the ranch. Other people “come up to me all the time to say, ‘My father used to work for your grandfather,’” says Peterson. “There’s a sense of kinship and friendship and family that continues the legacy of ranching on Maui.”

Lopes also remembers looking down from Kula when Kīhei and Wailuku Heights were almost uninhabited and Kula traffic was rare. When Kaonoulu cowboys used to herd the red Santa Gertrudis cattle Oskie had introduced to higher pastures, “It was something to see. It was a sea of red,” Lopes recalls. “We’d get arrested these days” for “flooding the highway” with a herd of cattle.

Retired cowboy Merton Kekiwi worked for Oskie Rice after growing up on the ranch, where his dad, Hua, was farming and fencing foreman. Ranching was hard work, but “a good life.” Paniolo rose at 4 a.m. to move cattle before it got so hot that the animals sought shade and refused to move. Cowboys repaired water lines, built and fixed fences, set up water troughs, trained their own horses.

Former cowgirl Bonnie Hew Wong used to go with her father, Eddie Hew, to help at roundups and drives. In 1975, offered the chance to work full-time at the ranch, she quit her nurse-training program at Maui Community College and got back on a horse. Bonnie and husband Wendell Wong still go back to the ranch to help at roundups and branding. Like others in the Kaonoulu Ranch ‘ohana, Wendell has family connections — paniolo Harry Auweloa was his grandfather.

Bonnie Wong is helping the Rices plan a reunion and grows teary-eyed about the ranch’s centennial. “I’m grateful for that,” she says of the ranch’s longevity under the ownership of one family. “They’re so humble,” she adds. “They take care of their people.”

And up at the family home, where Henry Rice and wife Sandy have meticulously maintained the historic fittings and atmosphere of earlier times, the family looks forward to reunion with dozens of relatives. Such gatherings are not unusual. Family members show up for branding and other ranch activities, and “It’s fifty-two for dinner at Christmas and Thanksgiving,” Peterson says.

The centennial was also an occasion for Henry and Freddy—co-grand marshals of this year’s Makawao Parade—to honor their dad, known as the father of the rodeo that’s held on the July 4th weekend at Oskie Rice Arena, above Makawao town. Thirty-five horseback riders joined them.

Henry Rice took over the ranch in 1989, retiring as a senior executive at the Bank of Hawai‘i in Honolulu. “My family said I was playing around long enough, and I had to come home and work,” he jokes. Now the ranch’s senior advisor, he looks to a future with the next generation in charge of a diversified company that runs about 1,500 head of cattle (some of them Coriente, sports-oriented animals used in rodeos). The ranch participates in conservation efforts as a member of the Leeward Haleakalā Watershed Restoration Partnership, which aims to restore koa forests at higher elevations; the family will plant 100 koa trees to commemorate the centennial.

In 2014, Kaonoulu purchased the Miranda Fence Company and hired as ranch general manager Ken Miranda, who moved his company to Maui and brought along ranching expertise from years on Hawai‘i Island. Miranda is married to Morag, Freddy Rice’s daughter. Together, the Mirandas work to promote youth rodeo programs. And of course, their children, Daniel and Elizabeth, have joined their cousins Kaulike Rice (Freddy’s grandson) and Scott Baker (Henry’s grandson) as the next generation to ride Kaonoulu pastures.