There’s a good reason not many travelers take this road. West Maui’s rugged north shore was almost included on my list of Things-I-Will-Never-Do-Again. Kahekili Highway (Route 340) has the hairy hairpin turns, the steep oceanside drops, and the narrow one-lane sections that make you think, “This might be my last scenic view ever.”

Many car rental companies advise you not to take this road. So there’s the thought of the awkward phone conversation with the rental clerk: “You’ll find the car somewhere on Kahekili Highway. Yeah, the place you advised us not to go. The car is down below mile marker 16. Just peer over the cliff, but be careful—there’s no guardrail. Great view, though.” 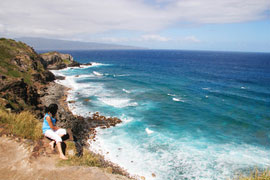 Indeed, West Maui’s north shore has some of the most ravishingly beautiful wild ocean and coastline combinations in the world, so my husband, Will, and I decided to head off for adventure.

The twenty-five-mile drive from Kapalua to Wailuku began with deceptive calm—and, at mile marker 32, one of Maui’s loveliest places: Honolua Bay. The pretty crescent beach is a perfect spot to peek at coral and bright fish. Surfers slicing the curling waves showed why this is one of the prime surfing breaks in the world.

We drove on, every turnoff providing a Kodak moment: brooding cliffs, green headlands, crashing waves, and bizarre rock formations. From the cliff above Nakalele Point, half a mile past marker 38, we could see Nakalele Blowhole shooting spray fifty feet into the sky. Geologists say blowholes are created when pounding surf forces air and water through a hole in the lava shelf. Hawaiian legends maintain that the rumbling sounds are mo‘o, great dragon lizards that inhabit some blowholes.

At mile marker 42, the “highway” became a narrow, intimidating road carved into the mountain; a new series of mile-marker numbers heralded the transition. Drivers heading from Kapalua to Wailuku instantly realize they’ve made a wise decision to be on the side hugging the mountain and not the ocean side, sans guardrails. Travelers coming from Wailuku wore nervous looks. I spotted a passenger with her eyes tightly closed.

After mile marker 42—and just before mile marker 16—we stopped at the six-foot-high Maui Bell Stone. Of course we banged rocks on it, trying to make it ring. Long ago, Hawaiians used large volcanic rocks as bell stones for communication: to announce an important birth or warn commoners to get out of the way if a chief was approaching.

A short distance past the bell stone, we followed a slippery trail to a series of tide pools at the ocean’s edge. We saw small pieces of semi-precious olivine embedded in the rock—and a sign that held a dire warning: people have drowned in this deceptively tranquil place, washed off the outer rocks by freak waves.

James Maar, a Maui resident, was someone who’d lived to tell. “I was standing on the rocks when a big wave came from behind me,” he told us, “It rolled me twenty feet across the jagged rocks.”

James has long scars on his legs and back to prove it, but they didn’t deter him or the other bathers. One gung-ho character dived headfirst into one pool after another. We dipped our toes in the nearest pool, then headed back to the car.

Why was there a sign saying “Narrow Road Ahead,” when we’d been on a narrow road for at least half an hour? Was the worst yet to come? Yes. After a steeply descending, white-knuckle, one-and-a-half-miles stretch of one-lane road, we arrived at the isolated fishing village of Kahakuloa.

What a peaceful place! It seemed perfect to learn that in ancient times, a taro patch in Kahakuloa Valley was named a Place of Refuge, a haven where those who broke kapu (laws) could find sanctuary. Once inside a Place of Refuge, a fugitive could shout the Hawaiian equivalent of Home Free! and be considered under the  protection of the gods.

We stopped to take photos of this glimpse of old Hawai‘i, today home to about 100 people and two picture- perfect churches. The breeze was fragrant with flowers. At Ululani Ho‘opi‘i’s roadside stand, we bought a CD of mellow Hawaiian music by Ululani’s husband, the well-known recording artist Richard Ho‘opi‘i.

The valley is an enchanting place of watery lo‘i (taro patches) enclosed by ancient rock walls, ti gardens, palm groves and noni trees. One needs four-wheel drive to head into the deep valley, and most of it is private farmland, but Maui Eco–Adventures offers a Kahakuloa Cultural Experience for groups of four or more.

We were lucky enough to have Karen Lei Noland, artist and owner of nearby Kaukini Gallery, offer to take us into the valley. Off we headed, stopping after we’d forded a stream and trekking on foot via an Indiana Jones-style swing bridge.

Karen introduced us to Oliver Dukelow, whose family and friends were clearing and planting lo‘i. The strong young men, knee deep in water and mud, smiled a welcome.

Suddenly shrieks and screams shattered the peace—girls in an adjoining field were having a riotous mud fight. Then three pretty girls, sopping wet and covered in mud, raced into view, dashed across the swinging bridge and jumped into the deep stream. This totally interrupted the work. But soon everyone was back, digging in the mud. This is a hardworking valley!

We returned to Kaukini Gallery, perched atop a hill, and enjoyed breathtaking views of Kahakuloa Valley. What a discovery, in this out-of-the-way spot, to find such a selection of paintings, ceramics, jewelry, and woodwork by local artists.

Nearby, the 636-foot-high volcanic dome Kahakuloa Head towers over the deep, blue ocean. In the eighteenth century, this was a favorite cliff-leaping place of Kahekili. Maui’s legendary last chief seemed a fitting namesake for this formidable highway.

After the most extreme hairpin turn, we reached mile marker 10 and the Turnbull Studios, Gallery and Sculpture Garden. Bruce Turnbull founded the studios in the early seventies, and with nephew Steve Turnbull, and Steve’s wife, Christine, has created a wonderland.

Works by Bruce and Steve, in wood and stone, flow in harmony with the natural surroundings of this wild headland. Christine’s whimsical sculptures of children welcomed us to the garden, with its recently added trail.

Rounding the last curves of the road into Wailuku, we agreed that this is a magical part of Maui, unspoiled and lost in time. And serendipitously—thanks to the reputation of the road we’d feared to take—it will probably stay that way.

When you go: The drive takes about four hours. Expect to spend most of the day sightseeing, and pack water, sunscreen, beachwear, and snacks.