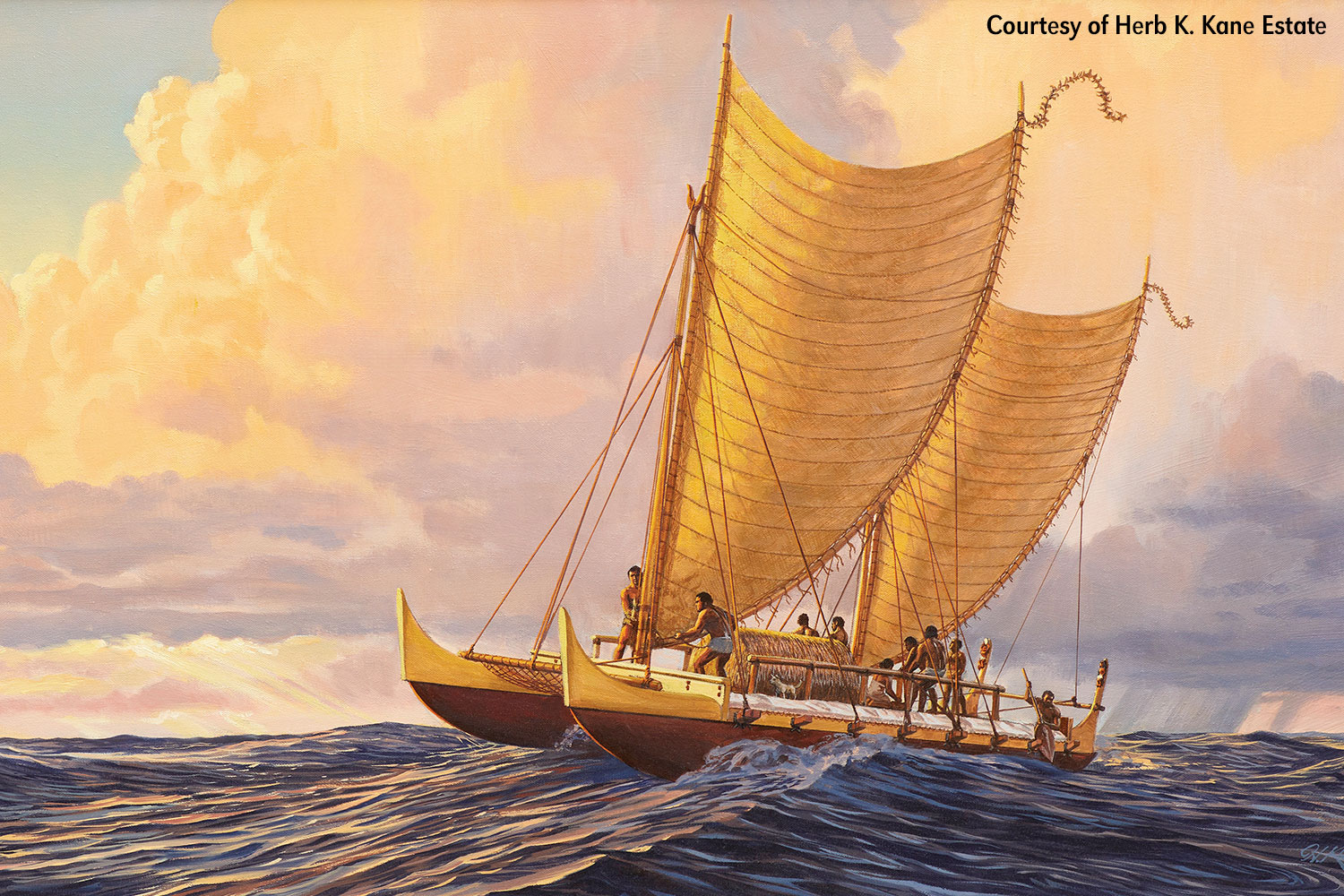 “A United Airlines jet may have transported me to Hawai‘i, but it was a sailing canoe that brought me home.” — Herb Kāne

It was in the glossy pages of National Geographic that I first saw Herb Kāne’s paintings of Hawaiian canoes, their rich detail bringing history to life. In 1976, I watched, enraptured, a PBS documentary about the double-hulled voyaging canoe Hōkūle‘a, which journeyed from Hawai‘i to French Polynesia, an event driven in no small part by Kāne himself.

In 1991 I was living in Chicago and volunteering at the Field Museum of Natural History, giving tours of a late-19th-century Maori meeting house. I happened upon a book by Kāne called Voyagers: A Collection of Words and Images, which included many of the paintings I remembered from Nat Geo as well as others depicting Maori canoes. The latter in particular intrigued me, and I wrote to Kāne, asking about his renderings of these vessels.

To my utter delight, Kāne wrote back. He thoroughly answered my questions and actually extended an invitation to visit with him the next time I was in the Islands. In 1993, I did. So began a friendship spanning nearly 20 years. Mine is a more personal perspective on both the man and the artist, and it is with love and aloha that I share Kāne’s story with you.

Herb Kāne was born in Minnesota on June 21, 1928. His father, a Hawaiian-born folk historian and musician, fascinated Kāne with his tales of ancient Polynesians’ voyages to Kahiki, the ancestral homeland of Hawai‘i’s first settlers. “My father infected me with his love of legends and history,” wrote Kāne in Voyagers. “Friends would come by in the evenings and I would fall asleep listening to tales being woven on the veranda.”

In 1935, Kāne’s family moved back to Hawai‘i. Soon after, his parents took him to an art exhibit that changed his life. “I took refuge in quiet corners from which I could safely view the paintings,” Kāne wrote. “I [saw] the artist approaching me. He said a few pleasant words, but all I could remember was that he had actually spoken to me. I went home and began crayonizing every scrap of paper that came to hand.”

Kāne joined the Navy in 1947, the same year Norwegian adventurer/scientist Thor Heyerdahl set out on a wooden raft to travel from South America to Polynesia by drift voyaging, a technique that relies on prevailing winds and currents, not navigation, to reach its destination. Heyerdahl’s trip sparked renewed interest amongst historians as to whether ancient Polynesians had been accidental or purposeful voyagers. For Kāne, there was no question: he wholeheartedly believed that his father’s stories were records of actual voyages that had taken place.

After his military tour, Kāne attended the School of the Art Institute of Chicago and earned his graduate degree at the University of Chicago. Modern art was all the rage at the time, but Kāne sought instructors who taught realism — the nuances of color and tone, spatial relationships, and the use of light and shadow. He landed a job at a commercial studio, where he illustrated ad campaigns for United Airlines and Kellogg’s, as well as what he considered more interesting projects, such researching and illustrating Polynesian canoes and other sailing vessels for World Book Encyclopedia. But commercial work didn’t satisfy his artistic itch.

“Advertising paid well, but it was not the kind of storytelling I wanted to do,” wrote Kāne. “The end came when I won a Green Giant campaign, and for a year did drawings and paintings of that big green fairy until I could no longer suffer it. It was time to move on.”

Before Kāne’s father passed away, he made a request of his son: to return to Hawai‘i and use his art to benefit the Hawaiian people. So in 1970, Kāne moved his family to O‘ahu and pursued projects that satisfied both his father’s wish and his own quest for historic insight, including 14 paintings depicting traditional Hawaiian vessels, titled “The Canoes of Polynesia.” The beauty and cultural significance of the series made such an impression that it was purchased by Hawai‘i’s State Foundation on Culture and the Arts and was prominently displayed in the state capitol.

Beyond his artistic and architectural interest in canoes, Kāne believed that the wa‘a kaulua was central to the revival of the Hawaiian people. At the time, Hawai‘i’s indigenous culture was being dismissed as primitive. Use of the Hawaiian language was discouraged, the practice of hula was forbidden and Hawaiian fishermen powered plywood canoes with outboard motors instead of paddles. “When a culture loses an object, it loses its use and eventually its meaning, and cultural disintegration takes place,” Kāne wrote.

While working on “The Canoes of Polynesia,” Kāne met anthropologist Ben Finney and champion canoe-paddler Tommy Holmes. The trio shared an interest in ancient canoes, and in 1973, they formed the Polynesian Voyaging Society. Their goal: to build a historically accurate wa‘a kaulua and sail it from Hawai‘i to Tahiti, proving once and for all that the ancients had planned their long-distance voyages. Kāne also believed it would be the impetus for Hawai‘i’s cultural renaissance.

“Everything in Hawaiian culture was related to the canoe in some way,” wrote Kāne. “If we could rebuild that central artifact, bring it back to life and put it to hard use, this would send ripples of energy and reawaken a lot of related cultural components.”

In 1975, the canoe was complete. They named it Hōkūle‘a, which means “star of gladness,” and which also is the Hawaiian name for Arcturus, an important navigational star for ancient voyagers. On March 8, 1975, the team launched the Hōkūle‘a and sailed around the Hawaiian Islands. “At every port of call, Hōkūle‘a was warmly received as the symbol of mutuality, a reminder of the resourcefulness, inventiveness and courage of their ancestors,” wrote Kāne.

On May 1, 1976, the Hōkūle‘a set sail from Honolua Bay on Maui. Using only the stars, the sun, the moon and the swells, the crew traveled south to Tahiti and proved beyond a shadow of a doubt that ancient Hawaiians had indeed planned and executed their incredible long-distance voyages.

The story of the Hōkūle‘a is just part of Kāne’s legacy, and his reputation as an artist is just as stellar. His prolific body of work beautifully illustrated the legends, myths and stories of his ancestors, and brought to the forefront the relevance of the Hawaiian people and their culture. Every piece was painstakingly researched down to the smallest detail, and Kāne’s style was often described as realism blended with the supernatural. A historian with a paintbrush, Kāne helped Native Hawaiians see themselves as a culture with a rich, fearless history, and a people with significant contributions to the world. In 1984, Kāne was named a Living Treasure of Hawai‘i, and his legacy is one of awakening.

Kāne passed away on March 8, 2011 — on the 36th anniversary of Hōkūle‘a’s nascent voyage — but his legend lives on. At this writing, the Polynesian Voyaging Society is preparing Hōkūle‘a for her next adventure: a 41,000-mile, 42-month circumnavigation of the Pacific. Along with her sister wa‘a kaulua, Hikianalia, Hōkūle‘a will visit 46 countries and archipelagoes, nearly 100 indigenous territories and 345 ports.

“ I am in awe of what Herb accomplished,” says Gary Koeppel, owner of Hāna Coast Gallery and a close friend of Kāne. “And he did so with such remarkable humility.”

“Herb brought to life … the centuries-old symbols that had been forgotten or suppressed over generations,” said Dale Bell, producer and director of the PBS documentary “Voyage of the Hōkūle‘a.” “Islanders who touched her hull, who sailed on her decks, who squinted as she sailed into sunrises and sunsets — everyone felt a new identification with the Hōkūle‘a in ways that transformed concepts of human rights, civil rights, language, dress, education, and above all, pride in being a Polynesian. And Herb did it all with a simple paintbrush … and a soul as vast as the Pacific.”

Herb Kāne’s fine-art prints and books are available for purchase at herbkanehawaii.com.