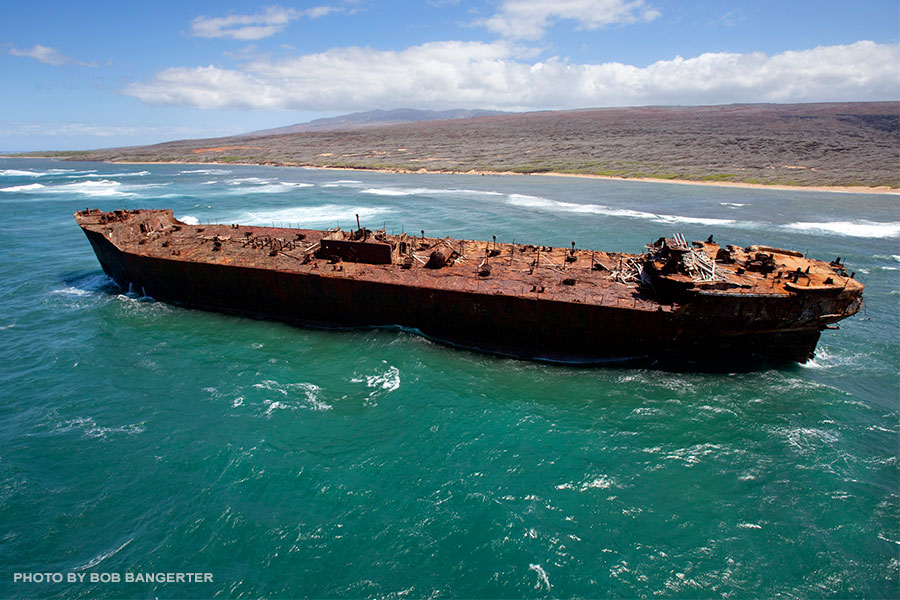 Walk the wave-tossed bit of Lana‘i known as Shipwreck Beach (Kaiolohia in Hawaiian), and you may find yourself with what a friend of mine calls “the feels.” A rusty, abandoned barge looms offshore, seeming to lean at you. There’s a long history of the feels here.

In the pre-Contact past, Lana‘i was known as the dwelling place of man-eating spirits, until a kolohe (mischievous) prince of Maui was banished there by his frustrated father. Kaulala‘au cleared the island of these baleful spirits and earned his father’s love and respect.

Fast-forward to World War II and the need to get fuel around the Pacific for the U.S. war effort. With steel scarce, the government had barges built of ferroconcrete — a frame of metal mesh or steel-alloy rebar to which a concrete mixture was added in layers. These barges were towed all over the Pacific, but after the war, many were scuttled, including this one, labeled YOGN 42. Lana‘i cultural expert Kepa Maly told us this:

“In 1954, Isle Ways was contracted by the Navy to haul the ship from Pearl Harbor. The tug operators were told to choose a place along windward Lana‘i, push the ship onto the reef and leave it there.”

And there she sits, listing as the years and salt spray seep into her pores, rusting the rebar and making mush of the concrete. This September marks the seventieth anniversary of V-J Day — the Allies’ victory over Japan. What memories, also slowly crumbling, may she hold inside her hull, haunted by the war all those years ago?

In my research, I came across this comment by James Loughran on a travel site: “Drove down to Shipwreck Beach in 1992. . . . Out of nowhere, a severe storm blackened the sky. . . . Lightening seemed to strike everywhere, the winds nearly knocked me down. . . . I glanced at the wreck as lighting struck it. It took my breath. . . . The SUV rocked violently, I thought the wind would blow it over. . . . Then, as suddenly as it came, the storm stopped. . . .I drove off, looking back at the wrecked ship. I will never forget that day.”

Others have it — the feels — at this site, with this vessel. It may be that the shadows of events remain as long as there is something to cling to.