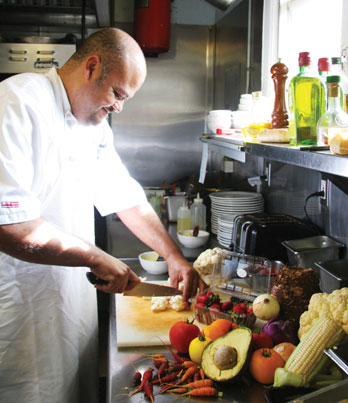 At the back door of Market Fresh Bistro, co-owner and chef Justin Pardo hefts in boxes overflowing with fresh broccoli, rainbow chard, arugula, and beets from Kupa‘a Farms. As the chef surveys his Thursday delivery, you can almost see new recipes forming in the intensity of his gaze. “This was just picked this morning,” he says, “and it will be gone by Saturday.”

Pardo is passionate about his restaurant’s food—not just how it tastes, but where it comes from, and how long it takes to travel from the farm to your fork. His stated mission is to source ingredients from within one hundred miles of his Makawao kitchen. During Market Fresh Bistro’s first year of business, the restaurant dished up over 24,000 pounds of Maui-grown fruits and vegetables.

Pardo took over the eighteen-table courtyard restaurant in January of 2009, along with his sister, Olivia Coletti, and her boyfriend, David Magenheim. Originally from New York, the trio function as a cosmopolitan, super-attentive team; they greet regulars by name and offer coffee drinkers to-go cups as they depart.

Their local fan base is already well established, particularly where the twice-monthly farm dinners are concerned. Every other Thursday, the chef creates a prix-fixe menu showcasing a single farm’s harvest. Advertised by word of mouth, these one-farm feasts sell out far in advance. A portion of the proceeds goes to Makawao Elementary, where young locavores-in-training manage a school garden.

Pardo celebrates his favorite growers by serving the fruits of their labor at the peak of ripeness. “If you order asparagus,” he says, his native Bronx accent emerging as he punctuates each word, “I want you to taste that asparagus.”

Pardo’s thoughtfully conceived menu changes as local crops come in and out of season. Stop by Saturday evening and you might find a savory ragu that’s been slow-roasted for two days, made with Haleakala Ranch lamb; or braised fennel from Coca Farms with Tasmanian salmon, a regional specialty that’s only available a few weeks out of the year. For breakfast, daily frittata specials feature Kula asparagus or Hamakua mushrooms. Diners have the option of paying two dollars more for free-range eggs from nearby Olinda.

Are the locally raised delicacies worth the extra coin? You bet. Fresh-laid eggs have a more vibrant, “eggier” flavor than those that have lost taste and nutrients while sitting on delivery docks. And after all, who wants to eat food with jet lag?