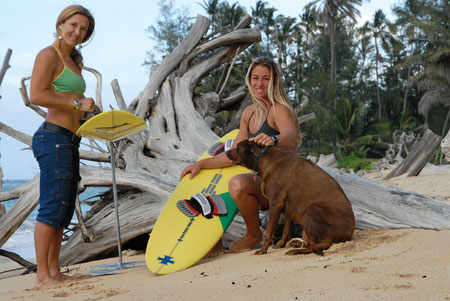 In May 2006, Andrea Moller lost a race. After training hard all year and paddling her guts out in a one-man outrigger canoe for 32 miles from Moloka‘i to O‘ahu, she failed to cross the finish line. “I got to O‘ahu second,” Andrea explains, “but took the wrong route and didn’t see the crossing line.”

Maria Souza met her on the beach with lei and water, and Andrea, spent and dehydrated, burst into tears as she realized she hadn’t actually finished the race. Still, for Andrea, who, like Maria, is a surfer, windsurfer, paddler, stand-up paddler, paddleboarder, and foilboarder, that crossing was her biggest accomplishment to date.

“I had no escort boat, no water, no food, no coach, no guidance,” Andrea tells me as friend and tow-in surf partner Maria nods affirmation. Each competitor or team crossing Kaiwi Channel, some of the trickiest water in Hawai‘i, is required to have an escort boat that carries supplies and knowledge of the coming weather and the best course to take.

But Andrea’s escort-boat captain had failed to refuel before departing from Moloka‘i and he ran out of gas midway across, disappearing from Andrea’s sight. Not knowing where the boat had gone, Andrea kept paddling toward O‘ahu with nothing but her own keen senses to guide her. Then dehydration began to take over. “I’m just glad to be alive,” Andrea says. “I needed to live that experience to know I could do it. I completed the race as a waterwoman.”

“Waterwoman” describes what’s at the core of Andrea and Maria: courage, endurance, water savvy. These two Brazilians challenged the status quo of Hawai`i’s big-wave surfing by being the first and only women’s tow-in team to surf Jaws, the legendary wave at Pe‘ahi on Maui’s north shore. The men who cut the first tracks down the face of Jaws describe the wave as terrifying and deadly. Standing on the cliffs at Pe‘ahi, you can watch rainbows forming in the spray rising 100 feet in the air from a 50-foot wave. The power of the wave shakes the island. People are tiny out there, miniscule. Yet these two women have now carved tracks of their own.

Why do Maria and Andrea want to surf Jaws? Is it about being the first or the best or keeping up with the boys? Is it about competition or money? Both women have jobs in addition to being mothers—Maria travels and sells clothes for her company, Amazon Swimwear, and Andrea is a dive instructor. They have found sponsorship hard to come by, and purchase much of their own equipment, earning what they can and spending what they have to keep themselves afloat. It’s not about money.

“I got over competition after being a gymnast in high school,” Maria says. She tells me that when she started paddling outrigger canoes four years ago, she trained but didn’t race during the regatta season. “It’s good cross-training for the other sports we do, but I didn’t care about racing.” She found paddling meditative—“I go in, totally in,” she says—and loved that it brought her closer to the culture and history of this place she calls home.

As for big-wave surfing,  “the competition is against ourselves,” Andrea says. “We’re just two little athletes with the will to be out there.” And she’s right—Andrea stands 5’6″ and Maria is even smaller, and against a gaping backdrop of ocean they are tiny. “What we have,” Andrea continues, “is trust in each other and in our water skills.”

Andrea and Maria grew up on Brazilian beaches and have more saltwater than most in their blood. Andrea lived on the island of Ilhabela, Maria in Reef City. Maria, whose indigenous connection to Brazil goes back to her plant-healer grandmother, spent every morning before sunrise at the water’s edge—her mother believed that “good angels came early to heal the Earth.” Being on the beach daily and experiencing all kinds of ocean conditions, Maria developed an ability to rescue people in rough surf and saved many from drowning. This skill came in handy later when she had to rescue herself in the big waves.

In 1988, Maria visited Hawai‘i from Newport Beach, California, where she’d been attending school and bodyboarding and surfing in the cold Pacific Ocean. She came for one week, smelled the air, surfed the warm water, felt the tropical environment much like Brazil’s, and “found home.” She lived on O‘ahu for the next five years, where she met Laird Hamilton while surfing Waimea Bay. They married and she moved to Laird’s Maui home.

Hanging out with the major big-wave surfers of the time—Laird, Darrick Doerner, and Dave Kalama, among others—Maria was “out to have fun, and not the girlie kind.” These watermen wanted to catch bigger waves on smaller boards, and Maria was right there with them as they figured out how to use foot straps and get pulled onto a wave by a Zodiac. They started on O‘ahu, then brought the concept to Maui’s Pe‘ahi, and Maria became the first woman and first Brazilian to tow-surf that formidable wave. “There were other girls later,” Maria says, but for Maria and Andrea, who first teamed up to tow-surf Jaws in the winter of 2004-2005, “it’s not just like, go with a cute guy and surf it,” says Andrea.

In 1995, after Maria  gave birth to a daughter, Izabela, she decided it was too risky to ride the same huge winter swells as Laird. They were no longer together, and Maria needed to make sure she was healthy and could take care of their daughter, so she “took off from surfing the big waves.” Eight years later, it was time to go back. She had noticed Andrea, whom she knew as a fellow Brazilian and waterwoman, surfing in conditions others wouldn’t touch, and when a jet ski came up for sale, Maria called Andrea, saying she needed someone to partner with, a girl. “Okay,” Andrea said. “How much?”

Andrea, 10 years Maria’s junior, finished high school at 16 and went to San Diego to learn English as an exchange student. A natural competitor, she had won many swim meets in high school. She came to Maui in 1998 to windsurf in the Maui Nationals; like Maria, she found the place irresistible. “I am who I am because of how I grew up,” Andrea says, “but Hawai‘i is 100 times more extreme [than Brazil]—40-knot winds, 30-foot waves.” Her parents said she could stay as long as she continued her education, but formal education eventually gave way to the compelling lessons of the sea.

In 2000 she met her husband, Yves Bouwens; in 2003 they had a daughter, Keala. Andrea found that, when it came to family, she had plenty of support—but the guys didn’t much want to help her in her aspiration to surf bigger and bigger waves. So she and Maria bought the ski together, learning everything about it from maintaining the engine to driving it to towing in another surfer—each other.

“The work and prep for Pe‘ahi is my biggest achievement,” Maria says. “Not because we surfed the wave but because we did all the prep ourselves. We also went against everybody’s beliefs.”

“We’re girls. We’re stretching their limits, too,” Andrea adds, speaking not of the pioneers but of “the boys” following in their wake. “They feel they have to break their limits because we have.”

As we await the winter swells that will cause Jaws to roar once again, “the girls” continue making their own waves. After surviving the channel crossing in a one-man canoe with no escort boat, Andrea was the women’s champion of the Maui International Paddleboard Race in July. A week later, she and Maria, for the second year running, were the only women’s team to stand-up paddle the Quiksilver Moloka‘i-to-O‘ahu Paddleboard Race.

And how do these two leading athletes celebrate their achievements? They go off to their separate homes and cook dinner for their daughters. “You can still have a regular life,” says Maria. “You can be a mother, and still go after the dream that’s inside you.” Beyond the satisfying sense of challenges met and accomplishments made, what drives these two waterwomen is this: They want other women to know that you can push past personal and societal obstacles and honor the woman who lives at your core.