Compared to most other animals in the kingdom, snails receive scant love. Humans tend to frown on slitherers, and snails not only slither, they leave trails of mucus in their wake. Sometimes they nibble on prize-winning plants. But high up in the mist-shrouded Hawaiian mountains live tiny endemic snails of a special class. Sporting beautiful shells in every shade of the rainbow, these wee creatures are worthy of our attention.

Norine Yeung and Kenneth Hayes have devoted the last decade to studying snails in Hawai‘i. The malacologists teamed up while in grad school at the University of Hawai‘i. In 2004 they began scouring forest reserves and nurseries for foreign mollusks: invasive pests such as the giant African snail and rosy wolf snail. They collected plenty of these — but also stumbled across other species that looked suspiciously native: shy little squishes with shells shaped like cone hats or whorled discs.

“We kept finding snails that we didn’t recognize,” says Yeung. “Since we’d been told that 90 percent of the native snail fauna was extinct, we were surprised.”

Switching their focus from foreign to local, Yeung and Hayes sought answers to questions that hadn’t been asked for decades: How many native terrestrial snail species remain in the Islands? What are their relationships? What can be done to preserve them? 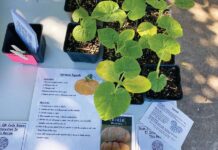