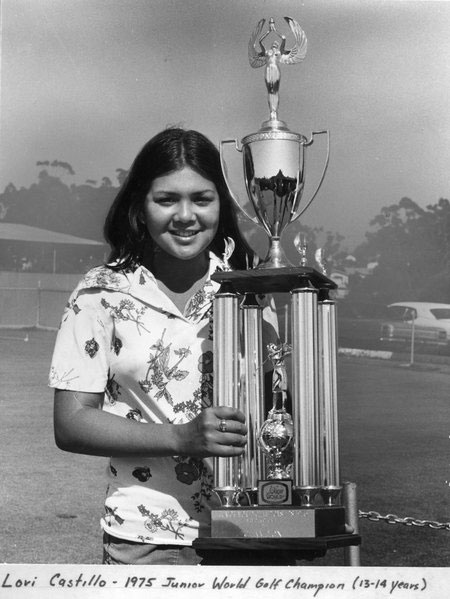 It’s a toss-up whether nature or nurture gave Lori Castillo her winning edge. Competitive golf is clearly in her genes; the Castillo family is an institution in Hawai‘i’s golfing world. The lone girl amongst four brothers—all who play golf professionally—Lori is the most accomplished competitor of the bunch. She’s the only Hawai‘i golfer to win three USGA national championships, and one of only four golfers ever to hold two USGA titles simultaneously. To cap it off, this year Lori Castillo had the honor of following her father, Ron Castillo Sr., into Hawai‘i’s Golf Hall of Fame.

“We were a sport-minded family,” says Castillo, recalling her formative years on O‘ahu.

“You got your homework done and you went to the field and played something—football, baseball, and basketball. There were five of us, so we had our own team.”

Initially, golf wasn’t her game of choice—she preferred team sports—but, like many younger siblings, she resented being left at home while her older brother golfed. She asked Dad, then an assistant golf pro at Fort Shafter, to teach her to play. That just about sealed her destiny. “In our family,” she says, “once you start something you have to finish it.”

For Lori Castillo, “finishing” meant rising to the top of the sport, capturing championship titles, and competing internationally.

“I played my first round golf in a competition,” she says. “I remember asking my dad the night before how you scored.” The plucky pre-teen shot at least double par, but since no other girls had played, she won. “I got my name in the paper and a box of Top-Flite golf balls. I was hooked.”

While Castillo’s father could hire his sons to caddie and retrieve balls at Fort Shafter’s military course, “Having a girl out there would have drawn too much attention,” she says, “so my dad sent me to Bay View [Golf Park in Kane‘ohe] for lessons.”

That didn’t stop her from leaving them in the sand trap.

At Bay View, Ted Murata taught junior golfers on Saturday mornings for charity—a dollar for a bucket of balls and a dollar for the lesson. Castillo got a late start at eleven-and-a-half years of age—most juniors started swinging clubs when they were around eight years old. That didn’t stop her from quickly leaving them in the sand trap.

When Castillo turned thirteen, her mentors thought she was ready to graduate from community golf courses to regulation courses. Again, she dove in headfirst, playing her first round in a tournament. “I shot a horrendous score—133,” she remembers. “I was really disappointed.” She was near tears when the Junior Golf Association president took her aside. “He told me to just try to improve a little bit every week,” she says. “The next week I improved by ten shots. By the end of the summer I was shooting in the low eighties. That’s a lot of strokes.”

Slowly she cultivated the determination necessary to win.

“One thing I was gifted with is the ability to really focus,” says Castillo. “I just play one shot at a time, without thinking about what it all means.” Her technique paid off when she accompanied her brothers to San Diego for the 1974 Junior World Championship. “I went out and doggone won it,” she laughs. “What a shock.”

Four years later, Castillo was crowned the USGA Junior Girls Champion. During her reign, she also won the 1979 USGA Women’s Amateur Public Links—a more prestigious contest, against all ages. She snagged that title again the next year and represented the U.S. in Wales, at the Curtis Cup—golf’s closest approximation of the Olympics.

Castillo attended two of the nation’s top golf universities, Tulsa and Stanford, on golf scholarships. She graduated from Stanford with a communications degree and All-American Honorable Mention.

After school, she toured Europe and Asia as a pro golfer, worked as teaching professional like her father, and continued to win tournaments until sustaining injuries. Today, she’s a busy Maui realtor and has chosen to return to amateur status, which allows her to play in local competitions. She serves on the board of directors for the Hawai‘i State Junior Golf Association, supervising young golfers who hope to follow in her footsteps. Giving back to the sport that has given her so much is important to her.

“Lori is successful at everything she does,” says her father. “I think if I had five Loris and formed a company, I’d be a millionaire. She’s meticulous. She crosses all the t’s and dots all the i’s. She doesn’t skip any of the steps. It doesn’t come easy for her; she just works harder than most people.”

So many people in her life deserved thanks, she found it difficult to limit her acceptance speech at the Hall of Fame induction ceremony. Above all, however, she’s grateful to “my dad for always being there with guidance in the game, my mom for her discipline, and my brothers for not letting me act like a girl.”

“Golf has taught me so much of what I needed to know,” she says. “If I could run my life the way I play golf, I’d be dangerous.”