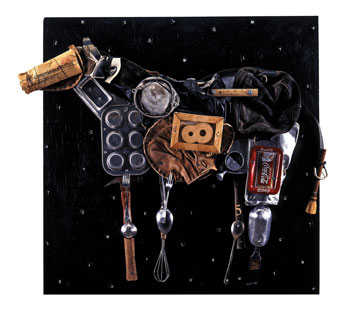 My drive to and from work each day loops past a Kahului fence made of old windsurf boards planted tail-first into the ground.

It’s not the first of its kind, even on Maui. A far grander surfboard fence in Ha‘iku has become a tourist attraction complete with souvenir art and logo wear. There must be hundreds of similar fences in surf meccas worldwide.

But be they humble or grand, all such structures bespeak a basic human instinct: the primal urge to give discarded junk a creative reincarnation as art.

In big-city academic circles, this school is called “recycled,” “commodified” or “found object” art. Here on Maui, it’s usually just a case of somebody with too many old surfboards.

Nonetheless, whenever I pass the Kahului surfboard fence, I pay homage to its spiritual forebear, the famous “Cadillac Ranch” installation in Amarillo, Texas. Created in 1974, that work planted several vintage Cadillacs into the sagebrush at identical angles.

Seen from afar, the Cadillacs seem to be diving into the earth like contestants in some bizarre synchronized tunneling event. With their absurd tailfins sticking up into the desert air, they look . . . well, absurd.

This is fitting, since the recycled-art movement had its genesis in absurdity. A century ago in Europe, a coterie of cheeky pranksters set out to ridicule the stuffy neo-classical art scene of their day. They called their movement “Dada.”

At their vanguard was the French artist Marcel Duchamp, who stood a bike wheel and its forks on end in 1913 to create Bicycle Wheel, the world’s first piece of “readymade” or “found” art. He also famously added a moustache to the Mona Lisa.

Duchamp shocked the conventional art world in 1917 by turning a ceramic urinal on its side, signing it “R. Mutt” and submitting it to a major New York exhibition under the title Fountain. The piece was rejected, but readymade art caught on.

The components of another famous readymade caught the eye of Spanish artist Pablo Picasso in a Parisian bicycle shop. Spotting a leather seat and rusty handlebars, Picasso combined them to create Bull’s Head. Now priceless, it hangs in the Picasso Museum in Paris. It’s one of those pieces that make laymen lament: “I could have made that . . . if I’d only thought of it.”

Here on Maui, videographer Tom Sewell has kept the readymade tradition alive in his work. When the Pa‘ia sugar mill closed, Sewell acquired several huge gear wheels and turbine shafts and installed them, Cadillac Ranch-style, near his East Maui studio.
Other Maui artists work with smaller found objects. Ben Kikuyama fashioned a string of statuesque horses from materials as diverse as solar panels, shredded tires, piano keys and discarded kitchenware. As many of the materials were headed for the dump, he calls these works “trash art.”

“The idea that we can take items we look at as trash and turn them into something useable is intriguing,” Kikuyama muses. “That may be part of the key to finding solutions to the serious environmental issues we are dealing with as a society.”

Entertainment will include the Junk Band, whose drummer plays a kit of recycled plastic tubs and buckets.