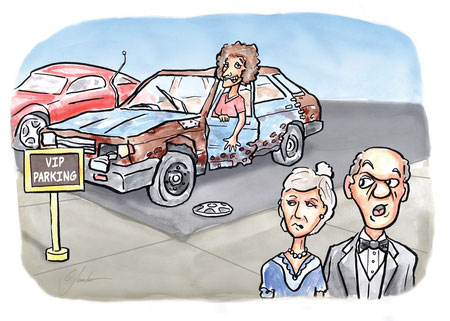 I’ve begun to suspect you can take the concept of reduced consumption too far. For years I drove around Maui in a Nissan Sentra so decrepit, wide-eyed kids would ask me whether the line of rust holes running across the hood had been made by machine-gun fire. When the frame rusted so badly that body shops refused to do repairs, my ex and my brother welded on lawnmower blades to give the doors something to hang onto.

One day, when I parked near the auto shop at Maui Community College, an instructor walked up, gave my jalopy the once-over, and said, “Lady, we can help you.” Turned out his students had a Sentra the same year as mine, with a pristine body but a shot transmission. My tranny being original—and still working—I asked whether he couldn’t just plop it into the other car and trade me that one. Alas, no. That’s how my brown Nissan ended up with blue doors, blue hood, blue hatch and blue gas-cap cover.

By the time even the men in my life would have nothing more to do with my Sentra, I’d logged 247,000 miles. Despite my regimen of benign neglect, that spunky clunker didn’t quit—though she drew so many scornful looks, I’d park blocks away from any tony event I had to attend. When people asked why I kept her, I’d say I was waiting for the odometer to hit 238,857 miles, the distance from Earth to the moon. Once I got there, I told people I had to hold onto her long enough to get back.

The luster finally faded when rolling up the windows no longer kept the rain from pouring in. My Nissan spent her last days—and I suspect “days” were all she had—as a beater for surfers in town for winter swells.

Back then, I couldn’t afford a new vehicle anyway, so holding onto the old car had been as much necessity as quirky obsession.

DNA was the other reason I kept that car so long. I didn’t want to sabotage the American automobile industry.

I’m genetically predisposed. Mom owned three cars in her life: Crosley, Corvair and Studebaker. I bought a Bridgestone motorcycle two months before the company stopped making them, then chose my first car: a Chevette. I refer to that penchant for buying the soon-to-be-obsolete as “Nettie Goldman’s Timing,” a hereditary trait that exists only on the double-X chromosomes in our family. If I wanted the Big Three to survive, I needed to avoid purchasing their cars.  And for as long as I drove that Nissan, Detroit did just fine. Now that my Sentra is history, GM and Chrysler aren’t looking so mint-condition, either.

Or maybe Mom and I were ahead of our time. I recently attended a meeting of South Maui Sustainability, a grass-roots group that’s working to save, if not the whole planet, at least the immediate neighborhood. The evening featured a talk by Mark Fenton, host of the PBS series America’s Walking. Fenton travels the country, talking to local governments, civic planners and the public on the need to create communities as friendly toward pedestrians, bicyclists and transit riders as they are toward the automobile. He goes so far as to link our declining health to badly designed communities that discourage us from walking, our kids from playing outdoors.

Maui is still rural enough to avoid the mistakes the mainland has made—if we take action now and support planners and developers who put people before cars. Me? I figure getting that old Nissan to the moon was a good start.

Want to learn more about designing and retrofitting communities to support healthy lifestyles and a healthy environment? Mark Fenton recommends these websites: For info on building walkable and bicycle-friendly neighborhoods, plus a library of innovative designs, go to pedbikeinfo.org. For info on creating communities that encourage physical activity as a part of daily life, visit activelivingbydesign.com. And get advice from Fenton’s TV series at pbs.org/americaswalking.