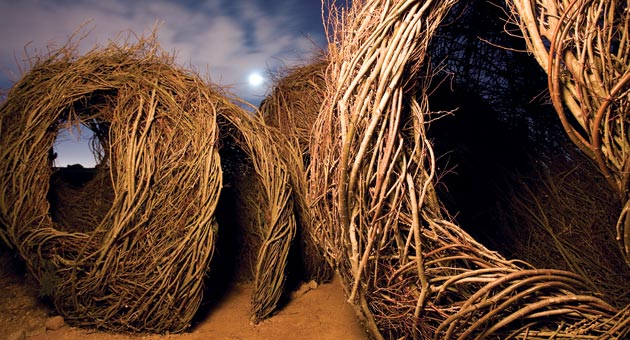 They look like nests for colossal bird gods. Or giant whirlwinds of twigs captured in a  living moment. When one of these sculptural tangles arose last year at the Brooklyn Botanic Garden, a writer described its stick-walled chambers as “lairs for wayward adults and feral children.”

Each is unique and requires a month’s time to construct, along with a couple hundred volunteers, and the equivalent of a tractor-trailer load of wild sticks. Oh, and sculptor Patrick Dougherty.

Says Dougherty: “My job is to make a compelling work which stirs the viewer up, excites the imagination, and  causes passersby to come running.”

Come this fall, Maui will have one. Nobody, not even Mr. Dougherty, yet knows what it will look like, but we do know where it will be—Hui No‘eau Visual Arts Center in Makawao, on a patch of lawn directly before the entrance to the Hui’s headquarters, the beautiful old estate home known as Kaluanui.

According to the artist, it will likely be “twenty feet tall. Might have a few elements. It’d be great if people can walk in and through it.” He speaks with a relaxed slide in his voice, a Southern dip acquired in his Oklahoma birthplace and his longtime North Carolina home. He’s easy to talk with, and talking—building community—is a big part of the stick-sculpture installation process. “There’s always time for conversation,” he told me. “That takes the sting out of it.” And there is a “sting” to twisting a hill-sized pile of saplings and sticks into full-blown fantasy architecture. That’s not the kind of task  typically undertaken by a hermit.

Moreover, Patrick Dougherty knows the exact kind of stick he’ll be twisting, and this is a new one for him. Working at the rate of nine or ten a year, he has created over two hundred of these installations at sites across the U.S. and in Europe and Asia. Usually he works with willow, maple, elm, or dogwood. In Japan he experimented with bamboo and reeds. But here on Maui he will work solely with sticks cut from waiawï, or strawberry guava.

And Patrick Dougherty likes the sticks. “It’s a tough plant but really flexible. It has a lot of resistance. And I love the color.” This toughness means that the Hui’s sculpture will probably last longer than most stickwork installations.

Yes, stickwork monuments are all temporary. Says the artist: “With branches and saplings the line between trash and treasure is very thin, and the sculptures, like the sticks they are made from, begin to fade after two years.” He adds, “I believe that a sculpture, like a good flowerbed, has its season.”

This idea that significant art can be both social and temporary (unlike, say, Michelangelo’s David, which is both a work of solitary genius and—compared with a human lifespan—“eternal”) isn’t exactly new. For example, forty years ago the artist Christo completed a four-year project that resulted in Running Fence, a temporary installation north of San Francisco that sliced through the private properties of fifty-nine ranchers, interacted with towns and roads, and engaged city councils, granges, and three sessions of California superior courts. After one particularly punishing grange meeting, a reporter asked the artist, “What now, Mr. Christo? Do you still think your project is going to happen?” (I’m paraphrasing now.)

“What do you mean?” he said. “It’s already happening. This is the project. All these people are thinking and talking about art. The project is a success even if the fence never goes up.”

Something similar will happen with Patrick Dougherty’s stickwork bird-god-nest. With this singular difference.

Says the artist: “Sticks were mankind’s first building material, and even the modern person continues to have a deep affinity for how to use them.” That’s how he explains the haunting attractiveness of these installations. They stimulate ideas about the nature of art, “impermanence and life cycles,” and humanity’s deep kinship with the wilderness. “People imagine for a moment walking away from the geometry of the city dweller and fading back into the forest for a day.”

In the unique case of Hui No‘eau’s installation, the twigs  themselves are symbolic. The fact that Dougherty and volunteers will be cutting heaps of waiawi out of the wilderness is intended as a call to action on behalf of Hawai‘i’s natural environment.

The message is this: We must fight to save our forests.

Waiawi is a common sight in our lower-elevation wilderness areas. Its bark is attractive, its cherry-like fruits tangy. People don’t always know—or like to admit—that it’s a botanical cancer. Birds and pigs scatter its seeds everywhere. Free from any natural checks, the seedlings grow into what botanists call “dense monotypic stands.” In other words, they bully everything else out of existence. Strawberry guava isn’t the only invasive pest in our forests, but it makes an excellent emblem for the whole mess of them. Construction of the sculpture will clear an immense pile of these invasive weeds. Dougherty and his hosts at Hui No‘eau also hope that it will rally community enthusiasm for the even more immense challenge of environmental preservation.

Dougherty came out in early January for a preliminary site visit. He wandered the Hui’s parklike grounds, considered the remains of an old sugar mill as an atmospheric but rather remote spot for sculptural interaction, then opted for the little lawn that sits front-and-center. He wants to get “a parade of people, anyone who comes on the property.”

While on Maui he met with people from various agencies and groups that are working in wilderness preservation. “They put me in their trucks and drove me around. They were full of information. You have incredible forests in Hawai‘i. I hope to bring all that to bear in the vision of the piece.”

He told me this in a recent phone interview from Richmond, Virginia, where he was working in relentless spring rain to construct “a group of diamond forms slammed together, [looking] almost like a piece of cloth.” Previous to this one, he fabricated a stick design “based on serpentine Indian mounds that . . . wandered all over the site.”

Each stickwork construction is an intuitive and gradual reaction to its setting. “Initially I make word associations with the site and then develop a series of thumbnail sketches. These are not line-by-line renderings, and during the building process I often have to read into these loose sketches, saying to myself: ‘Oh, I must have meant this.’  One big advantage of working on-site, one line at a time, is the ability to adjust the scale of the work. As I come to know the site and take its full measure, I constantly adjust the work to fit any new revelation.”

Dougherty fits the sculpture not only to its physical place but also to its human community. This community starts with the volunteer team, whose work is meant to be fun. (“One of the most basic components for a sculptor in my circumstances is a good sense of humor,” says Dougherty.) It includes all the curious folks who stop by to ask, “What the heck?” Many of those, says the artist, go right home to change into work clothes and come back to wrangle the tangle.

So be sure to stop by this September. You might decide to stick around.

To learn more, especially about other ways to support this ambitious project, go to www.kickstarter.com/projects/hui/hoololi-the-environmental-art-garden.