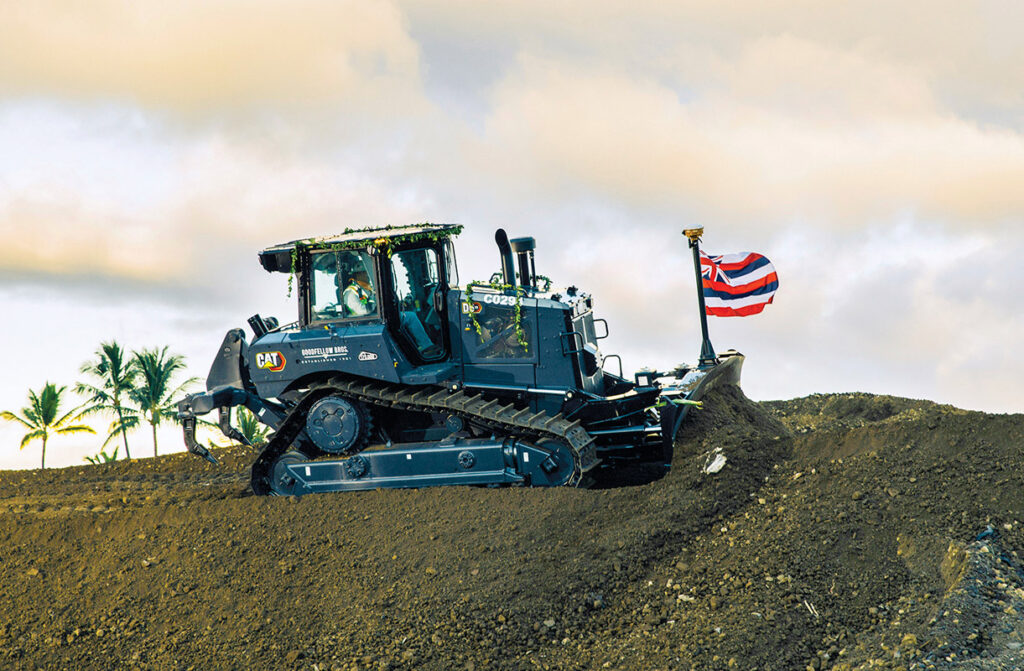 Goodfellow Brothers, one of Maui’s long-standing general contracting businesses, is the proud owner of a new hybrid bulldozer from Caterpillar. “The black-and-gray D6 XE we have is the commemorative edition celebrating Caterpillar’s having built 175,000 dozers,” says Shepherd Nelson, equipment superintendent for Goodfellow Brothers.

The D6 XE is the world’s first electric-drive dozer. “Instead of powering a torque converter, the [diesel] engine drives a generator which turns the mechanical engine power into electricity,” says Shepherd. “This electric generator runs the tracks, the blade and the hydraulics.”

The dozer has no gears to shift and provides maximum torque at all speeds, delivering constant power to the ground. It is estimated to move 10 percent more material per hour for increased productivity, and has 35 percent better fuel efficiency than a traditional combustion engine. “The generator runs at one consistent, low RPM, so it is really efficient,” says Shepherd. “And electric motors achieve 100 percent of the torque and power at zero RPM, whereas a regular combustion engine needs to rev up to get into its power band. This means that the second you turn over an electric motor, it has full power.”

It’s also more eco-friendly than a traditional dozer. “When a traditional dozer is pushing dirt at full load you can see black smoke coming out of the exhaust,” says Shepherd. “The D6 XE is super quiet, with no smoke and no change in sound no matter what you’re doing.”

The machine is a little more expensive, but Shepherd says they would still love to add more to their fleet. “Because it’s [35 percent] more fuel-efficient, over the lifetime of the machine it pays [for itself],” he says.