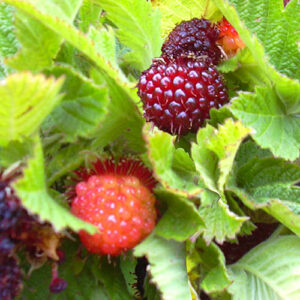 In ancient Hawai‘i, before humans introduced grazing mammals, native plants didn’t need thorns or poisonous sap to protect themselves from opportunistic munchers. Nor was there any evolutionary reason to develop fleshy fruits to lure animals into spreading their seeds. As a result, few native Hawaiian plants are edible and even fewer have thorns. ‘Akala, the native Hawaiian raspberry, is an exception. It sports both large, tasty fruits and prickly stems—though the vestigial thorns are comparatively wimpy.

Why does ‘akala have fruit and thorns at all? Some theorize that the thorns may have been protection against the mysterious moa-nalu, an extinct flightless duck that grew up to four feet tall. Did flocks of massive ducks nibble on the plump berries? We may never know.

Summer is a good time to see this fairly common native in full foliage; in winter ‘akala sheds its leaves. Tall, straight, light-brown canes distinguish it from nonnative raspberry or blackberry plants—which have rambling, whitish or green canes and are far more aggressive. The native berries range from dark red to yellow and are tart and juicy. They are much larger than a typical black or raspberry, but not as sweet. In the past, Hawaiians used vibrant ‘akala berry juice to dye kapa (barkcloth). Today the fruits are used in jams and pies.

‘Akala is one of the native plants bringing life back to Poli Poli forest after last January’s devastating fire. You can also find stands of ‘akala in the Makawao Forest Reserve, Haleakal¯a National Park at Hosmer’s Grove and the Paliku cabin, and at Kahanu Gardens in Hana. Visit the Maui Nui Botanical Gardens in Central Maui to learn more about ‘akala, along with many other plants traditionally incorporated in kapa dyeing.