Between 1985 and 1987, the Society sailed Hokule‘a surely and steadily around the islands of the Pacific and back to Hawai‘i, putting to rest finally and forever the idea that the movement of Polynesians around the Pacific was anything less than masterful and deliberate. In so doing, they resurrected a dormant and wounded Hawaiian pride and brought about a cultural renaissance that continues to flower in every corner of the Polynesian Triangle.

“Western mariners use the magnetic compass to set direction,” says Baybayan. “The needle identifies magnetic north. We use the rising and setting of celestial bodies, and then the direction of the waves and the wind to help orient the compass. The winds are changeable, but they shift gradually.” During journeys, he says, “We divide the days into sunrise and sunset. At sunrise we have a navigation meeting, assess our position and compare that to the last twelve hours, and add that to the past days. Throughout the day you’re watching the speed of the canoe, averaging out speed and plotting position. At night you use the stars to reconfirm or update your position.”

At sea, “It’s eating/sleeping/working in four-hour shifts. It can be very romantic at night under the stars,” says Baybayan. “Exhausting, too. In the tropics, you have to keep fighting the squalls; you have to shut down the sails in squall winds, then open them back up and reset them, and then the next squall comes.”

Nainoa Thompson was the first contemporary Hawaiian to master the Polynesian art of navigation, but schooled himself in Western academics before learning from Mau. Only when he was anchored in the hard sciences did Thompson shift his attention to absorbing the more subtle but powerful older ways of navigating. 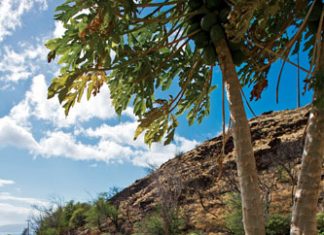 This West Maui valley witnessed some of the island's most turbulent history. Now it's helping to redeem the past.