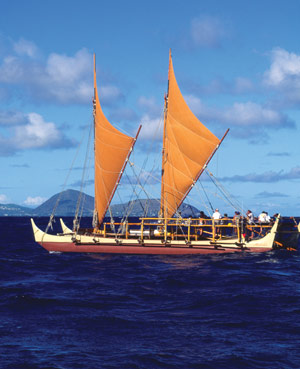 Thousands of years before Europeans began their first tentative ventures beyond coastal waters, Polynesians were exploring the vast Pacific. They settled the islands of Tonga, Fiji and Samoa, and along the way, engineered some of the finest open-ocean sailing vessels ever seen. Aboard double-hulled voyaging canoes, Polynesians arrived in Hawai‘i, becoming farmers and fishers, warriors and kings — a people descended from what current-day navigator and Hawaiian son Nainoa Thompson calls “the astronauts of our ancestors, the greatest explorers on the face of the earth.”

Unlike the single-hulled ships of Europe, the Polynesian double-hulled canoe was light and fast. It ranged in length from 50 to 100 feet, with twin hulls that were each carefully hollowed and shaped from a single log, connected by a deck with one or more masts for the sails. People and provisions could be sheltered in the hulls for long journeys. Food swam all around in the sea. And the weather, if benevolent, added to water stores.

These explorers had no tools for wayfinding but their minds — no sextant or magnetic compass, no GPS.  Instead, they watched celestial bodies in the night sky, listened to the winds, felt the swells slap against, and move under, the wooden hulls.  The flight of seabirds, behavior of clouds, patterns in the ocean and in the air informed their sense of where land might be. They lived off the ocean the way farmers live off the land, in tune with everything around them, embedded in the pulse of the sea and the sky. A sky that, at night, gave them the star compass.

“The tradition of the oceanic star compass extends from Micronesia to Saudi Arabia, between the same [tropical] latitudes,” says Chad Kalepa Baybayan, navigator in residence at the ‘Imiloa Astronomy Center in Hilo. “No telling if it’s one system that diffused [throughout the South Pacific] or if everyone figured it out on their own, but the use of the same stars makes me think the former.”

The colonization of the Pacific in the 1700s by Europeans in their single-hulled ships was so swift and total that the art and science of traditional Polynesian migration were obliterated in the Polynesian Triangle — that vast area bounded by Rapa Nui (Easter Island) in the east, Hawai‘i in the north, and Aotearoa (New Zealand) in the south — in just a few generations. The decline was so dramatic that theorists began to deny that deliberate Pacific navigation by the ancients had ever been possible.

In the 1970s, in response to theories that the Pacific Islands had been settled by accident or a stroke of luck, the Polynesian Voyaging Society of Hawai‘i built a sixty-foot voyaging canoe, a hybrid of natural and modern materials. They named the vessel Hokule‘a (“Star of Gladness,” a reference to Arcturus, the brightest star in the Northern Hemisphere and the guiding star for Hawaiian navigators). With the help of one of the last traditional Polynesian navigators in the world, a man from Satawal named Mau Piailug, they sailed Hokule‘a to Tahiti and back in triumph in 1976.

Four years later, mentored by Mau, the Society did it again. Chad Baybayan was aboard.

“When I sailed in 1980 it was like stepping back in a time machine,” he recalls. “The black silhouette of a crab-claw sail against the starry backdrop . . . at that moment you are as close to your ancestors as possible — the same stars, same shape of the sails, the rise and fall of the canoe, the wind in your face, the chill of the night air. It is incredibly romantic and dynamic, metaphorical and poetic.

“You always sense that there’s a presence out there with you; at least I do, and I live and I work in the shadow of my ancestors. But I’m not focused on it. I’m very attentive to the situation at hand, and I make decisions based upon my instinct. Experience becomes memory and memory becomes instinct.”