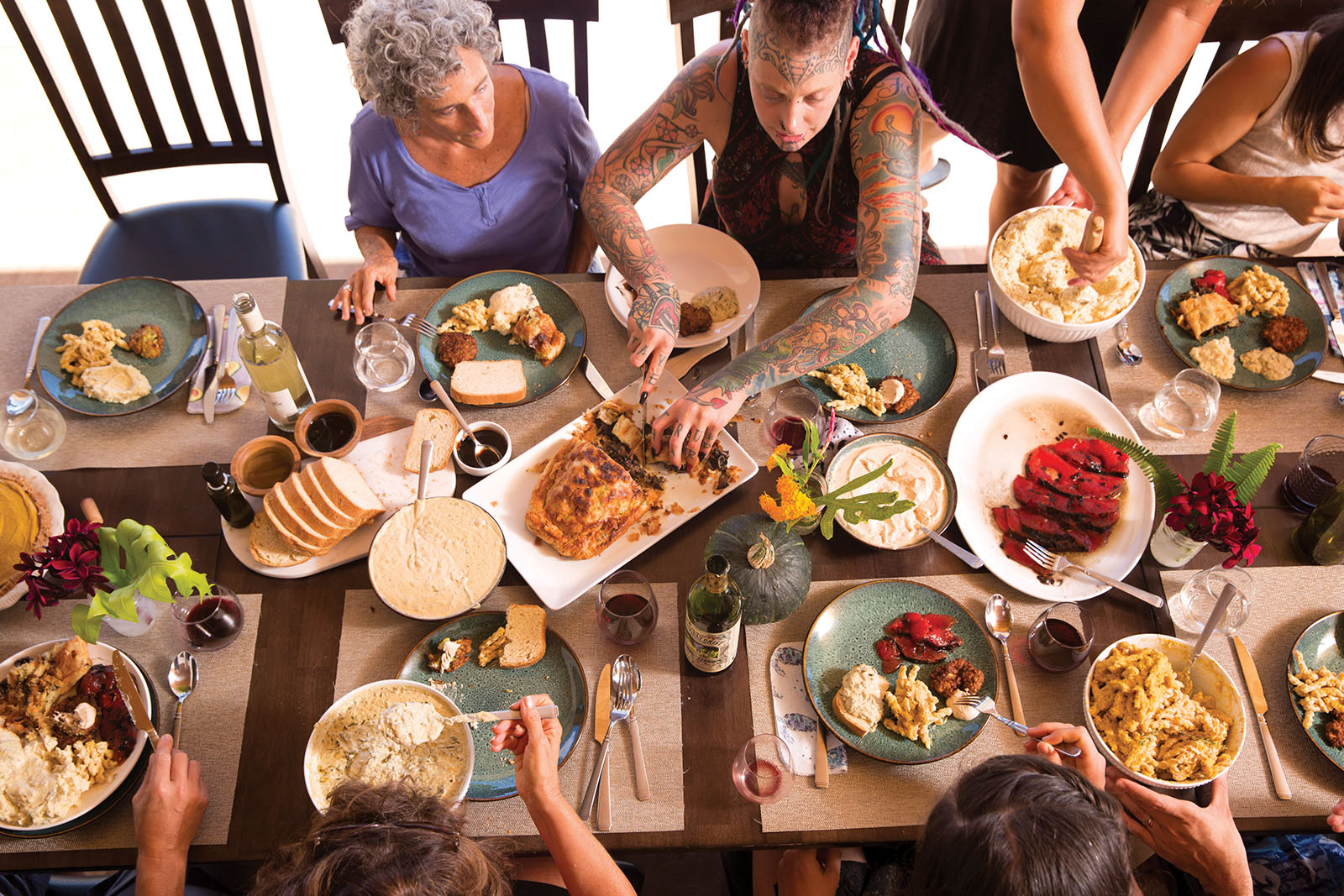 Every year, MNKO invites an award-winning chef to direct our staff in a holiday test kitchen and share the recipes as a gift to our readers. It’s a gift to us, too—the opportunity to learn from a pro and feast on the results. We’ve conducted this tradition for the better part of a decade, but this time we’re trying something new.

“I’d like to suggest a vegan test kitchen,” says Michael Haynes, MNKO’s vice-president of operations. He explains that Kathryn, his lovely wife, is mostly vegan. “It would be great to have a few special dishes that she could make and bring to a party.”

A light bulb goes on in my head: Moku Roots, winner of three 2019 ‘Aipono Awards, including Silver for Best New Restaurant and Best Farm-to-table Cuisine. When I mention the name, a giant smile lights up Mike’s face. “It’s our favorite restaurant in Lahaina!” Done and done.

Two weeks later we arrive at the Launiupoko home of Alexa Caskey, co-owner, with Erica Gale, of Moku Roots. “Welcome, aunty. Hi, brother,” says Chef Nick Stowell as we enter the open kitchen where we’ll assist (a little) and learn (a lot) about vegan food and nutrition from these three knowledgeable women. Chef Nick says, “We will be making lū‘au dip, smoked watermelon ‘ham,’ mac and cheese, mashed potatoes and gravy, broccoli fritters and mushroom Wellington. How many of you have eaten beef Wellington?” We all raise our hands Chef Nick says, “Well, this will be a mushroom-filled Wellington.”

Rita Goldman, MNKO’s senior editor and hopelessly bad cook, observes the menu’s lack of animal products, and asks, “What about protein?” Chef Nick gives Rita the confident look of one who knows nutrition; before moving to Maui, she worked as a vegan chef at Fred Hutch Cancer Research Center in Seattle. “Trust me,” she says. “There is plenty of protein in mushrooms.”

“Mushrooms are good for your brain, too,” publisher Diane Woodburn pipes in. “They are? Let me at ’em!” says Rita.

Chef Nick explains, “When we’re [reinterpreting] a dish from a meat protein to plant-based, it’s not the protein itself, but the flavor that leads the palate. It’s the combination of spices, fresh herbs, and how the vegetable is processed.”

Lehia Apana, our managing editor, asks, “Since you use so much local produce, how much of the menu is set? “It’s supply and demand,” Erica replies, “and whatever seasonal ingredients come in our back door from our local backyard growers.” Chef Nick says, “Since I’m [relatively] new to the island, there are many ingredients that I’ve never seen before. I take it all. I don’t know what it is, but I’ll use it in a special dish or sauce.”