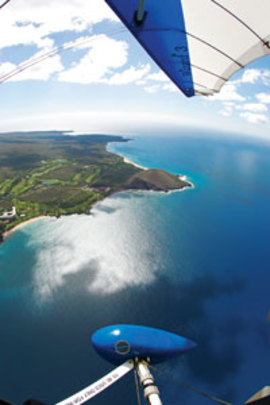 “Fears are paper tigers. You can do anything you decide to do.’’ –Amelia Earhart

At the end of the grass runway sits a white tent hangar. The large flaps peel open to reveal two flying machines—throwbacks to the pioneers of aviation and the barnstorming days of old. They’re ultralights: simple contraptions of wire and wing outfitted with engines. Flight suits hang in the corner. Beyond the runway is today’s playground: 3,000 feet of vertical airspace descending Haleakala’s broad western flank to the sea.

Ultralight pilot and instructor Dwight Mounts hands me a helmet and wheels the two-seater out onto the grass. We pose by our triangular flying steed while his wife, Julenne, snaps our photo. This is my first venture up in an ultralight. I feel very tough, cradling my helmet like Amelia Earhart on a record-breaking mission. I climb into a tiny seat behind the pilot. Mounts tests our radio headsets and engages the engine. We bounce down the short runway, past Julenne waving us on, and ascend.

Staring down at the treetops dropping away beneath us, I’m amazed that escaping gravity is so easy. I half expected the earth to clutch at us, to refuse to let us go without a fight. Airplanes roar when they take off; we simply lift into the air. We head out over rustling eucalyptus trees and slow-moving cattle.

As we cruise towards ‘Ulupalakua, I pick out the silvery branches of native koa and deep green ferns in the gulches. The high-altitude air chills me even through my flight suit. We ascend the “spine,” a particularly sharp ledge running up from Kanaio to Science City at the summit of Haleakala. Clouds buffet the top of the spine, preventing us from traveling too high. 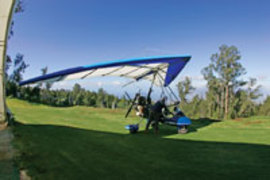 Mounts says many of his clients come to him to conquer their acrophobia, or fear of heights. He himself suffers from the opposite affliction, something like a hunger for high places. Even the road leading to his Upper Kula residence is a steep, one-lane hair-raiser. He built the runway with a tractor and some grass seed at the top of the road, where he operates Maluhia Lani flight school. One by one, his white-knuckled students arrive ready to face their fears and soar.

I find the derring-do of these acrophobes inspiring. No rooftops with safety railings for them; they opt to battle their fear in mid-air, where real dangers exist.

Planes do occasionally fall out of the sky. Even the fearless Amelia Earhart vanished attempting to cross the same Pacific sparkling in front of us in her tiny Lockheed Electra. A previous job of mine required helicopter safety training (which included being dunked upside-down in a swimming pool as part of a simulated crash), so I know the risks.
Compared to helicopters or even planes, however, ultralights seem ultra-safe. The aerodynamic wings are built to glide in case the motor should sputter to a stop. And if that fails, a safety parachute is stowed behind me. I feel completely comfortable—despite my frozen toes squished in the tiny nose of the aircraft.

Mounts places my hands on the handlebars and encourages me to steer. I feel the wind’s power coursing across the wings and through my hands—I’m flying! I dip the wing to the left, and we turn. Knowing that I am controlling our movement is intimidating; I quickly hand the steering back to the pilot. I’m suddenly aware that nothing is holding us a few thousand feet up in the air. Despite a century’s worth of aerial history, it’s still miraculous to me that humans can fly.

A hang glider at heart, Mounts switches the motor off to ride the air currents. We drift silently downward, towards the shoreline. Although still popular, hang gliding was the thing in the ‘70s. The precursor to ultralights, hang gliders operate on similar principles, without the engine. Gliders wait for an optimal gust, then ride it down the mountainside. Getting back up is rather more challenging. Mounts says a regular crew of gliding enthusiasts took turns ferrying one another back up the mountain after a flight. “Finding a driver was the perpetual quest. Whenever somebody new came, they usually had a mother or a girlfriend who would drive us.”

Thank goodness for the addition of a motor! Now the exhilaration of gliding is combined with the convenience of driving oneself home. Convenience is secondary to Mounts, who explains the benefit in a flying fanatic’s simple terms: “You’re in the air longer. All the time spent waiting for perfect conditions or driving back after landing is now spent flying.”
Ordinary scenes look fantastic from the air. Streets and neighborhoods appear orderly and sensible—an impression that escapes me on the ground. Patterns are visible; orchards and farm rows are downright beautiful. Running fence lines are stitches in a great big quilt. “Once people are in the air,” Mounts says, “they forget to be afraid.” I can see why; there’s far too much else capturing their attention. 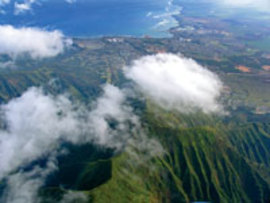 Within minutes, we’re buzzing over Wailea beach. The ultralight’s motor makes it possible to regulate speed and direction; we can hover, spin, and really poke around. I can see fat, golden koi paddling around the chapel pond at the Grand Wailea Resort. Surfers and kayakers bob in the swells rolling to shore. The ocean is a mosaic of blues and turquoise. Brown specks turn into sea turtles as they surface to rest. We hunt for whales. The world takes on a new dimension; I can see down through the water while I travel through the air. It’s as if the earth’s horizontal surface, the thin crust I am normally bound to, is inconsequential.

Mounts tells me about a rare clear day when he and local artist Kit Gentry flew over the usually cloud-locked West Maui Mountains. Captivated by the range’s inaccessible peaks and valleys, Gentry persuaded Mounts to fly time after time until the perfect conditions unfolded beneath them. They were able to explore the hidden land of bogs and waterfalls without touching ground.

Clouds typically are the bugaboo of ultralights. Pilots are equipped with some navigational tools (such as radios and compasses), but they can’t safely travel in clouds. Mounts describes one hairy flight through a sudden patch. “When you fly in clouds you get vertigo,” he says. “I thought for sure I was flying parallel to the horizon. I thought my compass was going haywire; the needle was spinning around and around the dial.” When he emerged from the clouds, he found himself in a spiral dive headed straight for the earth.

Such situations are the reason ultralight pilots are licensed. Despite a 12-year hang gliding career, Mounts took flying lessons from the only ultralight instructor here on Maui. Then he traveled to Phoenix, Arizona, for the Basic Flight Instructor exam. Now he too offers lessons—just 10 and you can fly solo. Why not?

Flight is a routine part of life here in the Pacific. A lot of us got here by plane. Island residents are lucky; not everyone has the opportunity to view their home from the air. Visitors benefit from the bird’s-eye view too—they can decipher our meandering roads and map tomorrow’s course to a beach they missed. Circling above the cane fields and waves, we get a chance to see our island home and ourselves from a different angle—a tidier, loftier angle. If we take Ms. Earhart’s bit of wisdom to heart, life is all in how we see it.

Back on terra firma, when I recall the flight, it’s the few tantalizing seconds when I held the handlebars that stand out. I could have held on longer.

How to Fly:
Call Maluhia Lani at (808) 876-1600 or info@maluhialani.com.
Morning lessons available on Thursdays, Saturdays, and Sundays.
$125 for half-hour flight, $200 for full-hour flight.
To see more aerial photos by Maui artist Kit Gentry, log on to www.kitgentry.com.