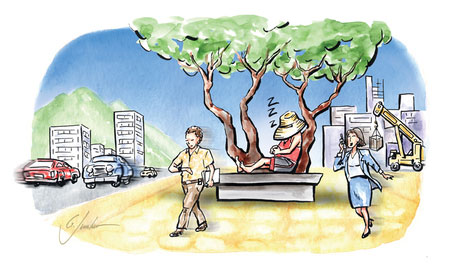 Standing behind this issue’s “bests” and “worsts” is a quieter but equally challenging topic: change.

Change is certainly not unique to Maui, but it does stir outsized debate on this small island. Are the changes good? Do we want more and faster change? Or do we miss the “old days,” when things seemed slower, more gracious?

That’s grossly oversimplified, of course. As this issue makes clear, change creates “bests” and “worsts” alike—and it spins them out with sublime indifference. Change doesn’t care what we think. It just gets up every morning, puts on its hard hat and goes cheerfully back to work.

With few exceptions—the Moloka‘i cruise ship experiment comes to mind—change in Hawai‘i has rarely drawn successful resistance. They may wax nostalgic for the old days, but Islanders have for many decades used their votes and their wallets to endorse new days and new ways.

But change is like pizza. It may be easier to desire than to digest—and once delivered, it can prove sticky. Having ordered up a huge combo pizza of change, Maui faces a separate question: “How do we handle this?”

Put another way, the difference between a “Maui best” and a “Maui worst” can be a simple matter of how change is accommodated. Take the old Kahului Shopping Center. Opened in 1951, it was touted as “the first shopping center west of the Mississippi” and the capstone of Hawai‘i’s first fully planned community.

These firsts aside, what for many years made the center Maui’s “best” was the neighborly atmosphere fostered by its accessibility, its low-rise, courtyard design, and the welcoming shade cast by its stately monkeypod trees.

Outflanked by newer and ever-larger malls, the Kahului Shopping Center was headed for major changes even before a spectacular 2005 fire burned most of it to the ground. But rather than rebuilding an obsolete if beloved mall, the landowner and county planners agreed to develop something new on Maui: a 20-acre “town within a town.”

As with its predecessor, factors like design, traffic flow and accessibility will determine how well this new community works. But its decision to keep the monkeypods could put it on some future “best” list.

That may seem an odd idea. They’re only trees, after all. But as Maui urbanizes, landmark shade trees are among the unsung assets that can help the island glide through change. (The reverse is also true. If there were a “best” Maui airport, most voters would likely pick the bygone version with the big banyan tree and the puka in the roof. )

When they go, the glide gets grittier.

So alongside the “best” and “worst,” I suggest another list: things that help us get through change. I’d start with monkeypods, coastal access and aloha. You?