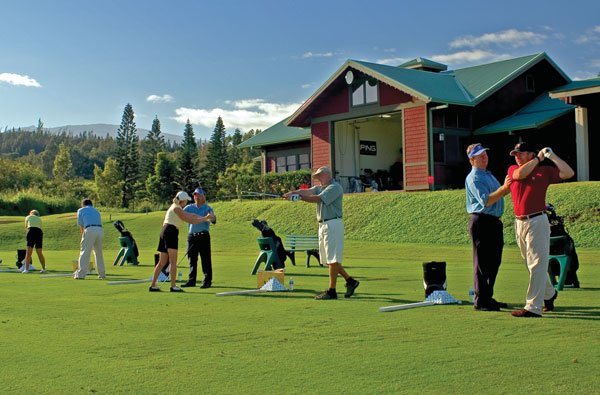 We all figured Frank had the yips with his chips.

The big guy was still hitting the ball 260 yards off the tee and making his share of long putts, but the wheels threatened to fly off every time he tried to hit a little pitching-wedge shot onto a green. He might stub a few balls short, or fly one into a back bunker. You never knew what was going to happen when Frank had the demon wedge in his hands.

As his golf buddies, we learned to pay sharp attention whenever he chipped — for our own safety, as well as the entertainment value. There is nothing like watching an opponent tack two or three needless strokes onto his score to warm the cockles of a golfer’s heart. And there was also the crying out and cursing and gnashing of teeth; we didn’t want to miss any of that, either.

Was it a mental block, a yip with the chips? Or was it a flaw with his swing? Frank packed up his wounded short game and drove out to the Kapalua Golf Academy to take a lesson from Director of Instruction Ben Hongo and find out.

Set on the green slopes overlooking the blue Pacific Ocean, the Academy is the largest teaching facility in the state, with 85,000 square feet of teeing area, a three-hole walking course, indoor and outdoor hitting bays with video analysis, practice greens and even an eighteen-hole putting course. Hongo needed a fraction of that space to fix Frank’s short game, that and a two-by-four board.

The affable Hongo met up with his student on one of the Academy’s short-game teaching areas, just uphill from the 2,500-square-foot learning center. Hongo asked Frank a few questions to gauge what kind of golfer he was, then zeroed in on what he hoped to accomplish during his one-hour lesson. Once he had a feel for Frank’s game, as well as his reason for reaching out for help, he invited him to hit a few balls.

Have you ever taken your rattling car to a mechanic and the darn thing refused to make the noise for the expert? The same can happen with lessons. A golfer has a problem, but put him in front of a teaching pro and the problem temporarily disappears. Thankfully, that didn’t happen to Frank. His miseries were laid wonderfully bare as Hongo watched him stub and “chili-dip” one shot after another.

That is when Hongo got out his two-by-four, snuck up behind Frank, and knocked some sense into him — by placing the board four inches behind his ball. The barrier forced Frank to swing his club differently. From that drill, they moved to a sand trap to briefly work on Frank’s point of impact. Within twenty minutes, the chili-dips were gone and Frank was hitting crisp wedge shots that settled near or in the hole fifty feet away.

It was another success story at the Kapalua Golf Academy, where golfers have been fine-tuning and overhauling their games since it opened in 2000. Designed by Hale Irwin to be one of the centerpieces of the Kapalua golf experience, the twenty-three-acre facility has matured and evolved along with the resort.

The Kapalua brand has always been about quality and classiness, about treating guests in ways that will bring them back year after year. Hongo says that while the customer-service philosophy hasn’t changed much, Troon Golf and new owner T.Y. Management have renewed a commitment to the turf.

“Day in and day out, we have better conditions now,” Hongo says. “There is more focus on it. The golf courses are in really great shape.”

Hongo says Troon beefed up the Academy’s video capabilities and now instructors are able to share more with their students, and even continue to help when those students return home. It’s all about developing friendships, bringing people back.

Hongo covered a lot of instructional ground during his short time with Frank. Before they said goodbye, the award-winning instructor condensed the lesson into three primary swing techniques for his student to remember: 1. Keep weight forward on the front foot from address through contact. 2. Hands should be in front of the ball on impact to hit the ball on the downstroke. 3. Use a longer, flatter backswing with a shorter follow-through.

After his lesson, Frank hit Kapalua’s Bay Course to find out if any of Ben’s insights had stuck. On the first hole, he laid his iron shot to within ten feet of the cup and made his putt for birdie. The wide smile said it all.

“Ben was so successful with my short game, I would highly recommend the Academy to anybody for a tune-up, or to fix a major problem,” Frank said. “It’s a first-class facility that rivals any on Maui, and I have been to all of them. Troon Golf really stepped it up.”