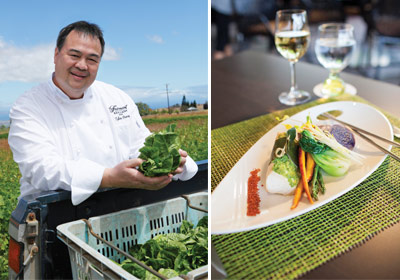 Many of our most lasting impressions involve meals we’ve shared. I can still smell the sweet aroma emanating from my grandma’s kitchen. Her noodle pudding came to the table steaming with the rich, sugary scent of cinnamon; the noodles on top, browned and crispy, provided a perfect counterpoint to the soft, creamy interior where treasures of plumped raisins and fragrant almond slivers awaited excavation by small, sticky fingers. Over half a century later, the sense of warmth and well-being those memories bring remains with me.

“Food in a Chinese family is very important,” he says. “Everyone participates [in its preparation]. When I was a child, my uncle owned a food stall in [Honolulu’s] Chinatown, where we shopped almost daily. I remember the pork hanging on hooks, chickens still clacking in the cages. My grandmother worked in a Chinatown restaurant that made dim sum.” The term “dim sum” encompasses various bite-sized tastes of heaven, such as steamed buns or potstickers filled with sweetened pork, chicken, or shrimp; it translates as “touch the heart.” 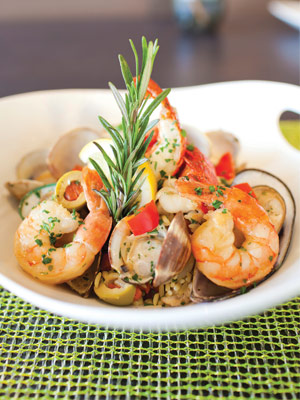 But it’s my olfactory sense that awakens first as Pang presents tonight’s special, fresh catch paired with, you guessed it, dim sum. Aromas of ginger and scallions are borne aloft on the steam rising from potstickers stuffed with sweet lobster. Each dim sum began as a small round of dough that was folded in half over the savory filling. The closed, curved edge has been pleated exactly twelve times. “That is the right way to do it,” Chef states with pride. The lovely pillows are placed pleated side down in a very hot pot and cooked to a deep, golden brown — then turned and steamed. The dim sum arrive on the plate golden side up, showing off the handiwork in each tiny pleat. The style is traditional, but the delicately balanced flavors inside are trademark Chef Pang. Mixed with the lobster are Hamakua mushrooms instead of the usual dried shiitake, and to add crunch, heart of palm replaces the expected water chestnuts. “We choose Tristan lobster because it is a sustainable harvest . . . and amazingly sweet,” says Chef.

“What greater homage to pay our guests,” he adds as I relish the dim sum, “than to share our culture? Trends come and go, but the history of a place is always around you.” 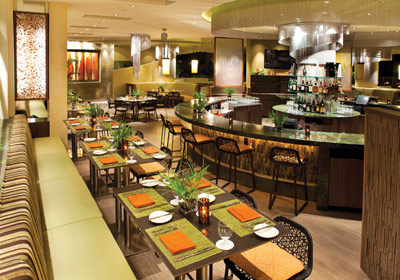 That’s certainly true of Ko Restaurant in the Fairmont Kea Lani, where Chef Pang has developed each dish as a celebration of the Islands’ multicultural heritage. “Ko” is the Hawaiian word for sugar cane — the crop that launched Hawai‘i’s Plantation Era. Beginning around the mid-1800s, Chinese, then Japanese, then Portuguese immigrants arrived in the Islands to meet the labor needs of the plantations. They were followed by workers from Puerto Rico, Korea, Spain and the Philippines . . . eventually an estimated 350,000 immigrants added to Hawai‘i’s native population. Each ethnic group had its own camp, but workers mingled in the fields and mills. The result was less a melting pot than a stew of cultural traditions that influenced one another, while each retained its distinctive flavor.

Knowing that culture, history and traditions are told through the food we share, Chef Pang has elevated that belief to an art, creating a sensory experience of time, place and oh-so-delicious taste. It begins with the restaurant’s ambiance, which “started with Chef’s culinary vision,” says Fairmont Kea Lani’s general manager, Charles Head. Island Design brought the vision to life. Native ‘ohi‘a trees and sugar cane surround the exterior. Inside, linear rows of glass tile suggest the graceful lines of sugar cane, as do the striped cushions in shades of green and brown. Even the placemats are the fresh green of a newly sprouted cane shoot. But my favorite element is the thousands of small, stainless-steel beads hanging in organic, curved curtains that catch the trades and mimic the sound and sparkle of rain. The roof, designed to emulate a hovering cloud, is supported without exterior beams, inviting in the sun and breeze.

Authentic island living also requires sustainable practices — especially when those islands are the most remote landmasses on Earth. For Chef Pang, that translates to fresh ingredients; to be on Pang’s A list for fresh, I learn, it’s not just what you know, but whom.

For example, a fish caught in the Northwestern Hawaiian Islands can be twenty days old by the time it hits the market here. That’s why nearly all the fish at Ko are purchased from local fishermen and guaranteed to have been caught only hours before. “Our sources make sure we get first dibs,” Pang smiles. “No matter what else we have planned, we will put the fresh catch on the menu that night.”

Tonight, it’s ‘opakapaka (pink snapper), “brought in still wet.” Prepared Chinese style, this may be the most delicious fish I’ve ever sunk my teeth into. “My dad’s recipe,” Chef smiles, “steamed with a tiny bit of Chinese sausage, a drizzle of soy sauce, a sizzle of toasted peanut oil,” and finished with fresh ginger, scallions and Chinese parsley. The skin is left on the bottom of the fish to enhance flavor and retain natural oils. The result? Moist and tender, the soft, white meat flakes effortlessly at the touch of my fork. Tiny fireworks of sweet and spicy sausage combine with piquant ginger and scallions in a celebration of flavor. Follow with a chilled glass of Cakebread Cellars chardonnay, but do so at your own risk. It may cause close encounters with the divine.

“There is a special respect for the food that is put on the table when you know where it came from, who grew it, what the chain of events were that brought that product to you. Not everybody knows all of that, but we know it,” Pang says proudly. Then he laughs: “It’s not much different than in ancient time. Then, special food was reserved for the ali‘i [royalty].”

Sustainable, responsible choices are also critical to preserving Hawai‘i’s environment, and are an important component of Ko’s menu. Chef surprises me by saying that includes incorporating introduced plants and animals that threaten native species in the wild — but make great dishes on the menu.

A good example is the fresh Samoan crab that Pang served at a recent wine dinner. Originally brought here in the 1920s as a possible new food source, the crab quickly multiplied to threatening numbers. Efforts by the University of Hawai‘i, environmentalists and local chefs to contain the species have proved so successful that today the tasty little critters have become a good example of “it’s whom you know.” “Those crabs are very hard to get now,” Chef says, eyes twinkling with satisfaction, “but my nephew helped restore the O‘ahu ahupua‘a [land division] where He‘eia fishpond is, and where this crab thrives. We had five-pounders that night!

“We’re always trying to find new ways to use invasive species like Samoan crab, which are delicious, or robusta seaweed found on Moloka‘i.” Robusta is similar to local ogo, but much heartier. “Creative use of invasive species adds to our economy, and helps to preserve our [indigenous] natural resources,” Pang tells me. “We’ve been doing it for a long time, through programs sponsored by the University of Hawai‘i.”

Chef Pang is an ardent supporter of UH’s Maui Culinary Academy, and a constant mentor for his own staff. When it is time to consider new recipes for the Ko menu, Chef encourages his crew to be creative and involved. “When food is made with passion, it adds a whole new level to the experience,” he says. “So I tell the kids, ‘Make me something you loved from your mom’s or your auntie’s kitchen. Put your own spin on it.’ Our cooks are just beaming when they show me their interpretations of a family classic. It’s the food they grew up with, their family recipes. And it’s working.”

Who knows? Perhaps someone at Ko has a grandma who made noodle pudding.

In 2012, the Maui County Farm Bureau honored Executive Chef Tylun Pang with its Friend of Agriculture Award at Maui No Ka ‘Oi magazine’s ‘Aipono Awards gala. Pick up a copy of our May/June issue to find out who won this year’s readers’ choice ‘Aipono restaurant awards.