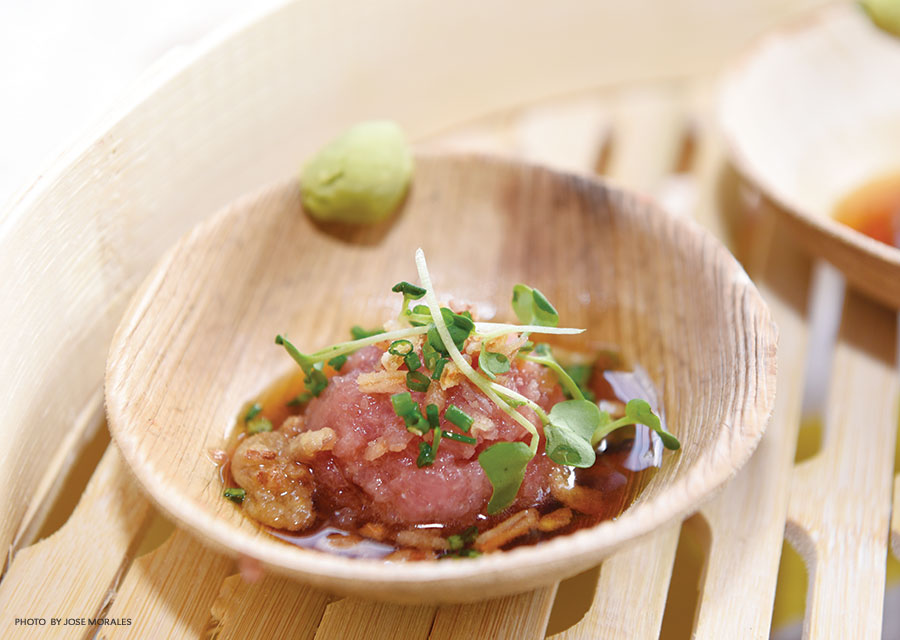 Fifteen Maui restaurants gave it their ‘onolicious best at the Kapalua Wine & Food Festival’s grand finale, the Seafood Festival held at The Ritz-Carlton, Kapalua, on June 12, 2016. At stake: The Best of Fest award sponsored by Maui Nō Ka ‘Oi Magazine. Attendees feasted on seafood from A to Z (or at least from ‘ahi to toro), while guest chef and James Beard Foundation Award-winning cookbook writer Hugh Acheson, Alaska Airlines regional sales manager Daniel Chun, MNKO publisher Diane Haynes Woodburn, and I, your humble dining editor, sampled and judged the many dishes. And the winner was. . . .

A very surprised Greg Harrison, executive chef at Morimoto Maui, accepted the gold for his Zenlike toro (bluefin tuna belly) tartare. Holding his plaque and the prize of a new Shun sashimi knife, he bowed slightly and whispered, “Thank you. Thank you. I am humbled at being chosen. I am so glad you enjoyed it.”

“The handling of prized bluefin tuna is a long process,” Harrison told me. “We taste the fish and check the fattiness in the flesh, break it down to its primal parts and freeze the fish at minus seventy degrees. The extreme low temperature creates the smallest ice crystals, helps to retain the fish’s natural color and texture, and kills any parasites and bacteria. On day two, we move the fish into a refrigerator set at thirty-two degrees; and day three, it is moved to a refrigerator set at forty degrees. This process keeps our fish as fresh as the day it was caught.”

All the judges agreed: the high quality and freshness of the fatty toro, combined with the balanced flavors in the dashi sauce, made this simple dish a winner. Congratulations, Chef Greg Harrison and Morimoto Maui!

Continue to next page for the recipe!