Story and photography by Matthew Thayer 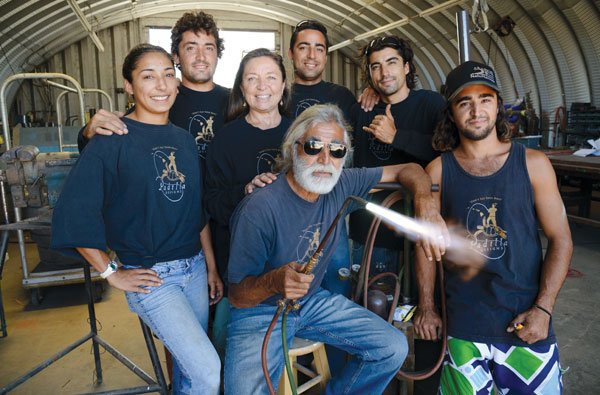 Longtime Kīhei residents may remember Larry Padilla as the welder who drove a rusty sculpture around town back in the 1980s. A large steel buoy in the bed of his 1969 Dodge pickup truck was an ever-changing planet to which he affixed metallic doodads of his own creation. Sandblasted free of paint and chrome to be exposed to the elements, the rusting truck and globe were also ever-changing, slowly turning different shades of orange and brown, rusting away as Padilla’s testament to the “movement of time.”

The Dodge with sagging springs was Larry’s mobile studio. It was common to see him parked in the lot above Charley Young Beach, selling $100 metal sculptures to tourists. Little did he know that his life and economic prospects were soon to change in a big way.

At the time, Larry and wife Mary Jo were focused on making ends meet while raising four boys and a newborn daughter. They had recently moved from a Haʻikū farm to Kīhei, where they hoped his sculpture sales would improve.

The couple had an easygoing, children-first approach to life that placed happiness and togetherness above worldly possessions. Brought up without television and radio, their kids had to make do with love and frequent family adventures like camping and hiking. The kids also learned to weld at an early age, because “That’s what Dad was doing and it looked like fun.”

When their life-changing moment arrived by way of a phone call from wood sculptor and friend Dale Zarrella, Larry almost took a pass. 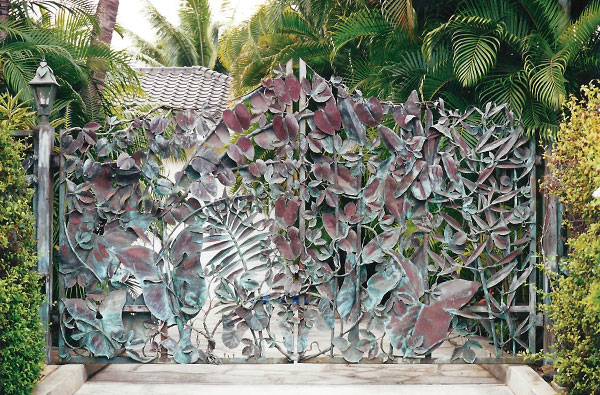 The result was a one-of-a-kind, functional sculpture: copper Hawaiian-rainforest foliage attached to a steel framework, with bronze highlights that resembled stalks of bamboo. Padilla called the gate “The Spirit of the Forest,” and once it was installed in Keawakapu, he received orders for two more in quick succession.

“And that was it,” says son Kaleo Padilla, who studied mechanical engineering and economics in college before returning from Los Angeles to help run the family business. “Once that first gate was up, people started seeing it and that was the start of the whole word-of-mouth thing.”

Twenty-three years later, all five children have joined the business and the company’s distinctive bronze and copper-leaf gates grace the driveways and doorways of homes from Kapalua to Mākena, from California to New York. Many of those properties also display functional artwork by Padilla Designs, including ceiling and wall sculptures, torches, railings and water features. Working in materials that will outlast lifetimes–copper, brass, bronze and stainless steel–the Padillas create custom functional pieces that sell for as much as $100,000. The family-run business in the Central Maui Baseyard is busy and getting busier.

A recent day finds all seven Padillas on the property—Paz welding a gate bound for Kauaʻi, brother Janus and sister Regina grinding bronze highlights on other gates to make them shine, brother Ian applying a coat of acid to a gate’s copper banana leaves to turn them just the right shade of green. Inside an adjacent trailer, mom Mary Jo tends to payroll, as Larry and Kaleo discuss a big contract in the next room.

There was never any pressure for the kids to enter the family business, but, one by one, they elected to pick up the torch. Four are full-time employees. Regina, a student at University of Hawai‘i Mānoa Campus on Oʻahu, works in the shop when she is on island. Regina is also tasked with expanding the company’s social-media presence.

“We have a cool job, cool bosses, a flexible schedule and get to live on Maui,” says Kaleo. “Why not join the business? You get to be around people you love.” 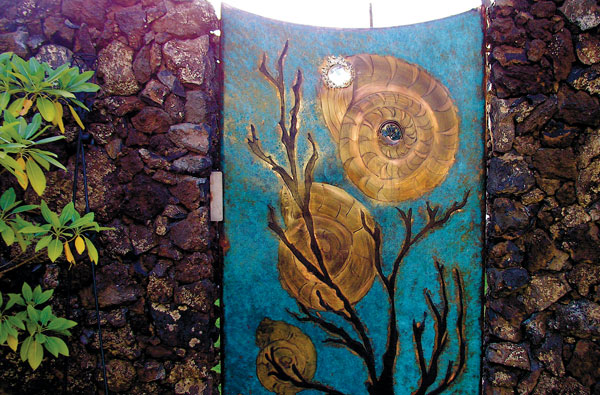 Kaleo says his mom and dad are the stars of the operation. “[Dad’s] definitely an artist. He’s not limited to metal, but that is his passion. Before we had all these machines, it was just him with his brazing torch. You’re melting a rod and turning it into whatever you want, creating a three-dimensional piece out of a three-foot stick. That is incredibly hard to do.”

And Mary Jo? “We call her the glue that holds all this together. My dad is far right-brained. She is more left-brained. Without her, things would crumble.”

Larry and Mary Jo’s can-do leadership, and the younger generation’s energy and creativity, have made Padilla Designs a favorite of Hawai‘i homeowners looking for functional, high-end art. Kaleo says projects are usually a collaboration.

“Clients come to us with an idea, or maybe just an open space,” Kaleo says. “We get a sense of their taste, present several renderings, go back and forth with the drawings.”

Once the client approves the sketch, the colors, patinas and highlights, the Padillas sit down and figure out how they’ll build it. 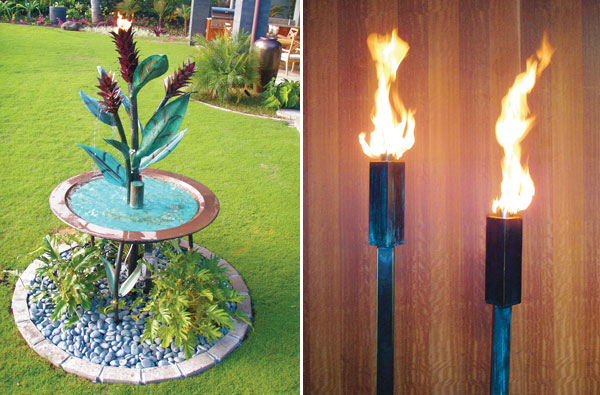 “We have never had a dissatisfied client,” says Kaleo. “We would rather start from scratch than have a client live with something they do not like.”
Good thing—these pieces are built to last a long, long time.

“It’s not going to rust; it’s going to become richer with age,” says Kaleo. “We want to create art that will last. That’s why we use copper, brass and stainless steel. We want our own kids to see our work someday, and be proud.”

When Larry Padilla wants a reminder of the early days of his career, all he has to do is climb inside his ’69 pickup. The truck that folks in Kīhei used to call his “time machine” is parked in the company base yard and still runs.

Larry says someday he plans to make the truck the centerpiece of a movie about his fable of the “Turtle and the Fisherman.” Then he’ll place that old Dodge in a stainless-steel bowl, where it will rust until it is dust. The truck is his Mona Lisa, he says. “It will be done when I’m done.”

VISIT THE PADILLA DESIGNS WEBSITE AT PADILLADESIGNS.COM TO VIEW PHOTOS OF THEIR WORK, CUSTOMER TESTIMONIALS AND CONTACT INFORMATION.