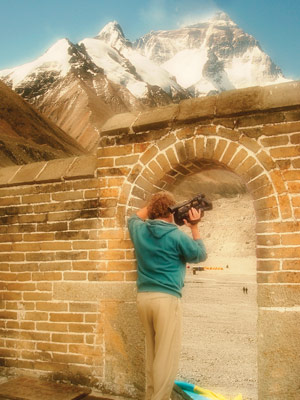 Tom Vendetti has always been a Big Picture kind of guy.

By his early twenties, convinced that finding the meaning of life was the path to happiness, he began to envision his own life as a quest. Literally. In the 1980s, after earning his graduate degree and working for several years in a mental-health program in Flagstaff, Arizona, the Maryland native set out to travel around the world. Along the way, when he mentioned a fondness for climbing mountains, someone told him he needed to go to Mount Everest.

“Where’s Mount Everest?” he asked, “and how do you get there?”

Now sixty, the longtime Maui resident still works in mental health. But that first visit to the Himalayas sparked many more, producing his other career as an Emmy Award-winning documentary filmmaker.

“I evolved along with the technology,” Vendetti explains. “Just about anyone now can make a broadcast-quality film; what sets some apart is being passionate about storytelling and having a cause. My cause for years has been promoting happiness, both as a psychologist and a filmmaker.”

Happiness. The Declaration of Independence guarantees our right to pursue it. It’s for sale in an endless parade of commodities permeating our culture. And yet the packed psych ward at Maui Memorial Medical Center, where Vendetti treats patients, is symptomatic of our society’s failure to find it.

In contrast, he observes, “In the Himalayas, the people don’t have a lot of material wealth, yet they seem very happy.”

Vendetti’s Bhutan: Taking the Middle Path to Happiness documents the remote Himalayan kingdom that promotes gross national happiness as a matter of governmental policy; the film won Emmys for Vendetti as producer and for Christopher Hedge’s original music.

“Some would say what he experienced was magical,” says Hana resident Kris Kristofferson in his onscreen introduction to the film. “Others would say he lived a charmed life. Tom would say, ‘You just have to show up.’”

Vendetti advocates getting out of your own way and seeing what happens. Often, what happens is such a synchronicity of events that it seems beyond coincidence.

On that first journey to Mt. Everest, a fellow passenger on the rickety plane ferrying them from Kathmandu into the Himalayas asked if he could walk with Tom. The man turned out to be Tenzing Norgay, the Sherpa who had accompanied Edmund Hillary when those two became the first humans to reach the summit of the world’s tallest peak. Tenzing invited Tom to be his guest at a thirty-year reunion of the two legendary mountaineers, sponsored by National Geographic.

They walked together for days. At one point, Vendetti asked the renowned Sherpa where he would most like to trek himself.

“The Grand Canyon,” was the answer.

Years earlier, the Grand Canyon and its surroundings had been key elements in a mental-health program he had supervised in Flagstaff. Vendetti took patients on hikes in the canyon and on rafting trips down the nearby San Juan River to expose them to the healing effects of nature. Tom documented one of the river trips by producing and editing the film Therapy on the River.

“It made it onto television. My first attempt. Seeing that, I was addicted.”

In faraway Nepal, hearing Norgay’s words, Vendetti thought, “The Grand Canyon was practically in my backyard. Could life be telling me that I never had to leave home to find what I was looking for?”

In 2006, Vendetti directed and produced the award-winning film Sacred Tibet — The Path to Mount Kailash, whose “stars” include legendary jazz flutist Paul Horn; the late Maui Dharma Center leader Lama Tenzin; and His Holiness the Fourteenth Dalai Lama, author of The Art of Happiness.

Granted an interview with the Dalai Lama, Vendetti found himself flustered by a camera glitch. When he muttered, “Technology!” the Tibetan spiritual leader started to laugh.

“He said, ‘I don’t think it’s technology. I think it’s the camera person!’” Vendetti recalls. “Then he started laughing harder.”

That broke the ice. What was supposed to be a five-to ten-minute interview went on for forty-five minutes.

“His teaching emphasized ridding negative emotions from the thought process,” Vendetti says. “If you practice thinking positive thoughts, you will feel happy. It seemed like such a simple concept, but try to do it. His teachings not only influenced me personally, but also as a psychologist in the way I treat patients.”

One of the challenges in filming Sacred Tibet was getting Paul Horn — known for landmark albums in the Taj Mahal and the Great Pyramids — into the renowned Potala Palace.

“Trying to get official permission can take a lifetime,” says Horn. Instead, they decided to “just show up” and see what happened. When the Chinese Potala Palace guards took their lunch break, they got permission from a local monk for Paul to play in the ethereal setting. Tom captured it on film.

Each Himalayan country has provided a spiritual milepost. From Bhutan, Vendetti learned that wealth and possessions are not factors in being happy. In the mountains of Nepal: “I feel closer to God there. Nothing has to be said; you only have to allow nature to speak to you.”

Whenever he is troubled, he says, “I think of the Tibetan people and their hardships and it puts everything into perspective. Their concept of taking the middle way, the path of moderation, has influenced me greatly.”

Actress, composer and author Ann Mortifee, Paul Horn’s wife, has narrated Vendetti’s last two films. “He’s got a purity about him,” she says. “He’s very humble, honest and straight ahead. But he’s also a visionary.”

Tom’s quest for happiness isn’t finished, but he’s found a good chunk of it in Hawai‘i, islands he discovered on his first round-the-world trip. He and wife Nancy have made their home on Maui for the past twenty years.

His commitment to cultural and environmental preservation through filmmaking led to his launching the first Angkor Wat International Film Festival in Cambodia earlier this year.

His next film project, The Quietest Place on Earth, was influenced by a magazine article citing sound research in Haleakala Crater. While the film abounds in rich images, its real destination is the stillness to be found inside each of us.

Vendetti acknowledges that his outlook has been deeply influenced by Buddhist philosophy — “being in nature, stopping the chatter in your mind and opening up to that awareness.” He doesn’t call himself a Buddhist. “I believe in the good of all religions. I find security in not knowing, and letting go of needing to know the answers.”

Rick Chatenever wrote the script for When the Mountain Calls.