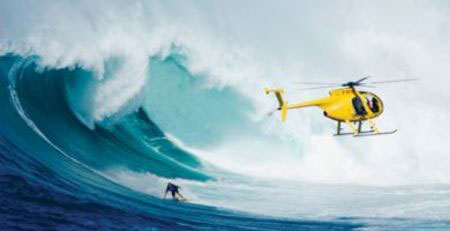 By 1992, Hawai‘i Island’s ever-shifting Kilauea eruption had concentrated itself again inside fiery Pu‘u ‘O‘o—a raw pit filled with noxious gasses rising from a boiling orange pond of lava. In November of that year, a charter helicopter hovered over the caldera as a videocam-wielding passenger marveled every time the strong East Hawai‘i winds pushed the toxic whiteness aside to expose the blazing cauldron below. Then the worst thing possible happened. The chopper lost power and fell.

Instead of dropping into the lava pond to be flash-fried, the flying machine hooked onto the inner wall of the caldera. There the passengers waited for certain death—either roasted by a lava fountain or gassed by sulfuric acid or just abandoned by the world, because no one in his right mind would ever come into Pu‘u ‘Oo caldera to rescue them.

No one, that is, but Don Shearer.

“Before that happened, I thought I could do anything,” says Don, the owner and hero-in-charge of Windward Aviation. His company’s major assets—beyond balls, brains, and nonstop aerial performance—currently consist of four Hughes 500D helicopters that are painted a billiard-ball-brilliant shade of yellow. “That yellow is the brightest color I could find that wouldn’t fade,” Don told me. “My biggest fear is a mid-air collision.”

If you live on Maui, you have probably seen these gleaming yellow “flying eggs” against the rich blue daytime sky. Maybe you saw them dropping 120-gallon buckets of water (dipped out of swimming pools) against the forefront of a recent Kïhei scrub fire. Or lifting injured hikers out of remote canyons. Or hovering over the otherwise-inaccessible native forest, hitting invasive species with pinpoint-accurate blasts of herbicide. Or zooming over the monster waves of Jaws, shooting surf footage with hand-held cameras or with gyrostabilized Cineflex camera mounted above the skids. Or whisking bikini models to remote locations for fashion shoots, or delivering roof trusses to remote construction sites.

For Steven Spielberg, Don and crew sling-loaded into the boonies enough material to construct a village; when the filmmaker changed his mind, they sling-loaded the materials back out. Sometimes they drop flowers over funerals or graduations.

Windward Aviation operates out of three hangars tucked up close to the control tower of Kahului Airport. According to Don, his outfit is responsible for 85 percent or more of the utility-helicopter services in the State of Hawai‘i. He and his pilots are certified not only for all FAA-regulated functions (including crop-spraying and hauling hazardous materials), but also for the “more hardcore” standards of the U.S. Department of the Interior, the Department of Defense, and the Drug Enforcement Agency—in other words, for everything. Don says that it costs the company up to $30,000 just to get a pilot completely certified.

Needless to say, the job requires not only nerve, but also extraordinary skills and experience.

Don Shearer himself is one of those rare people who just was not going to be happy unless he escaped the force of gravity. As a high school sophomore in Redondo Beach, California, he talked his way early into his school’s aeroscience program.

His side job at Kentucky Fried Chicken didn’t pay enough for him to afford flying lessons, so at age eighteen he traveled to Tulsa, Oklahoma, to get trained as an FAA-certified mechanic. Shortly thereafter he landed a job with a start-up company called Robinson Helicopter, which is today the world’s leading producer of civil helicopters. From there, Don proceeded to get “every license you can get.”

He came to Maui in 1986. “When I moved here, I was a broke-[bleep] flight instructor,” he says. “I had nothing. I owed the IRS a bunch of money and I had holes in my underwear. Today I have the best friends anyone could ever have, and I still have holes in my underwear, but I don’t owe the IRS anything.” He created Windward Aviation in 1990, intending to offer tour-flying services. No bank would loan him money, so he leased his first helicopter, using funds borrowed from private parties at hair-raising interest rates.

Windward Aviation hit its stride in 1994 when the U.S. Navy began trying to clear the bombs off the island of Kaho‘olawe. Don’s company won the contract to ferry people and materials ceaselessly back and forth across ‘Alalakeiki Channel. “Kaho‘olawe put us on the map, but it was also the biggest nightmare of my life,” he says. His business ballooned to eight choppers, ten pilots, and twenty-one employees.

“I remember one morning at 6:20 a.m. we had seven choppers running at the same time. I thought to myself, what the hell am I doing?” In 2004 he sold off half of those helicopters, trimming his operation back to core services and a reasonable, nonstop, every-day-of-the-week, never-know-what’s-going-to-happen-next work schedule. In his career, Don, now fifty years old, has personally racked up over 21,000 hours of flight time, most of that at the controls of a Hughes 500D.

The machine (now more properly called MD-500D, since McDonnell Douglas acquired Hughes Helicopter in 1984) began life during the Vietnam era as a light observation helicopter for military use. It’s designed for easy maintenance in field conditions. “You and I could remove the engine in one-and-a-half hours,” says Don, pointing to a surprisingly slim little 450-horsepower turbine engine built by Rolls Royce (price: $300,000, almost half the total cost of the chopper). In one of these aircraft a skilled pilot can lower a thirty-five-pound weight on a 100-foot line and keep it steady within a three-foot radius. It has a top speed of 180 mph, a cruising speed of 130 mph, a twenty-eight-gallons-an-hour fuel thirst, and no padding, no frills. It’s all business.

While Don expresses affection for the helicopters, he is unreservedly and enthusiastically in love with the president of Windward Aviation, his Jamaica-born wife, Donna. “The backbone of the company is this chick right here,” he exclaims, and Donna raises both arms in a double shaka gesture. She does the scheduling, accounting, contracts, certification paperwork, and legal necessaries, plus she surfs, pumps iron, and cooks with skill that is legendary among their wide circle of friends. “And,” says Don, “she is an extreme beauty, in case you hadn’t noticed that!” She came to Maui with a background in marine biology, but wandered into Windward Aviation thinking it would be fun to learn how to fly a helicopter. “She paid for the first three lessons,” says Don. “Then it was on the house.” That year was 1992—the same year Don almost killed himself flying into the maw of a volcano.

He described that rescue for me—a stunt so reckless and widely reported that it was later reenacted for a British television documentary. When Don learned that a charter helicopter had gone down, he flew over from Maui to see what he could do, picking up a national park ranger along the way. They approached the fuming caldera, established radio contact with the downed craft, and stared in alarm at the situation, that lake of bubbling lava 300 feet down. The park ranger said, “We’re not going in there, no matter what you say.” Don ignored him.

“We crossed the rim and descended into the crater. As soon as I did that, we got hit with sulfur dioxide and raw smoke, a total white-out.” Blinded, he felt a skid strike rock. The wind shifted and he got his bearings again, but they were engulfed once more. “I lost consciousness.” The chopper banged solid ground a second time. The ranger grabbed a respirator and jammed it on Don’s face. “I got two good hits of air and came to again. Luckily the wind shifted, but I could only see about fifteen feet. I was real worried about running my blades into the crater wall.”

He’s grinning as he recounts the inch-by-inch maneuvering, getting a skid close enough that the desperate men could jump on, then easing his way up and out. But he says, “As soon as we got out, we started crying uncontrollably.”

The company scrapbook includes a handwritten card that reads: “Thank you for saving my dad.”

By the way, Windward Aviation is looking to hire another pilot for its crew. For some reason, qualified personnel are hard to find.

“I’ve always been enamored of what we do,” says Don Shearer. “It’s so colorful and unusual.” In most parts of the U.S., civic authorities such as police and fire departments have their own aerial equipment and aviation programs. It is rare for a private company to be called to such a wide range of dramatic duties. That drama—backed by Don’s larger-than-life persona—explains why Turner Broadcasting’s TruTV cable channel is set to air a reality TV mini-series about Windward Aviation. Look for the first of six episodes of Maui Chopper (working title) on December 8, channel 19.