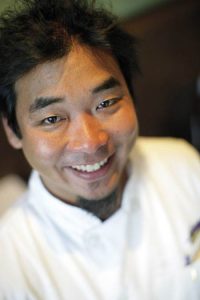 For two years running, Maui No Ka ‘Oi magazine has presented a very special ‘Aipono Award. While all the rest of our restaurant awards are voted on by our readers, Chef of the Year is chosen by peer votes: for chefs, by chefs. We ask culinary professionals islandwide: whose cooking has wowed them recently, who’s taking risks in the kitchen, and who deserves special recognition for their craft. Submitting a name isn’t enough—we make them tell us why (anonymously, if they choose). This past year, the honor went to Chef Ivan Pahk of Sansei Sushi Bar & Restaurant. But other Maui chefs received plenty of votes as well, including two featured here. Check out these three chefs who Maui insiders say are worth watching.

“From his fun and outrageous personality to his ingenious creations, Chef Ivan lives and breathes food!”

“Ivan’s imagination and unique taste profiles enable him to create dishes that are different from anything you will find in Hawai‘i or on the Mainland.”

“A very humble person. It is the people who have tried his food that promote him.”

Ivan Pahk began dreaming of being a chef while in high school on O‘ahu. “On career day,” he says, “when the chef made cherries jubilee, I thought, ‘That’s what I want to do.’” Culinary school proved too expensive, so Pahk joined the military. After four years of cooking in the mess hall, he discovered that on-the-job training was more his style.

As an apprentice under D.K. Kodama at Sansei, Pahk soon became the restaurateur’s right-hand man, in charge of the kitchens at both Sansei locations. Pahk has since managed to scoop two “best chef” awards (including one from The Maui News), among a slew of others—quite a feat amidst Maui’s stiff competition. Winning MNKO’s chef-elected title was “surreal,” says Pahk. “It was one of the first times I’ve been totally surprised. I called my mom on the way home. I was floating.

“All my cooking knowledge is . . . not formal, eh?” says Pahk. Nowadays, his most rewarding lessons likely take place off island, on research trips with Kodama. “Every year we go to New York,” he says. “We go to see what’s the new thing, what new styles and flavors we can bring back here. It puts us ahead of the game.” This September they visited Hong Kong for eighteen days of eating and cooking. Last year, it was Saipan. Back home, Pahk weaves his culinary souvenirs into Sansei’s rambling, multicultural menu.

Pahk’s popular crab ramen is the ideal nosh food—a gourmet remake of the dish Hawai‘i kids crave most when away at college. Firm noodles are flecked with basil, cilantro and jalapeño. Rich, truffle-scented steam wafts up from the bowl.

“Soup is so soulful,” says Pahk. “It’s got to simmer. It takes a long time to make, so it’s got to come from the heart. . . .” Pahk’s culinary heart is a playful one; his creations include unlikely marriages such as French onion-style Vietnamese soup topped with a puff pastry and Oaxacan shrimp cocktail—served in a Japanese restaurant.

“I want to bring in more Korean influences,” he says. At dinner, I try his Korean tako (octopus), an easily overlooked item on the menu. It’s delicious—and raw. It comes in a glass dish, looking small, grey and slimy . . . a bit like monkey brains. But each crunchy, chewy bite is sweet and spicy, perfectly complemented by the pickled cucumbers it rests on.

“I like to bounce stuff off the wall,” laughs Pahk. And how about bouncing that stuff off the wall of his own restaurant? “I have a five-year plan,” he says. “I just want something small, a small bistro. Hopefully D.K. will be a part of it.” But his real fantasy is to step into Anthony Bourdain’s shoes. “I’d love to have a cooking show,” admits Pahk. “I try to take Mondays off, so I can watch No Reservations.”

For now, catch Chef Pahk live at Sansei Kapalua, where he offers public cooking classes on the first Wednesday of each month.

“David Patterson uses sustainable practices that are important in an island economy and environment. He searches for food sources first in Hana, then on Maui, and then in Hawai‘i. David’s work exemplifies the best of Maui.”

“He has inspired me by incorporating 90 percent island-grown products in his menu.”

“His menu changes nightly (not an easy feat) and the cuisine is excellent!”

As Chef of the Year votes rolled in for David Patterson, a relative newcomer at the Hotel Hana-Maui, I admit I was surprised. Critics who had blasted the resort’s dining room for decades were suddenly changing their tune. Hmmm . . . what’s going on out in Hana? I went to see—and taste—for myself.

Chef Patterson greeted me in the lobby. Amiable and easygoing, this Kentucky native seems well at home in remote East Maui. “I love the lifestyle. I love the pace,” he says. “From a professional perspective, I couldn’t be happier.”

Patterson came from Maisonette, an Ohio dining institution famous for earning five Mobil stars for forty-two consecutive years. He relocated in 2005 to the Hotel Hana-Maui’s Ka‘uiki restaurant, which had a rather less stellar reputation.

Historically, the restaurant suffered from numerous problems. Service was inconsistent. The kitchen seemed locked in an internal battle to be something it wasn’t. Food, trucked or flown in from outside, often arrived to the table limp or stale. Under Patterson’s leadership, these complaints are becoming history.

“The first year was disheartening,” admits Patterson. “So much negative press. Guidebooks said such horrible things about this restaurant, I quit paying attention to the reviews.”

If the restaurant’s recent Wine Spectator Award of Excellence and Chef of the Year votes are any indication, he may want to start reading those reviews again.

One major change that Patterson instituted is a terrific success: a brand-new menu nightly, featuring five fresh appetizers and entrées. Patterson calls it “ingredient driven”—meaning he walks into the kitchen and designs entrées around the freshest ingredients available that day. “Hana’s isolation forces an intimacy between the farming and fishing community and the hotel,” says Patterson. He’s cultivated close relationships with local farmers and fishermen, whom he buys from directly.

“Right now ono is running really strong here at the buoys. We have nice 30-pound ono coming in at the back door,” he says. “We also had a pretty good ‘ahi season this summer. We tied a 200-pound ‘ahi up on the plumeria [tree] out back. These are things you fantasize about in culinary school,” he laughs.

“I try not to overdo things,” says Chef Patterson. “We have such awesome products. I want to preserve their integrity.”

“At Maisonette,” he explains, “we had Alba truffles, but there was no emotion assigned to the product. There’s a lot more poetry in using tomatoes from a friend’s backyard than a truffle from who knows where. When you can put a face with every product on the plate, that’s cool.”

As for his ambitions? “I dabble with the idea of owning my own restaurant one day,” he says. “I’m certainly not in any rush.”

“Brian’s food is simple and really good. He is humble yet has an admirable confidence about him. Capische? has grown into an amazing experience for diners and foodies alike.”

“I’ve had very, very good meals at Capische? that were creative and well executed.”

I find Brian Etheredge, the chef/owner of Capische?, half-buried beneath Babbo cookbooks, The Cheese Plate and Wines of Italy—dictionary-sized tomes. He’s hard at work crafting the menu for Il Teatro, his teppanyaki restaurant-turned regional Italian showcase downstairs. Il Teatro guests sit at two demonstration tables, a fork’s toss from where the chef cooks up squab and Tuscan-style rib eye just for them. It’s the offshoot of Capische?, the Wailea restaurant Etheredge has built into a culinary tour de force over the past seven years.

If family legends are to be believed, Etheredge began cooking at age five, when his grandfather and brothers returned from fishing trips with a boatload of bass. They got to fish; he got to cook. By age thirteen, he was washing dishes and making Caesar dressing ala minute in a Florida restaurant.

Now the successful young restaurateur warns the green hands in his own kitchen. “I tell them all: Get out of the business. You’ve got to be a little crazy to do this and enjoy it.” He obviously fits the bill—on his recent honeymoon in New Zealand, he and his wife, Chef Kristin Etheredge, cooked for the personal chef they’d hired to cook for them. “We hadn’t cooked for a whole week!” he exclaims, as if that explains it.

Etheredge talks excitedly about mastering old traditions—such as his simple Bolognese with its heady aroma of veal, beef, and pork—and playing with new trends—like an amazing ‘ahi steak wrapped in house-made prosciutto. “What we’ve created at Capsiche? will never change that much. We’re here for our loyal customers,” he says. “But with Il Teatro, chefs are coming out of the woodwork to see what we’re doing. Il Teatro is our inspiration now,” he says. “It’s forcing us to learn, to pick it up every single day and learn something new about Italy and Sicily.”

Still, Etheredge claims, “It hasn’t always been about the food in my career. It’s also about being a restaurateur.” Just a year after he signed on as chef at Capische?, he moved the restaurant. The ownership went through several evolutions as partners dropped in and out. “It was tough in the beginning . . . pretty scary,” he says. “It’s great to go from where we were, with just nine tables, to what we are now, with the caliber of chefs we’ve got.”

With an exquisite new restaurant, what else would Etheredge like to accomplish? “Every chef’s dream is a cookbook,” he says, with another winning grin—proving that there’s always somewhere to go, even when you’re at the top.