The list goes on. “We have pioneers coming,” says Jordan, “Richard Sanford from Alma Rosa Winery; Fred Scherrer from Scherrer Winery; and Ted Edwards—he’s been the winemaker at Napa Valley’s Freemark Abbey for thirty-nine years! Plus, one of today’s most beloved winemakers, Greg Brewer, from Brewer Clifton, who was on the cover of Wine Spectator and Wine Enthusiast. Greg was a French language instructor at UC Santa Barbara—went to Japan and got into Zen culture, and now he is making wine. Just one of the happiest guys on the planet. That’s what makes Kapalua Wine & Food Festival special. It’s the wonderful people it attracts. The aloha spirit is contagious.”

And of course, Maui Nō Ka ‘Oi will be there, once again hosting Best of the Fest at the Sunday-night Seafood Festival grand finale. Join us. For more information on all panels and events, visit KapaluaWineAnd FoodFestival.com.

Not by Wine Alone

Wine is the star attraction of the Kapalua Wine & Food Festival, but it’s the food that keeps the wow factor in an upward trajectory. This year, festivalgoers will be treated to New Orleans’ down-home divine from two of the town’s most celebrated chefs. 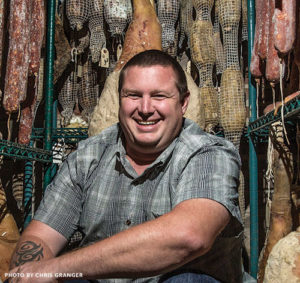 First is Stephen Stryjewski, chef/partner of Link Restaurant Group, whose member restaurants include Cochon, Pêche Seafood Grill, and La Boulangerie. In 2011, the James Beard Foundation named Stryjewski “Best Chef South.” On Saturday, June 8, he’s all ours, presenting a dinner that benefits Maui Food Bank. “Cochon is one of the great restaurants,” says master sommelier Michael Jordan. “Though New Orleans offers myriad world-class options, I eat at Cochon twice in a row when I’m there—this guy knows how to cook!”

On June 9, Slade Rushing, executive chef of the famed Creole restaurant Brennan’s, will create a Sunday champagne brunch that Jordan promises “will kick ‘ōkole.” Loose translation: It’ll knock you off your keister.

Good thing cooking class is first! Mark your calendar for the Saturday cooking demonstration with Chef Mark Tarbell of legendary Tarbell’s Restaurant in Phoenix. The coursed lunch will be eloquently paired with selections by winemaker Laely Heron, of Heron Wines.

“What’s remarkable,” Jordan comments with pride, “is that these incredible chefs donate their time to be here. It’s pretty amazing how the aloha spirit spreads to all corners of the world.”

What’s Your Taste in Wine?