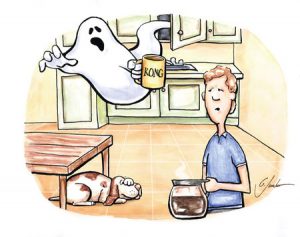 I should have known right from the start there was something strange about that house. The ad said, “Wailuku. 4 bdrm. Rural setting.”

Most Wailuku neighborhoods are built like cane camps, miniature and close—so close that four bedrooms would require at least one person to share a mattress with the next-door-neighbor’s Pontiac.

Plus, the rent was cheap. That was weird.

I knew I was going to rent the place as soon as I saw the ad.

I’m telling you this because we’re pretty close to Halloween, and most people think that ghosts are just a fantasy.

The “rural setting” proved to be a nearly hidden dirt track near the mouth of ‘Iao Stream. The sprawling, out-of-plumb old house sat on a dried-up wetland area right in the blast of the sea wind—incessant, scalding, and gritty.

The place was cavernous and dark, full of rooms and various floor heights, none of them level. One set of crusty windows looked seaward, where rank after rank of little combers constantly rattled a billion rocks. Another looked at the stream itself, once Maui’s greatest aquifer, now an arid concrete chute tagged with spray paint, with rusty shopping carts tossed into it.

My neighbors were all Hawaiians, including a blind man who walked past every day, led by a disobedient white dog.

The spooky stuff started happening almost immediately. Every night I would close the blinds in the bedroom; in the morning they would be open. Furniture would move around when no one was looking.

One night some friends and I were sitting in the kitchen when a pantry door swung open on its own. I don’t mean a little wiggle. I mean a long, slow, deliberate all-the-way opening. We stopped talking and just stared at the door and then, darn it, the door deliberately swung itself shut again.

The blind man, Frank, proved to be an amiable fellow who had lived his entire life in the neighborhood. One morning I invited him in for a visit. He came cane-tapping up the little wooden stoop while I held the crusty screen door open. His dog almost refused to enter. Frank had to scold it into submitting, whining, to a spot by the door.

While I made coffee, I said, “Tell me about this house, Frank.”

He smiled. “The man who built it, his name was Kong. He lived here many years. Plenty kids.”

And he told me this: Kong had once been some sort of caretaker of ‘Iao Stream, knew every inch of its banks, and would travel by foot every day from here up into ‘Iao Valley and back. Then water policies began to change, and they started diverting water from the stream. They didn’t need Kong anymore, so he lost his job.

As the stream started shrinking, Kong started drinking—an inverse ratio sort of fate—and as the channel grew dry, he turned more and more mean and physically abusive. Things got so bad at home that his wife took revenge and killed him.

“In his sleep,” said Frank. “Cut off his head. Right in there.” He waved his arm vaguely in the direction of my bedroom.

I lived in that house for two years and never actually saw Kong. But he kept shifting the chairs, opening and closing doors, operating the light switches, and once blocked me out of the house for an hour or two by jamming all the doors. I was never afraid of him. That’s just how it was.

You may think I’m talking about long ago, the hippie days or something. Not at all. Very few years have passed. I don’t know who rents the house now, but I’m sure that Kong still resides in it—waiting, no matter how long it takes, to hear once again the rumble of unrestrained river water.