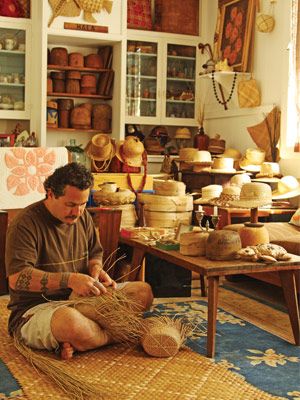 Groves of the ancient hala tree (Pandanus tectorius) greeted the first Polynesians to paddle ashore here, but legend says that Pele’s wrath helped spread it about the Islands. The tree’s stiltlike prop roots and tangle of fallen, spiny-edged leaves snagged the volcano goddess’s canoe when she landed on the island of Hawai‘i. Enraged, she ripped the tree apart, casting it across the Islands. The resilient hala took root wherever it landed along Hawai‘i’s coastlines and lower elevations.

Early Hawaiians would have welcomed the sight of hala; peoples across the Pacific used every part of the plant, including the three- to-six-foot-longlauhala (hala leaves), which burst like huge pompoms from its branch ends.

“Lauhala weaving has been in every Hawaiian family since the beginning of time — for thousands of years,” says soft-spoken master weaver and kumu (teacher) Pohaku Kaho‘ohanohano. In the old days, every family had weavers who turned dried hala leaves into table and floor mats, baskets, pillows, mattresses, fans, clothing, thatching, and sails. “You couldn’t move into a home without a floor mat,” says Pohaku.

As a teenager exploring his genealogy, Pohaku discovered that his great-grandmothers were weavers, but his family’s style, traditions, and patterns died with them. None of their handwoven pieces were passed on to the next generations. “They passed away long before my time, so I had to learn outside of the family.”

Pohaku’s retelling of his studies sounds much like a genealogical recitation. He knows the dates of key events (first lesson — Mother’s Day 1993), first hat making (Mother’s Day 1995), the year he started teaching (1996), and ages and passings of his teachers. Over the years, Pohaku studied with seven different teachers, all of them women, most of whom had learned to weave between the ages of six and twelve. Today only three of his kumu remain — Josephine Fergerstrom, Emmaline Agpalo and June Ka‘aihue — all still weaving in their seventies, eighties and nineties.

Pohaku’s kind of apprenticeship may also be a thing of the past. Today, he estimates, fewer than 10 percent of Hawaiian families carry on the tradition. “When I learned,” he says, “I was one-on-one with my teachers. I went to their homes, became part of their family. You eat with them, weave with them. You grow up with them, their children, their great-grandchildren.” From his teachers he learned different hat styles, knots, and braiding; he says there are some techniques that fewer than five people still know how to do; few of their children carried on the family tradition. 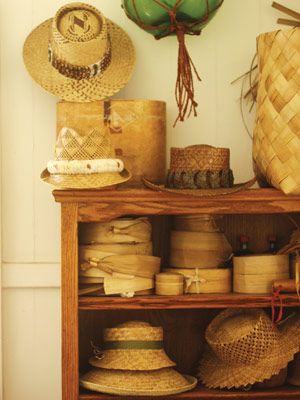 Pohaku bears a strong sense of responsibility not only to perpetuate the craft, but also to honor the individuality of each weaver. Each family has its signature style. “I can look at a hat and know who made it by the color of the lauhala used, the style of the weave, the pattern,” he says. He teaches his students the name of each pattern and where it came from. Just as the kupuna (elders) protected their work by keeping some patterns within the family, he works to protect his own teachers. “To know the history and knowledge behind a piece is greater than just copying a design.”

And his own style? Pohaku says it’s all his teachers’ wrapped into one. After Western contact, lauhala artisans added modern hats, fans and other accessories. Hats are Pohaku’s “canvas” — a way to keep ancient patterns alive.

Eager to experience both the art and the lesson, I sign up for a class at the Luana Gardens in Kahului. “Bring scissors and a rag,” Pohaku tells me over the phone, though he doesn’t say why. When I arrive, he shows me a pile of hala leaves he has collected for me. He deftly demonstrates how to trim the base of the leaf and then starts a narrow tear of the leaf margin. He runs his right thumb up the split, stripping off the thorny edge, and repeats the action on the other side. The leaf’s midrib also bears spikes; a vigorous rubbing with the wet rag helps prevent a reenactment of Pele’s first encounter with hala. He wipes the rag on both sides of the leaf to remove dirt and detritus. Some ten leaves and a few ragged nails later, I ask if I can start to weave. Pohaku explains that he always starts new students with cleaning the material. “If you don’t like the thorns and cleaning,” he says, “you shouldn’t be weaving.”

He sets me up for making a simple bracelet. Over the next hour and a half, I fall into the easy rhythm of bending two thin koana (strips) of  lauhala down, keeping three up, securing the checkerboard pattern into place by weaving another, lighter koana across and around the ring, followed by three strips down, two up. Once I get the knack of it, I can multitask and talk story with other students, who are tackling more complex bracelet designs, hats, mats and even bolo tie clasps. Students queue up to ask the ever-patient Pohaku for guidance at tricky transition points.

My finished product has flaws, but I love both the look and feel of it and the rare, for me, experience of actually making something. Toward the end of the class, one student’s grandchildren arrive, and it’s obvious that the other students know them. It seems that Pohaku is weaving together not only lauhala, but also community.

“I had a dream once,” he says, “that I was weaving a bamboo hat.” He told his teacher about the dream. She asked if he was weaving it on a wooden hat mold, because usually bamboo hats were braided, not done like lauhala from the top on a mold. “Yeah, I was,” he said. “That was how your great-grandmother used to weave her hats,” she told him, calling his great-grandmother by name. From his dream and his kumu Pohaku found a way to learn from his own family of weavers.

“I love it,” he says of the craft, “because it’s part of my culture. I’m doing what my ancestors did. This is survival for me. It’s in my blood.”