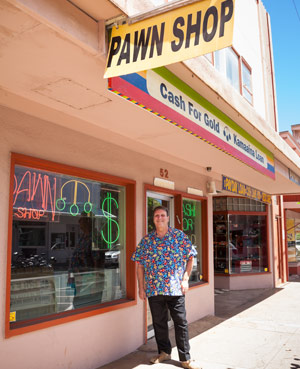 Richard Dan has been called the unofficial mayor of Market Street. On one block between Main and Vineyard, five storefronts are his: a pawnshop, a payday loan, a general-merchandise store, a space he describes as “the outlet of unclaimed goods,” and Kama‘aina Loan & Cash for Gold, where astute shoppers can snag high-end accessories or fine art at surprisingly low prices.

Hollywood has sullied the image of pawnshop clientele. Most of Dan’s customers are working people: a business owner who needs a loan to cover payroll, or a young couple planning a first-birthday lu‘au. Sometimes a hotel concierge will send a visitor who hasn’t the cash to pay his bill. And there’s the occasional snowbird whose $14,000 mortgage payment is due at an inconvenient time.

Some customers bring items not to pawn, but to sell. In his career Dan has bought and sold an entire art gallery, a signed Abraham Lincoln document, a papal bull, a railroad car, and post cards signed by Father Damien. There’s a retired judge who routinely picks up diamond earrings for his wife. He calls them his “doghouse keys.”

Behind the counter, a labyrinth leads to an elegant private room. If the item you want to purchase, pawn or sell is valuable enough, Dan will send a limo to pick you up and welcome you in by a separate entrance.

His bread and butter comes from the pawn business. “Many people don’t have bank accounts,” he explains. In exchange for collateral, Dan loans them cash. If they repay on time (usually within sixty days), he returns the collateral and collects interest on the loan. Articles not redeemed can be sold.

What kinds of collateral will he accept? “Anything that doesn’t eat or require gas,” says Dan. Local musicians sometimes pawn extra instruments while they are on the road; with Dan’s bonded and insured warehouse space, they know their instruments are safe, and it’s cheaper than renting a storage unit.

Back when patron saints were being assigned to various professions, St. Nicholas took pawnbrokers under his wing, along with sailors. When you consider the number of people Richard Dan has helped, “the St. Nick of Market Street” might be a better soubriquet for this unofficial mayor.

Nationally, 80 percent of pawnshop clientele reclaim their collateral on time. Dan’s average is 93 percent. “People pawn items they have an attachment to. They prefer to redeem them.” Dan makes it easy to do so. A wall filled with testimonials backs up his claim that “I hear ‘God bless you’ all the time.”

The days after Christmas are his busiest; people need cash to pay holiday bills. But the weeks before will see Mauians pawning (and buying) everything from Hawaiiana to samurai swords. True to his patron saint, Dan is happy to make Christmas wishes come true.

But there is one difference between the historical St. Nick and the one in Wailuku: Richard Dan is here almost all the time. Just look for the golf clubs on the sidewalk, or the Amazon arawana swimming peacefully in an indoor tank. No, it’s not for sale. The neighborhood kids wouldn’t allow it.