Story by Becky Speere | Photography by Ryan Siphers and David Watersun, and courtesy of Napili Kai 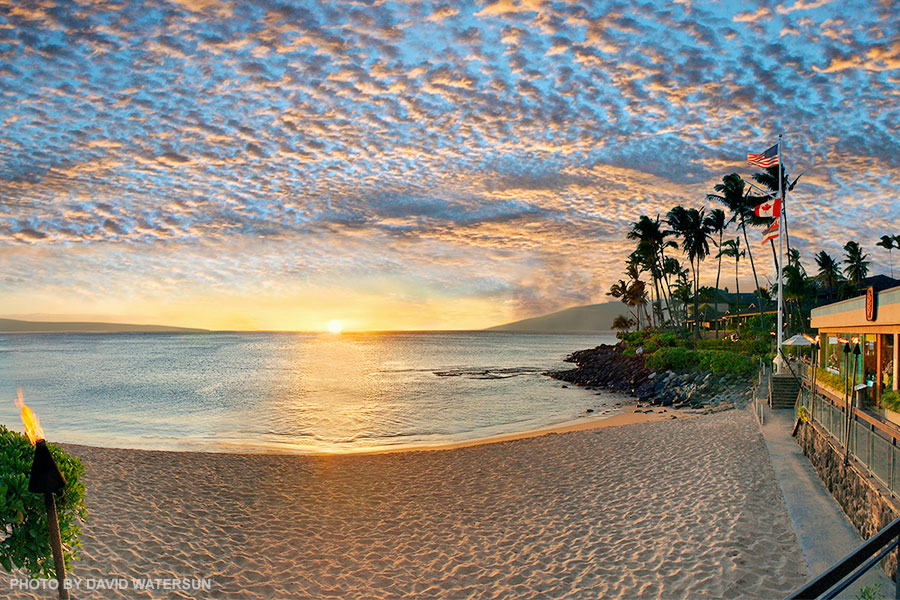 Fifty-year-old award-winning restaurants are a rarity on Maui, but as of 2014, the Sea House at Napili Kai Beach Resort can claim that distinction. Over the years, the readers of Maui No Ka ‘Oi Magazine have bestowed six Gold and three Silver ‘Aipono Awards on the Sea House, including this year’s Gold awards for “Most Maui-est” restaurant and Best Bar.

In 1960, Maui had only a handful of small hotels. Even Ka‘anapali, Hawai‘i’s first destination resort, was several years from opening. That’s when Canadians Margaret and Jack Millar, tired of vacationing in Waikiki, decided to venture to the other islands. On Maui, they found a secluded parcel. It was covered in kiawe trees, but bordered an untouched white-sand beach, beyond which lay a long coral reef for snorkeling. Envisioning a half-acre Shangri-La for friends and family, the Millars purchased the land and built an intimate boutique hotel.

The restaurant opened in 1964 as the Tea House of the Maui Moon. In the early 1980s, a public relations firm on O‘ahu thought “Tea House” connoted “light and oriental fare” — neither the food nor the image the management meant to convey — and so Tea House became Sea House. A dinner menu from that time offers a choice of New York steak or lobster tail, with all the fixings, for five dollars. Ice cream was extra.

From my vantage in the dining room at Sea House, the panoramic ocean view envelops me just as it always has. I smile as I reminisce about hula shows performed here in the 1980s, when Napili Kai employees and their children were the dancers and musicians. In 2004, Hawai‘i’s longest-running keiki (children’s) hula show moved to the property’s Aloha House Pavilion (where Grammy Award-winning George Kahumoku also orchestrates some of the best slack-key guitar in Hawai‘i). There, it continues to perpetuate the legacy of Hawai‘i through music and dance. Last year, thanks to funds raised from the show, the Napili Kai Foundation awarded $10,000 in scholarships to children of the hotel’s employees for continuing education.

In June, to celebrate its fiftieth anniversary, the Sea House debuted a fresh new design and furnishings: a recessed ceiling of anigre (an African hardwood), bamboo tabletops, and room dividers of light-green glass whose sculpted waves create a metaphorical ocean below the original lava-rock wall that runs the length of the dining room. Elsewhere, the ocean view is literal; expansive windows look out onto wide Napili Bay in its many shades of blue, and across the channel to the islands of Lana‘i and Moloka‘i.

That menu is designed around freshness and quality. “I have two fishermen who bring me fish caught the same day,” says Erickson. “This wouldn’t happen on the mainland. And backyard farmers come by the delivery door to sell their homegrown produce. Just-harvested liliko‘i [passion fruit], apple bananas, and the sweetest Haden mangoes . . . it doesn’t get any fresher than that.”

Chef’s new menu offers a wide selection of dishes, including gluten-free appetizers like yin-yang sushi and steamed vegetarian dumplings. His sushi, a seaweed roll of protein-rich red and white quinoa, avocado, and a wasabi-soy dip, gets my vote, as do the mushroom-filled, steamed dumplings.

As executive chef — a position he’s held here for more than seven years — Erickson is in charge of purchasing and staff management, as well as menu planning and recipe creation. So I blink in surprise when he says, “I came to Maui for a change of pace. I managed all twenty-five units of Gordon Biersch’s restaurants across the USA, and after being in the industry at this level for so many years, it was time to slow down. 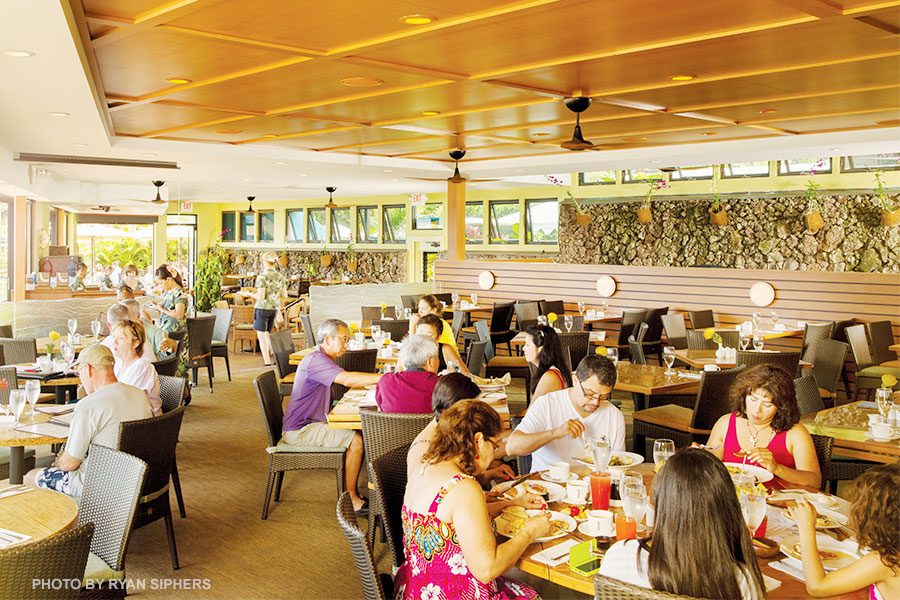 “Coming to Maui and Sea House has given me a chance to work with some of the finest local ingredients and work side by side with people I consider ‘ohana [family].”

It’s a sentiment echoed by many of the employees. Among them is Verna Biga, assistant manager of catering, food and beverage, who has worked at Napili Kai for thirty-two years.

“Many families have come here for decades,” she says, “so we’ve fed their children, and now their children’s children. When they check out, they book for the following year. We have one such group of twenty-one people. The first week [they return] is the dad’s birthday, so we make the macchiato ice cream cake, his favorite. The following week, they celebrate three birthdays, for which we prepare the same buffet menu year after year, including macadamia-coconut shrimp, lani [heavenly] ribs, teriyaki steak and crispy sushi. Another family with forty-five members comes for their annual Christmas dinner and stays through the New Year.”

As we sit at a table overlooking the dining room and bar, I see my favorite pupu (appetizers) being delivered to guests: Manila clams in garlic butter, smoked kalua pork tucked into tortillas with avocado aioli, and the “Maui Beach Ball” — a deep-fried, panko-crusted combination of rock shrimp, mahimahi, and pepper jack cheese with a spicy remoulade dipping sauce.

Wade says, “Chef offers a prime-rib dinner twice a week and surf-and-turf three times a week; many times it’s a sell-out. And in honor of our fiftieth anniversary, we created the $19.63 Rollback Dinner Special, available until the end of 2014.” The special is beef short-ribs braised in Maui Brewing Company’s CoCoNut PorTeR, grilled herb-marinated freshwater shrimp, a juicy bacon-wrapped scallop, purple Moloka‘i sweet potatoes mashed with sweet butter, and garden-fresh asparagus. . . . I see a need to come back. (When I ask Wade why the price isn’t $19.64, he explains that the restaurant actually opened in late December of 1963 — so late, it barely counts.)

As part of the fiftieth-anniversary celebrations, the Sea House is also hosting weekly drawings for a $50 dining certificate. At year’s end, one lucky winner will receive a five-course Na Hoku dinner for two, valued at $275.

Although Margaret and Jack Millar are no longer with us, they must be smiling down on their Napili Kai‘ohana, who carry on their traditions of sharing aloha spirit and great food with friends and family. No wonder Sea House was voted “Most Maui-est.”