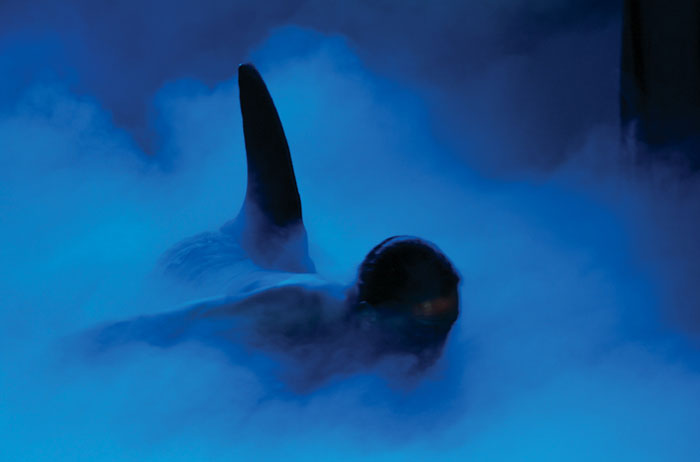 Ten years ago, ‘Ulalena, named for Ha‘iku’s reddish-yellow twilight rain, debuted at the Maui, Myth & Magic Theatre in Lahaina. For island entertainment, the show was highly unconventional, combining stilts, aerial feats, puppetry, ballet and modern dance with Hawaiian hula and chant to tell the story of Maui—and hiring and training local talent to do it.

Despite the naysayers, ‘Ulalena hit the million-viewer mark two years ago, and celebrated its tenth anniversary this past summer.

The company’s success has everything to do with its origins, serendipity, and the man who became ‘Ulalena’s producer and managing partner.

Roy Tokujo is an O‘ahu businessman and entrepreneur with nearly half a century in Hawai‘i’s hotel, restaurant and entertainment industries. In the 1990s, he was in Las Vegas, creating a lu‘au show, and mentioned to a colleague that he dreamed of producing a different kind of performance for Hawai‘i, something along the lines of a cirque, but that no one in the Islands had the expertise to bring it to life. The colleague introduced Tokujo to the French Canadian company ARRA-Montréal.

Around that time, the Harold & Jeanette Weinberg Foundation, landlords of the Old Lahaina Center, were looking for an anchor tenant for a vacant space that had previously housed a grocery. “The Weinberg people had worked with Roy on O‘ahu,” says Preussler. “They approached him about doing something with the space.”

What Tokujo did was spend $4 million remodeling the venue, raising the roof thirty-five feet and creating a 680-seat theater. He brought the French Canadians—now partners in the project—to Maui, and for eighteen months, they met with kupuna (elders) to discuss the content of the production, and make sure this unconventional approach to the storytelling would have cultural integrity.

The result is a production that immerses the audience in a powerful emotional experience through a multilayered performance of music, dance and visual effects. Beginning with the Kumulipo, the Hawaiian creation chant, ‘Ulalena interweaves the natural world with myth: the demigod Maui pulling the Islands out of the sea with his fishhook; Pele, the volcano goddess, creating new land with her lava flows; Kamapua‘a, half man, half boar, pursuing Pele as her would-be lover. Canoes arrive, bearing the first Polynesian voyagers to Hawai‘i, and then, in succession, the production follows the history of the Islands from village life to the arrival and influence of the outside world.

One physical challenge the venue presented was a lack of space offstage to store large pieces of scenery or props.

“What’s amazing is what the French Canadian team was able to do with no huge sets,” says Preussler. Lighting, images projected on scrims, and an ingenious use of fabrics evoke the various scenes. A cascade of silk descends from the ceiling to create the illusion of a waterfall. Another, in fiery red, flows like magma behind the actress portraying Pele.

And then there is the stage itself.

“It’s such a living piece, with its different elevators and motors,” says Preussler. “They built the stage in Canada, shipped it in pieces and assembled it here.”

By design, ‘Ulalena resonates differently with each viewer.

“It’s like a tasting menu,” Preussler says. “Nothing is a complete story. The show is about experience, not about ‘This is how you should think.’”

The use of kaona, the multiple layers of meaning in Hawaiian culture, fosters different interpretations.

“We brought in Kamehameha Schools,” Preussler says. “At the kapa-beating part of our show, the kids were laughing, because they understood the kaona.” The women onstage were chanting about kapa, but were also subtly gossiping about the men sitting a few feet away, obliviously pounding poi.

‘Ulalena weathered 9/11, and is holding its own in the current economic downturn, but like businesses everywhere, the company has had to adjust to survive. The initial two shows a night, five nights a week, have been pared down to a single show on four nights. Seventeen jobs, mostly in ushering and concessions, have been eliminated. To help defray expenses, ‘Ulalena rents out the theater for fundraisers, pageants and church events, and several years ago launched its own direct-marketing campaign promoting ticket sales, to supplement concierge and activity-desk referrals. And to better reflect the production itself, the company changed the venue’s name from “Maui, Myth & Magic” —which to many implied a magic show—to the simpler  “Maui Theatre.”

Preussler says that being a small company, able to adjust and act quickly, has helped ‘Ulalena to survive. He thinks the current economic climate has made them more efficient, smarter and creative.

Even challenges from new ventures like the Hyatt’s Cirque Polynesia don’t worry Preussler, who considers the new show “somewhat of a blessing. Other than l¯u‘aus, there aren’t many evening activities. Maui is in bed by 10 p.m.” With the opening of Cirque Polynesia, ‘Ulalena has actually seen a bump in business, which Preussler attributes to increased buzz for the genre.

And he’s convinced that ‘Ulalena has realized Roy Tokujo’s dream to have a cirque-style production that appeals to kama‘aina. Preussler estimates that at least 20 percent of the audience each night is local.

“We get a lot of word of mouth from the community,” he says. “We and the Polynesian Cultural Center are the rare [productions] kama‘ainas go to.”

In September, ‘Ulalena will celebrate its ten-year anniversary by offering Hawai‘i residents 1999 ticket prices.    For information, call 877-688-4800 or visit www.mauitheatre.com.