This Labor Day weekend, 2,500 paddlers from Hawai‘i, Tahiti, Australia, New Zealand, Hong Kong, Japan, Canada, and both U.S. coasts will descend on the Big Island for three days of competition, celebration, and camaraderie. Most of all, they’ll come to test their mettle in the Queen Lili‘uokalani Canoe Race, the largest long-distance outrigger canoe race in the world.

It’s an impressive turnout for an event that started forty years ago as a practice run for the Moloka‘i Hoe—that grueling, forty-mile men’s paddle across the treacherous Kaiwi Channel between Moloka‘i and O‘ahu—and its female counterpart, Na Wahine O Ke Kai (Women of the Sea). This race follows the Kona coastline, where calm waters make a huli (boat flip) less likely, allowing teams to focus more on paddling techniques and less on staying upright.

The race is named in honor of Queen Lili‘uokalani, Hawai‘i’s last ruling monarch, and was first held on her birthday, September 2nd. The Kona-based canoe club Kai ‘Opua organized the race in 1972 and has hosted it ever since.

Outrigger-canoe racing is an ancient sport in Polynesia, but the sight of sleek boats powered by teams of muscled paddlers disappeared under the nineteenth-century ban that early missionaries imposed on Hawaiian culture. Lili‘uokalani’s brother, King David Kalakaua, who preceded her to the throne, reinstated the sport in 1876 as part of his efforts to revive Hawaiian arts, language, and other cultural practices. Outrigger racing has remained a part of Hawai‘i’s water heritage ever since, and is now the state’s official team sport.

For the first two years, the Queen Lili‘uokalani was a men’s race, with kane paddling wa‘a kaukahi (single-hulled canoes). The wahine joined the competition in 1974 and now paddle the eighteen miles from Kailua Bay to historic Pu‘uhonua o Honaunau, royal grounds for Hawaiian ali‘i. The men reverse the route, bringing the same boats back to the start. The relay eliminates the need to shuttle a six-person canoe back after an adrenaline-packed, one-way surge; it also makes this race one of the few in the world where men and women compete long-distance on the same day.

The nature of outrigger paddling probably contributed to the growth of the Queen’s race. Maui paddler Mael Carey says, “Outrigger-canoe racing is a sport that generates relationships.” As Hawai‘i teams started competing elsewhere in the Pacific, word of their homegrown race spread, capturing the interest of the broader paddling ‘ohana (family). Participants coming from great distances translated into a demand for more time on the water. As organizers added more events, more paddlers came. Now that the race spans three days, athletes can compete in double-hulled canoes (wa‘a kaulua—two single-hulled canoes rigged together), individual outriggers, on standup paddleboards; with mixed teams, or in the teen divisions. Divisions by types of boat range from 400-pound, forty-foot traditional canoes to the newer, lighter fiberglass boats. 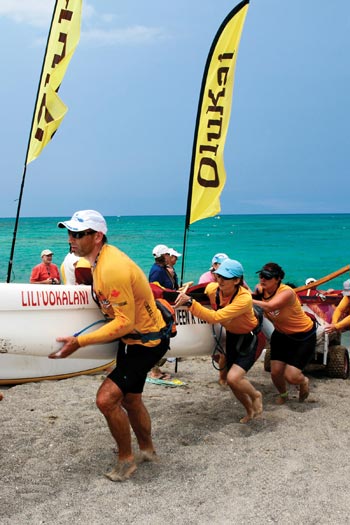 Compared to the Moloka‘i Hoe, the Queen Lili‘uokalani race may seem like an eighteen-mile jaunt, but that doesn’t mean it’s not challenging. For one thing, the majority of participants paddle it “iron,” going the whole distance without a support boat or relief crew. The flat waters mean very little “bump” or boost from the waves; forward motion comes only from the unrelenting thrust of six blades pulling against the water. And it’s hot. If you’re among the best, it’s two hours in the blistering sun; the slowest teams clock in at three hours or more.

“The heat is more exhausting than the paddle,” says Jamie Woodburn, who has raced in the Golden Masters Division. “Maybe that’s because the women go earlier in the morning, and the men return in the heat of the day. And it’s always chaotic at the start, as is any large race with limited space around the start lines, and with all the canoes and support boats jockeying for position. But it’s a beautiful race.”

Top conditioning and impeccable teamwork are essential. “All the pieces of the puzzle have to be there for it to work,” says Carey, who has participated every year since 2000. His first time paddling with a winning team at Kona was in 2006, with Maui’s Hawaiian Canoe Club. Carey now paddles with the elite Team Primo, a group of Maui watermen who compete at the professional level. For the last two years, Team Primo has taken top honors in the men’s single-hull iron.

Dave Quisenberry, who paddles with Hawaiian Canoe Club, first participated as an eighteen-year-old, as part of a nine-member crew, doing open-water crew changes. “At the time,” he says, “it was the hardest thing I’d ever done.” Not hard enough to deter him from coming back multiple times over the next fourteen years. Last year he paddled “stroke” position, competing in the iron, setting the pace, rhythm, and intensity for the crew. “The start is really impressive,” he recalls, “with more than a hundred boats in the water, and because it’s flat, you can see everyone.” “Everyone” is a colorful swath of canoes lined up across almost a half-mile of water, six pumped paddlers in each one, team names emblazoned on hulls and shirts, waiting for the split-second signal to launch several hours of all-out synchrony.

Last year, the overall event stretched into Monday for the first time with the Ali‘i Challenge—a seventeen-and-a-half-mile mixed race that heads north to finish at Kona Village. Teams include six men and six women, who each paddle half the race, with an open-water exchange midway. But the first wa‘a to cross the finish line might not be the overall winner. The land component requires teams to haul their canoe ashore, unrig it, and then follow clues to find a set of hidden objects. Race organizers promise a different set of tasks each year.

The Queen’s draw is more than just competition. International teams are welcomed on Thursday night, with most participants arriving the next day. Friday morning, a mellifluence of languages and accents can be heard up and down Kamakahonu Beach, fronting the King Kamehameha Hotel. Crews line the strand, rigging their canoes and sizing up the competition. Quisenberry says the pre-race scene offers a chance to check out the other boats: “Who has the newest mold, who’s got the koa canoes, whose boat is that?” It might also be a once-in-a-lifetime opportunity to join a crew; one year Quisenberry’s team was short and picked up a novice paddler on the beach, who helped achieve their overall goal—having a great time.

The Kona venue offers plenty of opportunity to renew old ties, meet new entrants to the sport, and rub shoulders with some of the world’s most toned. You can do the iron on the first day, party that night with local music at the hotel, and do a double-hulled or one-person race the next day. Award ceremonies and a lu‘au may also beckon, but the evening spectacle not to miss is the gathering at dusk on Saturday: 500 paddlers light up the sky as they march down Ali‘i Drive, carrying bamboo torches—honoring individual paddlers, the teams, the sport, and the spirit of the race.

Carey sums it up: “It’s important in outrigger paddling that we honor the past and those who came before.” At forty years and counting, the race bearing the queen’s name is doing just that.

Cheer on your favorite wahine at the start and kane at the finish in front of the King Kamehameha Hotel. Take in the craft fair near the pier in between the races, or spend the day on the water in a ringside seat aboard Blue Sea Cruise’s Spirit of Kona tour catamaran, or Body Glove’s Kanoa II; both vessels also shuttle race participants to and from starting locations. Check out some of the local historical sites with visits to Pu‘uhonua o Honaunau, the ancient place of sanctuary where kapu breakers could take refuge, or Hulihe‘e Palace in Kailua, where Queen Lili‘uokalani and other Hawaiian royalty regularly vacationed. For more information: www.kaiopua.org/ ql-event-schedule.asp